IN 2006 the Triumph Daytona 675 turned the supersport market on its ear. Here was a real option for 600cc supersport class enthusiasts who thought supersport bikes only came out of Japan. 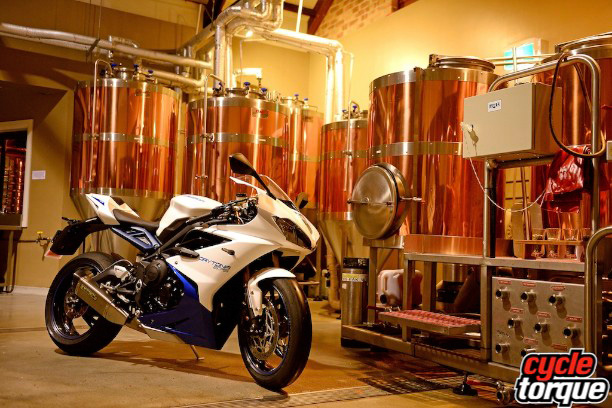 The Daytona 675 proved the Poms did know a thing or two about producing proper sports bikes for the road. I remember watching Gary McCoy at Phillip Island ride out of his skin on a 675cc triple, with the rasping exhaust note identifying it almost before you saw it.

And while it was a fantastic bike it was starting to look and perhaps feel a bit dated. Finally Triumph has seen the light and given us the biggest facelift in the model’s history for 2013. 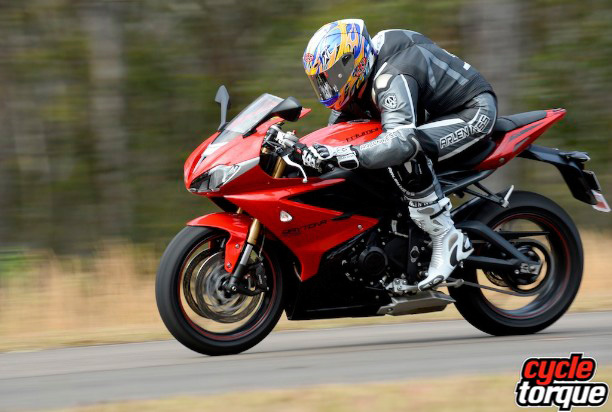 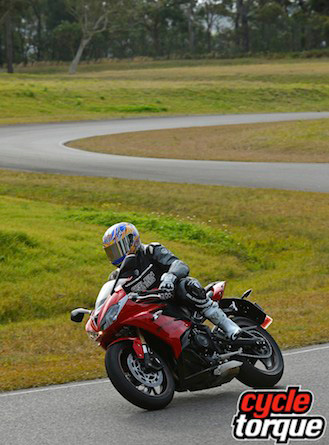 There’s no denying the old 675 had an arse up attitude about it, and the suspension was quite firm. It still is firm, but with a lower seat height and therefore a better relationship with the footpegs and handlebars, you don’t feel like you’ve been mauled by a randy Orang-utan every time you ride the bike on the road for any real distance.

What’s new?
There’s quite a few changes to the engine for 2013. It’s more oversquare for starters, and this was aimed at producing more torque, and the wet liner set-up has been replaced by Nikasil lined bores. The camshafts now produce more valve lift, and the valves themselves are lighter. In fact Triumph says the valve train is 10 per cent lighter. Compression is up slightly too, to 13.1.

There are twin injectors per cylinder, larger big end bearings, bigger air intake, new selector design in the gearbox, a slipper clutch, and the one which really shows up, the low exhaust, getting rid of the underseat exhaust which was looking decidedly old hat. The more things change… All up these improvements get the triple to 128 hp, which in reality will be around 16-19 hp at the back wheel. 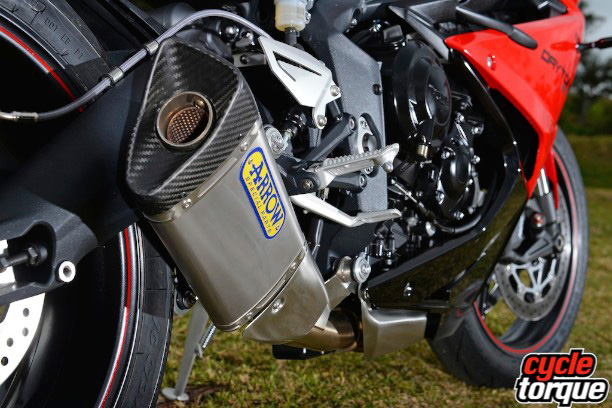 Styling has obviously been updated, and while it looks similar to the previous model it does make the old one look very dated. Suspension is still KYB front and rear, with the centre-fixed cartridge forks being a substantial update. Like the forks, the rear shock is fully adjustable.

While the bikes on the launch didn’t have ABS fitted by the time you read this all bikes coming into the country will have ‘switchable’ ABS as standard, with Road and Track modes, and of course it can be switched off too. 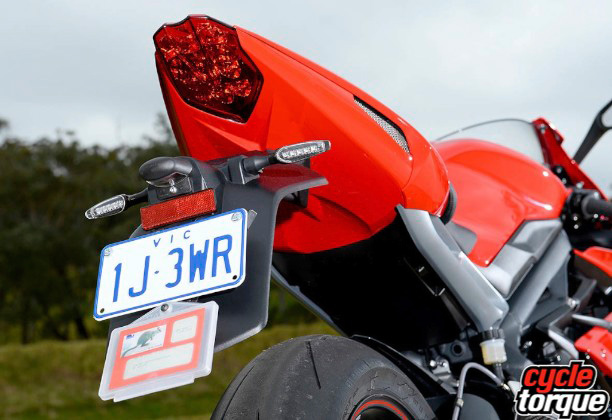 Track
Straight away I noticed the riding position change, and boy was it a change for the better. You now sit in the bike rather than sit on top, and this suited me much better. Seat height is now 10mm lower, and the handlebars 5mm higher.

On the first exploratory laps the other thing I noticed was the extra torque in the engine. While it’s not much of an improvement on paper you can feel it. It’s helped by a one tooth smaller front sprocket too, but it’s noticeable and nice. 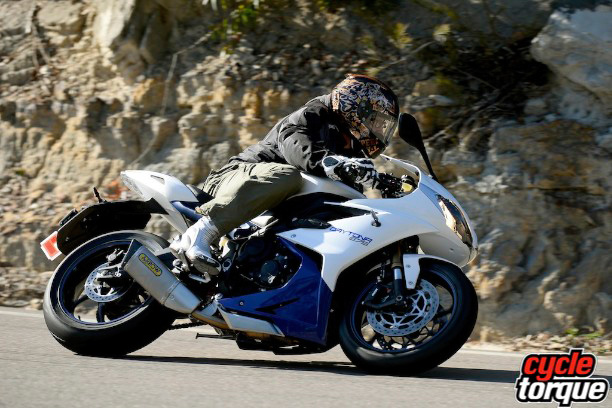 Once the pace started heating up the bike felt ultra stable, and tipped in sweetly. I always found the previous 675 to run a bit wide when riding hard but the 2013 model holds its line beautifully.

Looking at the specs gives a clue to this. The wheelbase is 20mm shorter, the rake had been reduced by one degree and the trail increased. Also there’s more front weight bias now, with 52.8, one per cent more than before. All of this doesn’t sound much but put together has transformed the way the bike behaves on the track. 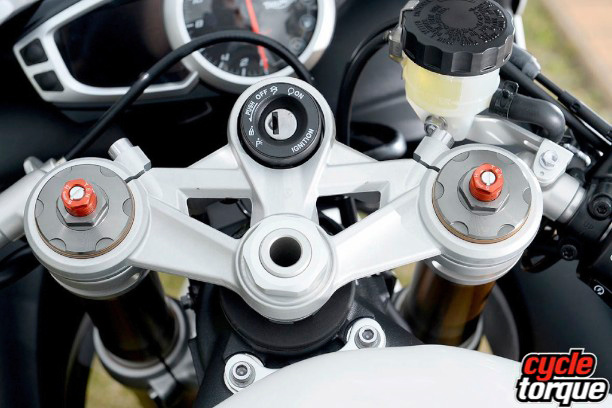 Another plus is the way you can brake deep into the turns, with the Nissin four-piston calipers giving loads of power and feel. These are simply amazing, and up there with the best I’ve used. A few times I rushed into a couple of corners a bit hot but got away with it because of the brakes and the handling.

A couple of test bikes had both a quick-shifter and Arrow pipe fitted. They did sound very nice thank you, but more importantly the quick-shifter made life easy on the track. If you are planning on doing some ride days or racing one, fit a quick-shifter. You just plug the factory unit into the wiring harness and away you go. 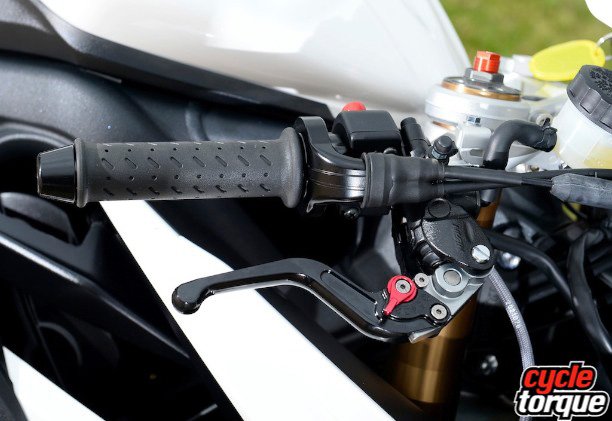 Road
Some of our test route had some rough road surfaces and the bike likes to let you know it doesn’t really like pot holes and bumps. You expect that though, and the ‘softer’ riding position helped here too.

At speed there’s a fair bit of wind blast on your head too, something you don’t notice as much on the track because you are trying to bury yourself under the screen most of the time. A double bubble screen would definitely help here. 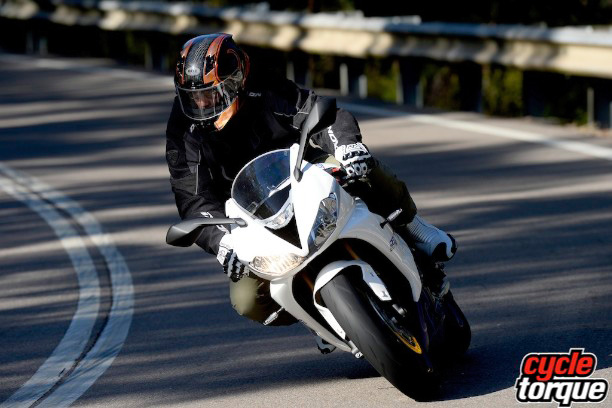 On the smooth tarmac on day two of the launch you could really tell how much it had improved on the road compared to the previous model. Suspension did feel a little plusher, but there wasn’t much in it. But it did hold it’s line better, and overall the bike felt more ‘planted’.

On the road I also loved the lower gearing, and the extra torque and power. I know the lower gearing helps to create the feel of more torque but as a package the engine feels both livelier and easier to ride.

Top speed is somewhere in the nether regions, and although I didn’t explore it totally I think about 240 km/h, more if you are smaller than me. Triumph claims the peak power is produced at 12,500 rpm but it did feel as though it was going harder after that. 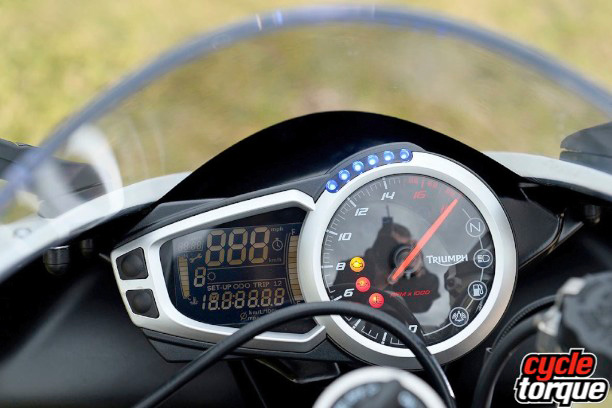 The rev limiter chimes in at around 14,700 rpm but there’s no doubt the bike would prefer you to change gears before that. As for the gearbox changes, I never had any issues with the old one and the new one feels sweet too.

The instruments are similar in look to those found on a few Triumph models, but you can get into these ones to change your shift lights, and activate the lap timer if you are track focused. There’s plenty of info on hand at any rate. You can even go for the accessory tyre pressure monitor, and any discrepancies can be seen via the instrument panel. 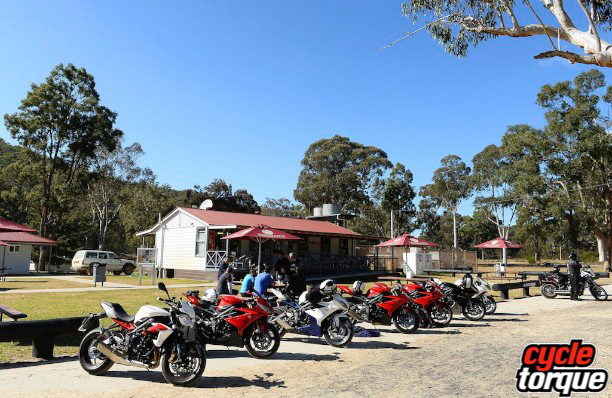 Build quality is very high too, and there’s a long list of accessories to compliment your machine. From trick looking CNC machined parts, to anodised bits and bobs, through to engine and frame protectors. You really can make this bike look like the dog’s bollocks, matching its performance you might say.

Verdict
I wasn’t able to ride the new and old models back to back but I’ve done enough miles on previous 675s to know the 2013 model is a better bike, no risk. It’s exhilarating to ride, and not just because it goes better.

Triumph’s attention to detail on the new Daytona 675 shows the British company has done its homework and got an A + as a result.

BEFORE riding the KTM 1290 Super Duke R I had it in my head it would be a fire-breathing thing with minimal road manners and not much in the way of any creature comforts. […]