TEN years ago, I wrote a column titled ‘The legend will live on’ as a tribute to the passing of Barry Stephen Frank Sheene on 10 March, 2003. Such was the life force of the Cockney-turned Aussie that it was always guaranteed that his spirit and influence would live on for his fans all around the world, and particularly in the country that he called home from 1987.

With his irreverent and don’t-hold-anything-back commentary of both bike and car racing, Sheene never lost his Bow Bells accent. But he was a proud and naturalised Australian, and was happy to say so. When Sheene left us in 2003, Casey Stoner was just about to commence his second year in grand prix after a rocky initiation in the 250 class. If you do believe in the after-life and presuming that Baz made it to heaven, you would expect that he would’ve watched on with great joy as Stoner emerged from several tough years in the 125/250 ranks to jag a ride with the middle-performing Ducati squad, and wiped the floor in 2007 to grab the most astonishing world title since Freddie Spencer’s effort in 1983.

The fact that Stoner dominated Sheene-torch bearer Valentino Rossi would’ve been bitter-sweet. While Sheene and Rossi share an incredible charisma that transcends all cultures and borders, Bazza would’ve admired Stoner’s searing Aussie honesty and ability to get the job done w hen the pressures were unrelenting. While he would’ve delighted in Stoner’s success and his white-hot rivalry with Rossi that culminated in the Italian recapturing the world title in 2008, Sheene would’ve be excited too by Jorge Lorenzo’s ascension to MotoGP and his world title. I guess we all miss Bazza’s race calls, so just imagine how much better these rivalries would’ve been with Sheeney roaring down the mike. Baz knew what rivalries were all about.

When Kenny Roberts ventured to Europe in 1978, Sheene stirred things along as much to get under Kenny’s skin as to elevate the world 500cc championship in the mind of the general public. As Stu Avant once told me, the 1970s was the era when bike racing went from black and white to colour. You can imagine Baz dialling up the red-blue-yellow pixels to full PAL(D) with his uncanny sense for PR, and his ability to make the most of his comebacks and many controversies. Our sport boomed when Baz was racing, and grew to another level in his retirement.

If he had mixed emotions about the Stoner-Rossi years, what must Baz think of his record of being the last Englishman to win a 500/MotoGP still being intact? August 16, 1981 marks the moment when Sheene won his final GP at Anderstorp. With Cal Crutchlow scoring two podiums in 2012, Baz would’ve said, “close, my son, but not close enough, but now you know how hard it will be to make the step to the top spot. Just keep working.” He would take no delight in the record still being his. 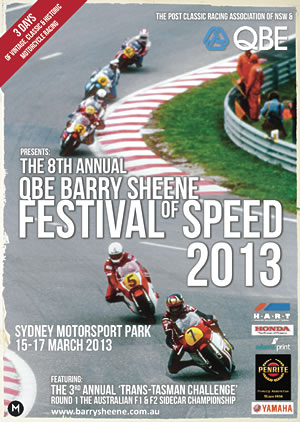 Equally, he would be proud of the work done by his replacement at Network Ten. Daryl Beattie was an emerging TV talent when Bazza passed on, and for the past ten years he has ably filled those sizeable shoes when dissecting the ruminations and nuances of both MotoGP and Formula One. He may not have Barry’s overwhelming desire to speak his mind, or his electric charisma (who does?) but Dazza has done his best to match the expert analyses that Bazza set such a high standard for.

If you want to believe that Barry’s legend has lived on, look no further than D. Beattie. I did manage to see Barry race just once at Eastern Creek in early 2000 on his Manx Norton, but he wasn’t keen to go out after surviving a nasty 160km/h highside at Phillip Island just a few weeks prior. He was pretty beaten up, and was a bit leery of the Norton letting go again, but Baz being Baz, he didn’t want to let the promoter down and gave it his best shot. Just to add to his pain was that his arch-rival of the ’70s Phil Read was racing too, but it appeared the two were getting on fine with the bitterness and jealousies of yesteryear consigned to the past.

After Barry’s death, the promoters of the event renamed the meeting the Barry Sheene Festival of Speed in honour of the bloke who said he would have a double-lobotomy before he took up racing again, but ended up donning the black Dainese leathers anyway. The event’s organisers have always said that it is much more than a race; it’s a celebration of what Barry loved about racing as a boy, and all the way through to becoming world champion with all the sights, sounds, smells, colours, and logos of the era in which he raced. This year’s BSFOS was no different.

And even if it wasn’t as star-laden as previous years, all those essential elements were still there. Ten years on, the legend well and truly lives on. I was even inspired to give Cycle Torque editor Picko a hand with the Honda 500 he was racing at the BSFOS. I’ve had lots of experience removing and re-fitting Honda fuel tanks, so I was happy to oblige when a hot and bothered Picko needed to check the valve clearance of cylinder # 3.

Wandering past Sam Machlachlan’s pit, John the owner of the 1980 TZ350 he was racing was having a bit of trouble getting the bike back together with one hand badly broken and swollen, so I helped fit and fasten one-side of the fairing with Sam completing the other side. That’s the sort of meeting the BSFOS is. We can thank Barry for that.

Just how much can one man learn from motorcycles? […]

On Any Sunday Too

ON ANY Sunday’s place is motorcycle history is assured. The same can’t quite be said for the imitators and its sequel.
The American-made classic inspired an Australian version Naturally Free that was released in 1975. […]