I GUESS I’ve known most of my life that I have the tinkerer bug inside me.
Ever since I was in my teens I’ve struggled to leave mechanical things alone.
I wouldn’t call myself a collector, but at last count I owned or part owned around 10 motorcycles, and a few old muscle cars.

I never set out to collect this many but it just seemed to happen. I try to rationalise this sickness as it being my hobby, but the problem is it seems to take up so much of my time, and of course money. My wife would be dead set sick of hearing me say: “I’ve always wanted one of those”.

In my mind I have a plan to restore each bike and have them on display. I’m even building a new shed to house some of these bikes and cars. I say some, because even though the shed is a decent size I think it will be quickly filled.

At the moment I’m sorting the engine of a Honda CB500/4 Post Classic race bike which had issues at the last Barry Sheene Festival of Speed. There was some slightly dodgy work inside the head which decided it couldn’t cope with the stresses of racing, so an engine out job and some plans for the repair is now underway. 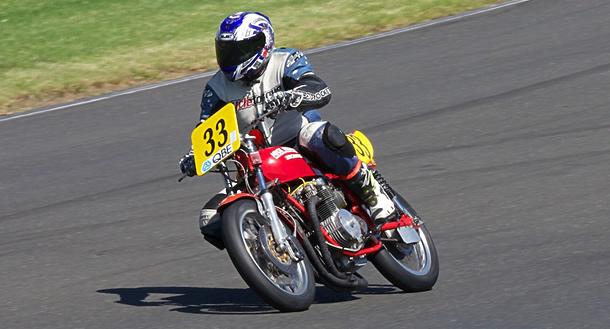 Then I was thinking about building a big bore engine for it to run in the 750cc class. Mmm, all good fun. I’ve also got a 1984 Honda VF1000F race bike which has lots of exotic ex-factory looking bits on it. Peter McWiggan from Manta Engineering in Victoria put 17 inch wheels on it, and some other bits I can’t exactly remember right at this moment, and because there’s lots of stuff stacked on it I can’t even get to it all that easily to refresh my memory.

The plan when my new shed is finished is to turn my current 7m x 4m workshop into exactly that, a workshop. I can then bring my lathe home from where it’s stored at a mate’s place. Currently the workshop is a mess, with everything from a small block Chev V8 for my son’s HT panel van to fishing rods in it.
Plus the family seems to think if an item needs to be moved then it goes into my workshop. I can imagine the CB500 sitting up on the stand being prepared for the next meeting, while the VF1000 gets restored somewhat back to its factory glory.

I think that one will take pride of place in the new man shed, besides the Ducati 851 I’m riding at this year’s Manx GP on the Isle Of Man. Yes, even though I need another bike like I need an enema, I’ve agreed to buy the 851 because it will be a big part of my personal history. I might try to get the price down though, I reckon it will be worn out after I complete 10 laps of the IOM circuit on it. Haven’t worked out how to pay for it yet though.
Maybe I need to sell a few bikes first.

Other projects on the horizon are the aforementioned 1970 Holden HT panel van which is being what’s called resto-modded, with a modern transmission and gearbox and other cool bits. I’d also like to build a stroker small block for my Dodge Dart, and restore the little early ’70s Honda Benly, and fettle the 1979 BMW R 100 RS my mate and I just bought for a tasty business project that’s germinating in our fertile minds.

Looks like I’ve got enough projects to last the rest of my life at this rate, but possibly not enough earning capacity to do them all. I do find it difficult to get up to the shed in winter because it’s dark when I get home, but I love Daylight Savings as it lets me get lots done when I get home, leaving weekends free for fun.
I call my workshop my escape pod, and at times there’s nothing better than tinkering away on some meaningless project with some music streaming in the background, and a bourbon and coke to gulp down. I think I’ve come to accept that this is who I am, no use fighting it. I think I’ll always have some project to mess around with, otherwise I’d be as bored as I would be watching a croquet match.

I WATCHED a show on TV the other day called The Unrideables. It was basically about the 500cc World Motorcycle Championship from 1987 – 1989. […]

THE DEPARTURE date for Cycle Torque’s Adrenalin Generations assault on the Isle of Man is coming around fast – we’re racing this month! […]