THERE IS something very special about Ducati’s 8-valve sportsbikes. The basis for Ducati’s superbike racers, the desmodromic valve liquid-cooled machines are expensive, high maintenance bikes with stiff suspension, an uncompromising riding position, useless mirrors, ridiculous pillion accommodation while also being noisy, cantankerous, a hassle in traffic and prone to failure.

Put me down for a couple.

Because, on the other hand, they are also incredibly rewarding to ride fast, that uncomfortable riding position feels perfect when your knee skims the bitumen, the hard suspension providing incredible feedback when flipping through a set of S-bends, that cantankerous engine howling as it heads toward redline and the sense of satisfaction a sportsbike rider feels after conquering a winding road or track on an 8-valve Ducati something to be savoured.

For all their compromises – and there are less now with the current Panigales than ever – a Ducati Supersport is a machine every sportsbike fan should own before they are too decrepit to ride one.

The 959 Panigale replaces the 899 Panigale… Ducati had to update its smaller Superbike because it didn’t comply with the latest European noise and emission laws. With a more-restrictive exhaust a new 899 would have been down on power and torque compared to the older model, so rather than suffer that fate, Ducati redesigned the bike and built the 959.

There are many, many changes, but luckily Australian’s don’t get the awful ‘shotgun’ exhaust some markets have to put up with – we still have the underslung MotoGP-style muffler.

The 959 adopts the 1299’s silhouette, with a wider front fairing and screen for improved aerodynamics, split tailpiece design, new mirrors and improved footpegs among the changes.

For those of us who don’t buy bikes for our mates, let alone have 11 of them, you do get a lot of technology if you choose to spend your hard-earned on a 959 Panigale. There’s Ducati’s quickshifter, various riding modes, ride-by-wire throttle, traction control, ABS and engine braking control. 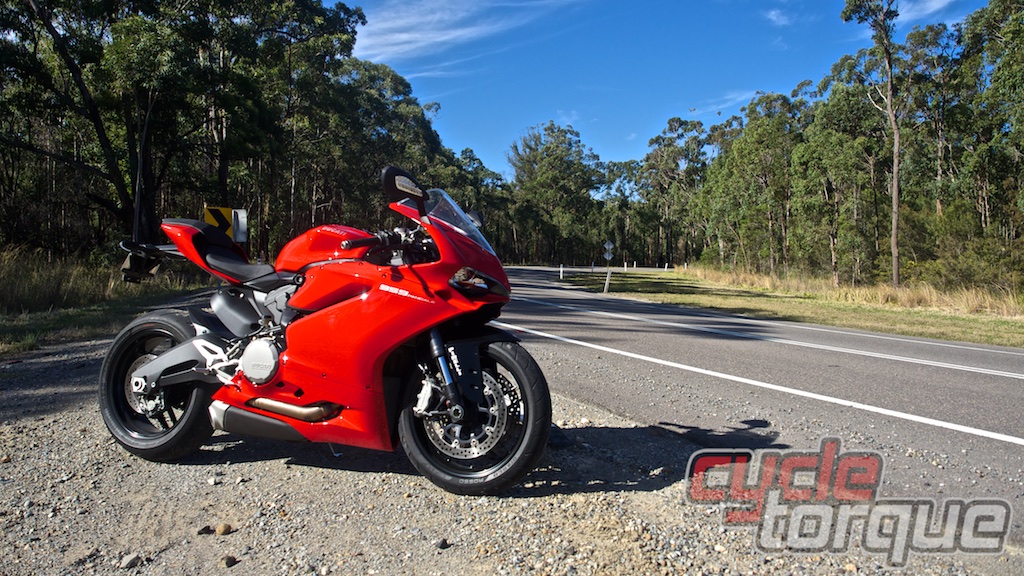 Ducati concentrated on making the 959 Panigale a better ride than earlier models, so although power is up overall, it’s in the mid-range where the improvements to power delivery are most noticeable. It’s an angry motor, especially when you choose Race mode, with snappy power delivery and a quick response to any rider input – which is just how a high-end Superbike should be. 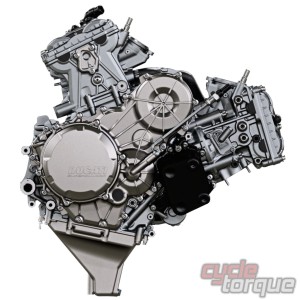 It feels like the lumpy-cammed race bike it’s derived from. Ducati claims the desmo valve actuation system – which mechanically opens and close the valves, rather then using valve springs – means more aggressive cam profiles can be used. This gives the aggressive feel to the motor which Ducati has tamed in the Multistradas with variable valve timing – but we don’t want that exciting, adrenalin-pumping feel taken away from Ducati’s sportsbikes.

Modern technology means you can tame the beast a bit by selecting sport or wet modes though, which tone down the throttle response somewhat, making it that bit more relaxed and easy to ride in traffic and at road-legal speeds.

To increase the capacity Ducati engineers designed and built longer con-rods, increasing the stroke from 57.2mm to 60.8mm. With an unchanged bore of 100mm, it’s still a massively oversquare engine, and still revs to five figures in a heartbeat.

There’s modern technology in the build, too, with vacuum die-cast consistent thickness engine cases to be light and strong. The large valves are actuated through a racing-derived rocker arm system and are coated with a Diamond-Like Coating for reduced friction and increased fatigue strength. The piston pins and crown also have DLC.

Feeding the engine are two throttle bodies per cylinder inside oval throttle bodies with an effective diameter of 62mm. The throttle bodies are positioned above and below the butterfly and are controlled independently by the Ride-By-Wire electronic throttle.

Power is pushed through a servo-assisted slipper clutch. Derived from the 1299’s, the clutch features a progressive self-servo mechanism which compresses the friction plates when under drive, producing a lighter feel at the lever. The same mechanism reduces friction when the slipper-clutch action is required during aggressive downshifting, so it is less prone to lock charging into turns.

Assisting the slipper clutch into turns is the Engine Braking Control (EBC). By monitoring the forces acting on the rear wheel as well as throttle position, gear and crankshaft deceleration, the EBC uses the injection system to manage the amount of engine braking provided – and the ride can choose between three settings.

Ducati’s Quick Shift comprises a microswitch in the linkage which sends a signal to the ECU during upshifts which cuts fuel to the injection system, producing seamless gear changes. The system can be switched off, but I’m buggered if I know why you’d want to – maybe if you’re stuck in your ways and want to commute on a 959?

We’ve used the Ducati eight-level traction control on many of the company’s sportsbikes and remain impressed with the system, as we are with the three-level ABS.

There are three riding modes – Race, Sport and Wet. Race is, of course, the most aggressive in terms of engine responsiveness, however it also set the traction control to a low degree of intrusiveness, sets the ABS to front only and sets the engine braking to sport-oriented.

Sport mode is simply tamer across most of the electronics. It still provides the full 157hp, but with a tamer throttle response. ABS operates on both wheels.

In wet mode the throttle response is even tamer again and output is reduced to 100hp. Maximum levels of traction control and the ABS is set to maximum. Although it’s called wet, it’s really also a good road mode, especially in traffic, offering the greatest protection from mistakes – either by the rider or another road user.

To reduce costs, the 959 Panigale doesn’t get the TFT colour instruments of the 1299, having to make do with black on white LCD. Comprehensive in the information it provides, the instrument panel is also there to show you information when changing modes or the customisable electronics.

An option for the instruments is the Ducati Data Analyser+ with GPS function (DDA+ GPS). This unit evaluates the performance of the bike and rider. It uses GPS to record laptimes, throttle openings, speed, engine speed, gear and traction control usage.

The 959’s aluminium monocoque chassis is changed from the 899’s. The swingarm pivot is lower and the wheelbase longer while the rake and trail stay the same, so the steering is slightly slower. Weight bias is 51/49 front/rear.

Ducati can’t provide the less-expensive superbike model in its range with all the best gear, but this model does get Showa’s Big Piston Forks, a modern development hailed as the latest and greatest by some manufacturers. There’s also an adjustable steering damper standard.

At the rear is an offset Sachs shock acting on the twin-sided swingarm.

Brakes are by Brembo, but again, they aren’t the top-of-the-line units, but rather the M4.32 monobloc calipers acting on 320mm discs at the front and 245mm rear. 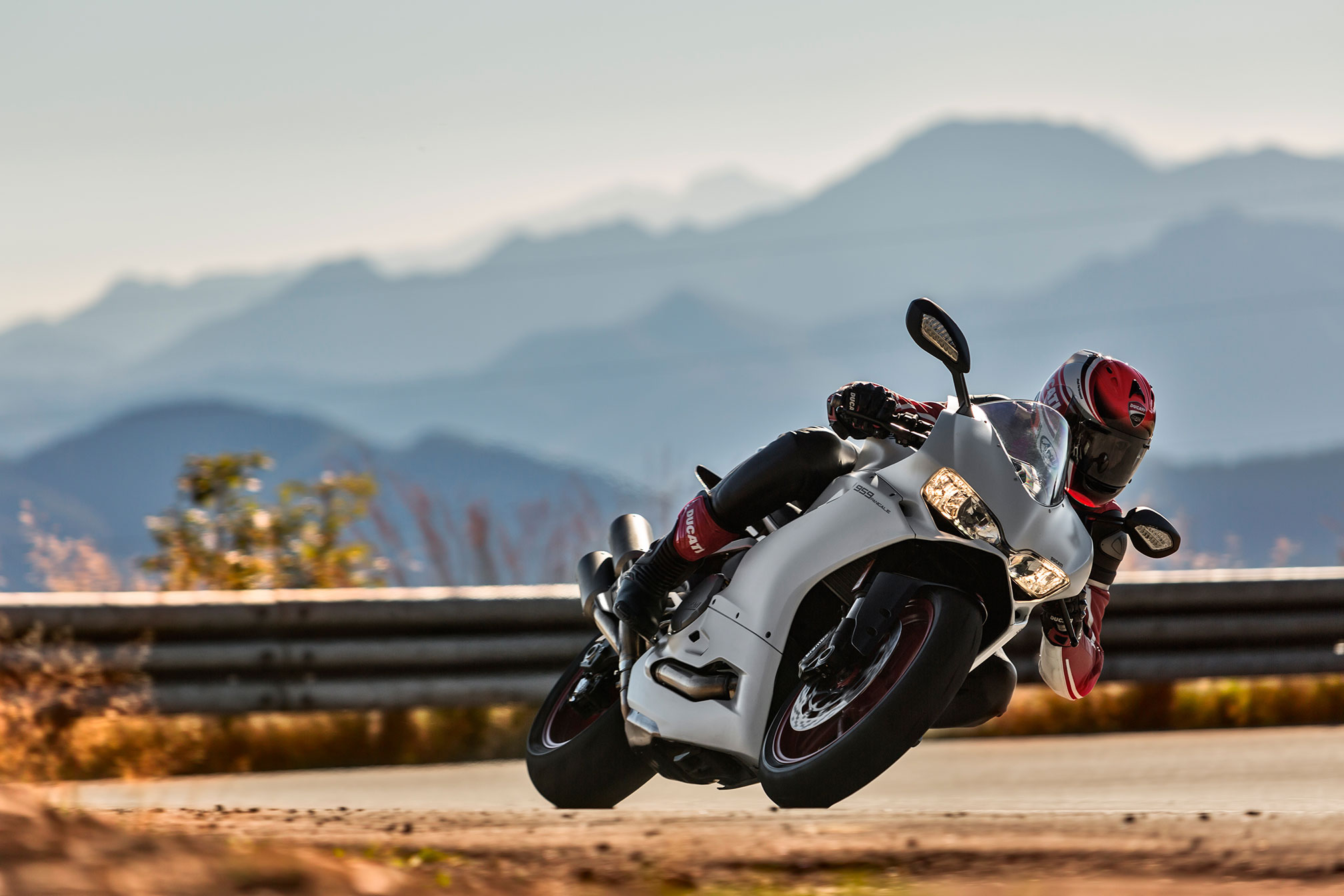 Before throwing a leg over a Panigale, you should have a long, hard look. Is there a more purposeful-looking machine? It’s doing 100mph on the sidestand. The sculptured bodywork is incredibly sexy and the style of the machine begs to be tamed.

The riding position is racer crouch. It was just what I expected, nothing more, nothing less. If you complain of comfort on the Panigale, you’re riding the wrong bike. The suspension is firm out of the crate and you’ll chase your tail trying to set it up for rough Australian roads – but on smoother surfaces it is an absolute weapon.

Fire up the L-Twin and you are rewarded with a thumping sports engine at low revs, a howler with the taps open. This isn’t a bike for straight line blasts – buy a Diavel for that – but for the twists and turns which give meaning to a sportsbike rider’s life.

The 959 Panigale loves those corners. It handles beautifully in slow, medium and fast bends and flicks through esses with a minimum of rider input. Yes, it’s been designed with racetracks in mind and doesn’t like potholed, lumpy or loose surfaces – if you spend real time on roads like those, buy a Multistrada.

The 959 Panigale is about the sport, about going fast on good roads and tracks, and in that environment this is a superb motorcycle.

Despite a small crash in the FP3 session, reigning World Champion Marc Marquez, secured his tenth pole – from twelve this season – for tomorrow’s Great Britain GP, whilst Andrea Dovizioso and Jorge Lorenzo have also qualified on the front row. […]