Tom Sykes (Kawasaki Racing Team) has taken the fifth Tissot Superpole of the season at the Donington Park Circuit with a lap time of 1’27.378. Scoring his 15th career pole position the Huddersfield born rider equals Colin Edwards at sixth all-time for Superpole wins.

Tom Sykes: “I had a small crash yesterday on a damp section of the track but the boys did a really good job and gave me a great Ninja ZX-10R to ride today. We have worked hard on the race set-up here not just in qualifying. There are a number of factors why I can do well in Superpole but I have always enjoyed riding by myself on the best package we have. Combine that with the ‘time-trial’ element of Superpole and I just race myself and the tarmac. The refreshing thing is that the Ninja ZX-10R is working well over race distance. We should have a fairly consistent package for tomorrow’s races. That is the most important thing.” 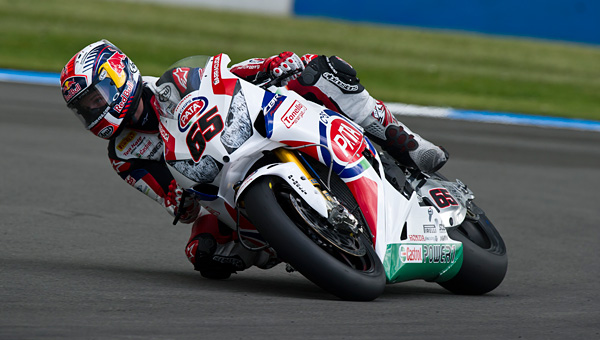 After coming close to elimination in Superpole 2, Pata Honda World Superbike’s Jonathan Rea (above) progressed to an outstanding fourth place, a great result for the Ulsterman on the track that saw him winning the latest WSBK race held on the Leicester circuit.

Encouraging performance for Leon Camier (FIXI Crescent Suzuki) who was fifth at the chequered flag to precede works BMW riders Marco Melandri and Chaz Davies, Davide Giugliano (Althea Racing Aprilia) and Niccolò Canepa. The One Event rider, current Championship leader in the FIM Superstock 1000 Cup, was the only one entry of the Team Ducati Alstare to qualify for Superpole 3, finishing ninth.

Works BMW rider Chaz Davies rode his way up to sixth place in the final stages after an apparently hard time to find the right balance for his BMW S 1000 RR on the Leicester Track. The Welshman was followed by Italy’s Davide Giugliano (Althea Racing Aprilia) and Jonathan Rea (Pata Honda World Superbike). Ulsterman’s team mate Leon Haslam was again on track this morning to secure a top-15 finish and qualified for Superpole with the last slot available.

Spaniard Carlos Checa ended his charge to the front rows in Superpole 2 and will start from 10th place on the grid, while Ayrton Badovini was 14th behind local man Leon Haslam (Pata Honda World Superbike), who was cleared to ride just before Free Practice 1 on Friday morning.

Jonathan Rea: “I guess today was OK and I’m happy enough to be fourth and to be in the top two rows here. We started the weekend a little on and off and sluggish with the settings, and it really didn’t help with Friday morning being wet and the second session not being perfect. So we’ve really only made progress between the two sessions today and I think we haven’t shown our full potential yet. I know I’m struggling a little bit on the bike in some areas and we need to iron that out first but I was quite happy with the lap time we set in Superpole 3 on a race tyre.”

Leon Camier: “I’m a little bit frustrated because the normal strengths that we have are holding me back a bit this weekend. That front-end feeling on turning-in and then braking just isn’t quite there and this is usually a strong point for us, so we need to work on that to get it right tomorrow. Overall everything feels ok and if we can get it that little bit better should be a lot stronger for the races. It’s going to be tough tomorrow, because so many guys are doing similar lap-times and although it will be good to start nearer the front, as I said it will be difficult, so we’ll just have to get involved with the front group and see what happens.”

Marco Melandri: “I’m quite satisfied. Tomorrow I will start from the second row, which is not bad here at Donington. But I need to have a good start in order to keep in contact with the front runners. In Superpole we unfortunately could not use the additional grip that the qualifying tyres offer. It was much better with the race tyres. With them, I constantly improved and did a very good lap time. I am still looking for some more grip on the rear but we have some ideas how to improve.”

Chaz Davies: “We are improving, but not quite enough unfortunately. But it is actually a better grid position than I have had in the last few races. I think we made a good step forward regarding the settings and now I feel like I have a bike which could be reasonably competitive tomorrow. We are getting closer. But yesterday’s rain has hurt us a little bit. It has taken us too long to find the set-up because of the bad weather on Friday – as it already was the case at the last two races. I don’t have experience with the RR on this circuit so we have to just work a little bit more than the guys who are familiar with their bikes here. Anyway, it is all a learning process and we will see what we can put into play tomorrow.”

WORLD SUPERSPORT
Sam Lowes (Yakhnich Motorsport Yamaha) keeps his outstanding momentum up by scoring his ninth career pole position, the third in a row for the current World Supersport Championship leader. The local rider rode to an amazing new Best Lap for Donington Park in 1’30.276, improving by 0.6 seconds the time set in this morning’s Free Practice 2.

Kenan Sofuoglu (Mahi Racing Team India) closed the gap to the front by lapping under the 1’31 seconds, to further improve his already competitive time. The Turkish rider will start from second place on the grid ahead of One Event rider and current British Supersport Champion Glen Richards (Smiths Triumph Team), who had a spectacular collision in the closing stages with rookie Alex Schacht (Racing Team Toth Honda) with both riders able to walk away uninjured. Encouraging fourth for Frenchman Florian Marino (Intermoto Ponyexpres Kawasaki), substitute for injured David Salom, who kept himself with the front runners after a really positive performance in the previous round.

Loris Baz (Kawasaki Racing Team) will start both of tomorrow’s 21-lap races from pole position after securing the first Tissot-Superpole of his career today at Assen, courtesy of his 1’34.357 lap time (a new outright best lap of the circuit) set moments before the arrival of the rain. […]