Tom Sykes (Kawasaki Racing Team), pictured above, took out Race 1 at Mazda Raceway Laguna Seca with Eugene Laverty (Aprilia Racing Team) winning the second race, setting the scene for what should be a thrilling finish to the World Superbike season.

After today’s results, Sykes is still the Championship leader with a 23 point advantage over Laverty who has jumped to second position in the overall standings. Sylvain Guintoli (Aprilia Racing Team) is now third, a point behind his team-mate while Marco Melandri (BMW Motorrad Goldbet) is now 42 points short from the lead.

Race 1
Race 1 at Mazda Raceway Laguna Seca, was eventually contested over 12 laps, rather than the scheduled 26 due to two red flags, caused by the crashes sustained firstly by Danny Eslick (Michael Jordan Motorsports Suzuki) and then by his team-mate Roger Hayden.

Sykes took the lead on the tenth lap thanks to an outstanding overtaking manoeuvre at Turn 11, after a side-by-side downhill ride with Chaz Davies (BMW Motorrad GoldBet). The Championship leader then rode comfortably to win the race, while Marco Melandri lost some ground after trying to pass his team mate Davies at Turn 5 and then, on the final lap, lost third place courtesy of a superb pass by Eugene Laverty (Aprilia Racing Team) at the “Corkscrew”.

Guintoli ended up fifth, a frustrating result for the Frenchman who was comfortably in the lead in each of the two interrupted races. Davide Giugliano (Althea Racing Aprilia) claimed sixth place, ahead of Jules Cluzel (FIXI Crescent Suzuki), Toni Elias (Red Devils Aprilia), and Ayrton Badovini (Team Ducati Alstare). 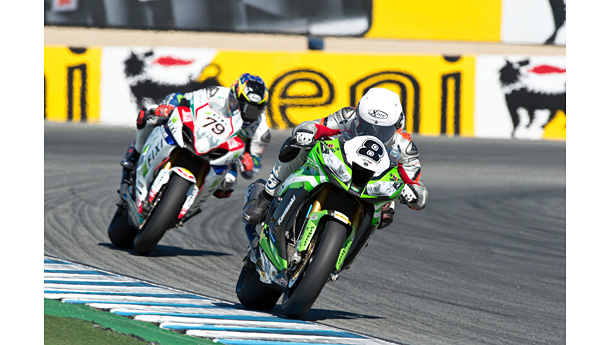 Race 2
Eugene Laverty won the second race in spectacular fashion. After passing Giugliano (Althea Racing Team) at Turn 5 with 3 laps to go, the Irishman made the exact same move on Sykes on the following lap, breaking the spell that was holding the Brit at the front for most of the race.

Eugene Laverty: “It was not an easy race. I’d like to thank my team because they made some set-up adjustments to my bike that worked perfectly. I pushed to the limit on the last lap, Davide (Giugliano) and Tom (Sykes) were really strong but I’m happy for the win. It was an unexpected result, but now I’m now second in the standings ahead of two very different rounds. I would like to dedicate this win to my track engineer Marco Bertolatti, who has just become father.”

Sykes, on the other hand, tried everything he could to defend his position under braking, but once he lost the lead he was passed by both Giugliano and Melandri, crossing the line in fourth place. The works BMW rider successfully stayed ahead of the Championship leader for third, while Giugliano did the best he could to snatch his first WSBK race win, eventually settling for second.

Marco Melandri: “Today was a quite positive day. It was not easy, even if I got the best result I could achieve. I want to thank my team; they did a very good job. Unfortunately during the first part of the races I struggled with the front, so I needed a long race to catch up with the guys in front of me. This was not possible yesterday as the race was not long enough. But today, I could push in the second half of the race and I got on the podium. There are still many points still available. It will not be easy, but I still want to win some more races.”

Tom Sykes: “It was great to win yesterday and I led for a long time today but that was the first time we have struggled with grip all weekend. We were six or seven tenths off our best times in the same track conditions and we have to think about why that was. We know what our potential was here again today. Overall, we have extended our championship lead but it would have been nice to taken that second podium! We can keep improving and we have a couple of good circuits coming up so we will move on with confidence. In less than a week’s time we will be in France and doing it all over again. We have worked hard and well all race weekend and took a win on Saturday.”

Sylvain Guintoli did not manage to catch the leading pack to be in contention for the win, but the end result today helped him stay in touch with Sykes in the standings, as he ended up fifth ahead of fellow Frenchman Jules Cluzel (FIXI Crescent Suzuki), Toni Elias (Red Devils Aprilia), wildcard Roger Hayden (Michael Jordan Motorsports Suzuki) and David Salom (Kawasaki Racing Team).

A disappointing race for Team Ducati Alstare, as both Niccolò Canepa, who running fourth, and team-mate Ayrton Badovini suffered crashes, while Welshman Chaz Davies (BMW Motorrad GoldBet) had to pull in due to a technical problem on the second lap.

Chaz Davies: “It was very frustrating because the race looked like fun and for sure I would have been in the mix. The bike felt great so I think I would have certainly done my best and tried to win today. I think we would have had a good chance. With the bike, we had definitely made a step forward from yesterday but unfortunately we did not get to showcase it because we had an issue with the front brake system. After my crash in the warm-up, when I lost the front, we had to replace the brake system.

“During the sighting lap it felt like there is something not quite right with it, but on the warm-up lap and after the start it was fine. But then on the second or third lap, the issue came back. I basically had zero brakes and it was getting too dangerous so it was safer to stop. The guys will now check what caused the problem. Now we are heading to Magny-Cours, where my target is to again fight for wins and podiums.”

Kawasaki didn’t build the balls-to-the-wall Z650L I expected. It built a better one… […]