SUZUKI describes the styling as “brash” and that’s probably not too far off the mark.
There is certainly an angularity in its look that is reminiscent of Suzuki’s big B-King cruiser and if you’re a child-learner from the ’70s like me you might even get a sniff of Katana if you look really, really fast and shut your eyes. 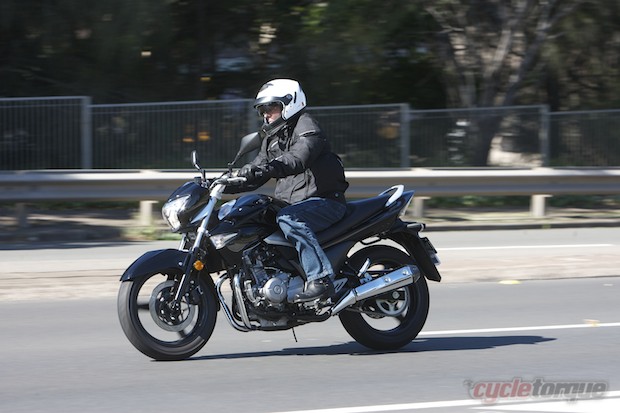 But I do like the look of it. And I definitely do like the symmetry of chrome header pipes and an exhaust on either side.
It does seem to integrate very well with the “brash” bodywork. But first things first. Technically it’s a GW250 and Inazuma is the Japanese word for lightning and I do believe they are referring more to styling cues than actual speed and/or destruction.

The monicker was also used on a couple of models more than a decade or so ago. The four stroke, liquid-cooled SOHC twin produces about 24hp (18kW) which is perfectly reasonable for its size, and design brief, but it’s pushing 183kg around. On the plus side it’s a very stable bike and if you get caught needing to negotiate a small stretch of gravel it will feel nicely planted and handle it easily.
Not that you’d go looking for that kind of route on this kind of bike but it’s nice to know you have that stability. 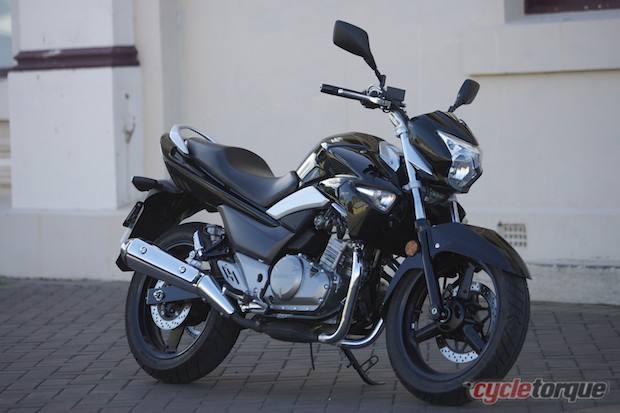 We did our share of city commuter traffic and local industrial zones and the Inazuma proved to be easily manageable in tight conditions.
The handlebars are a comfortable reach for the average rider and the bike generally has good ergos from the perspective of ’peg, seat to ’bar placement. Instrumentation is very good with a mix of analogue, being the large easy to read tacho, and digital which covers twin trip meters, clock, fuel and even a gear position indicator – nice. 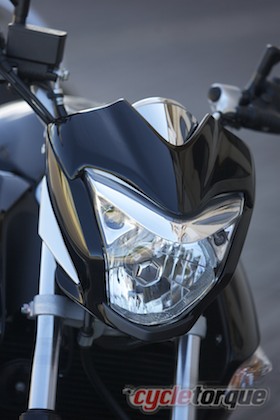 A couple of extras include the maintenance interval indicator and three-mode rpm indicators. The six-speed transmission handles city or the highway with equal aplomb. With an 11,500rpm redline she likes a bit of a rev up and you know that 110kmh plus is not going to be a problem on more open highways or out in the country when you get a bit more adventurous.
It’s actually a very sweet little engine; it revs freely and the gearing means it never feels like it’s struggling.

Suspension is handled by a KYB mono-shock with seven-way adjustable pre-load on the rear and the front are conventional 37mm KYB telescopic. The seat is nice and roomy for riders of most physiques and with a seat height of 780mm is suitably low even if you’re a bit height challenged. There are actually smaller capacity bikes out there with taller seats. It is a fairly firm seat without being actually uncomfortable, but then it’s not the kind of bike you’re going to be riding for hours on end – you’d be selecting a V-Strom or Boulevard for that kind of thing, surely! 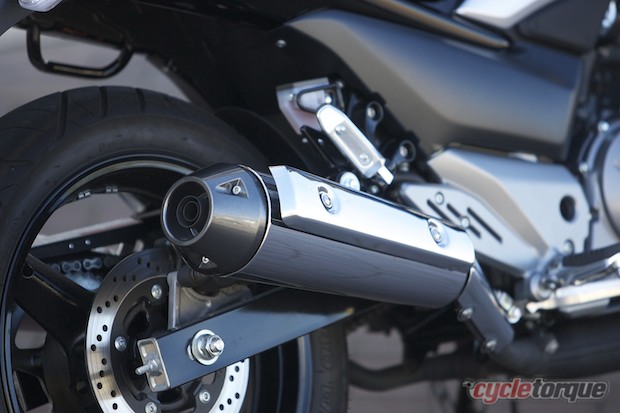 The pillion gets a silver grab rail to hang onto which is a handy thing to have. The brakes are quite good, especially the front which is a Nissin twin piston caliper 290mm disc and rear is Nissin single-piston caliper 240mm disc. The 13.3 litre fuel should be more than adequate for most people’s needs. 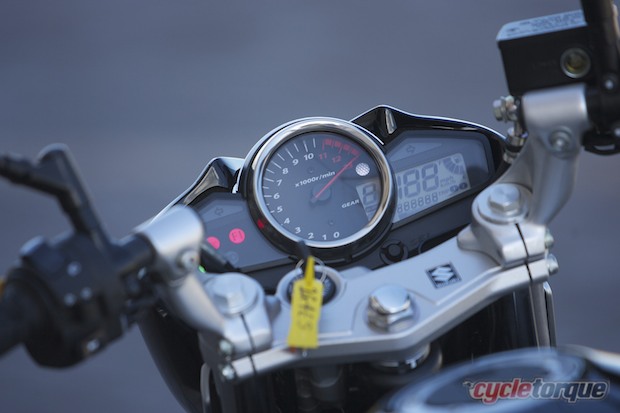 Suzuki also has a fairly decent list of goodies that you can add to your Inazuma to add your own touch of style.
You can get a centrestand as an optional extra, as are crash bars, rear rack and 26-litre top box and four or 22-litre tank bags.
So you could use your little sports/commuter to stretch your envelope a bit and explore a little further afield.
There are lots of other little goodies you can get as well including things like a carbon tank pad, crankshaft hole plug, valve cap set and lots of other little bits ‘n’ bobs, which amount to bling really.

Of course your Inazuma will come with two year unlimited kilometre warranty. For just $4990 plus on-road costs you get a lot of quality machinery for your money. The Inazuma is not what you’d call a sports LAMS bike but not everyone wants that style. Definitely put this one on your list if you’re shopping around for a LAMS bike.

The third round of the 2014 eni FIM Superbike World Championship, which saw an overall attendance of 52,252 spectators, reached its climax today with the two races held in completely different weather conditions at the Assen TT circuit. […]

Byrne wins after last lap move on Brookes at Thruxton

Kawasaki’s Shane Byrne (above) has equalled the all-time record of 43 race wins in the MCE Insurance British Superbike Championship after a committed last lap move on Josh Brookes to take the lead on the final corner of the last lap. […]