In September this year I wrote an op/ed about the Phillip Island circuit and how it is renowned for tossing up some of the world’s greatest motorcycle racing. 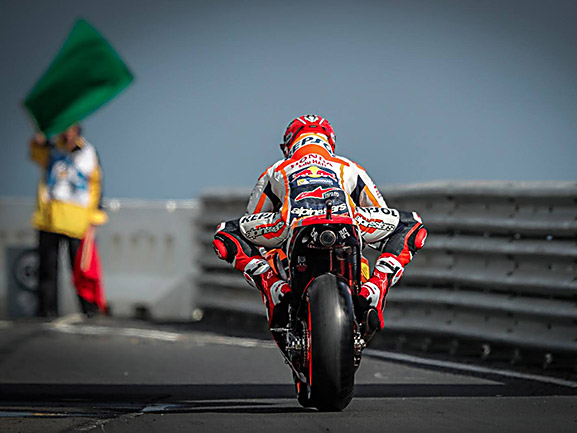 There were five riders vying for a MotoGP title in August and it appeared as if each race would become more and more critical.

Since then Valentino Rossi broke his leg, Marc Márquez won two races, and the other three have had mixed results.

In the last round at Motegi, Japan, Andrea Dovizioso (233) took five points back from Márquez (244), in one of the best wet battles in recent memory. Rossi crashed out

As the Championship arrives at Phillip island we are effectively down to three contenders, with Maverick Viñales (203) considered a mathematical chance.

Phillip Island over the years

If you look at the last 10 years, the Australian Motorcycle Grand Prix at Phillip Island has continually been the harbinger of significant Championship moments.

With a maximum of 75 points left up for grabs by the time the Continental Circus comes to Australia, someone’s desperate to take a risk…

The race in some ways didn’t meet my expectations but in many others it well and truly exceeded them. It was spectacular. I’m almost lost for words.

How will we talk about that race in the future? I’m not sure. But I know we will.

For the moment however, here is a list of five things we have to discuss:

Jack Miller – he took off like a cut cat and diced with the front-runners for most of the race. He said in the post-race interview with Fox Sports that he ran out of rear tyre with half a lap remaining.

Jack ultimately finished seventh and made a proud showing in front of his home crowd.

Marc Márquez – amazing to watch! Unbelievable to think that he was an active participant in the ding dong battle amongst seven or eight riders, yet he was the one riding the most conservatively! Márquez took scalps at Southern Loop (Turn 2) like it was no one’s business and shut the gate with a few laps remaining, ultimately winning by almost two seconds from Rossi and Vińales.

Was it one of the most-remarkable MotoGP race wins we’ve seen from him? It’s got to be up there and I’d like you to name one better…

Andrea Dovizioso – poor qualifying, the wrong tyre choice and a run-off at Turn 1 on Lap 2 was anticlimactic from a Championship perspective, all-but sealing Dovi’s hopes.

He had similar race pace as the front-runners for most of the race, but things went from bad to worse as the likeable Italian made his way through the pack to contend with Dani Pedrosa for the majority of the race. Pedrosa is battle-hardened and being Márquez’s teammate didn’t help Dovizioso. Pedrosa and Dovi swapped positions a few times, with Dovizioso appearing to run out of rubber by Lap 19. On the last lap Pedrosa got a better run out of Turns 11 and 12 along with a draft to the line from Scott Redding. Both ultimately overtook Dovi out of the last corner.

Rubbing is racing – five-and-a-half seconds separated the top-seven riders, and each of them would have undoubtedly had skid marks on (and in) their leathers.

The racing was the fiercest I’ve seen in recent memory, but it was hard to say any one rider took it too far.

Each could say they gave as good as they got. The last few laps between Johann Zarco and Andrea Iannone were especially frantic. Neither backed down an inch!

That brings us to the track itself – are there two better corners to see overtaking on the Grand Prix circuit than Honda (Turn 4) and MG (Turn 10)? Watching the likes of Vińales, Zarco, Rossi, Iannone, Márquez, Miller and Cal Crutchlow line up their moves through the extremely fast sections preceding the braking areas of these two corners was edge of the seat stuff.

Not only that, because the battle was amongst so many, getting dive-bombed at Honda and MG often meant two and three riders could also force their way through!

As it stands, Márquez looks certain to take his fourth MotoGP crown.

For Dovizioso to win his first, he needs to take as many points as possible from the next two races at Sepang, Malaysia and Valencia, Spain.

If he does that he’ll also need Márquez to score only 16 points.

CDR Yamaha’s Dean Ferris has continued his dominance of the MX Nationals with another two wins at the Nowra Motorsport complex, July 1-2. […]

The Wildcard: Tom Toparis interview | From Ninja 300 Cup to Moto3 in two years

Tom Toparis is making the most of a once in a lifetime shot which could lead to superstardom. […]