DURING the year you may have seen photos doing the rounds of Ducati making a presence at Surf Lifesaving Ironman and Ironwoman events, especially the podium shots at the end of the day with the prominent Ducati logo. The involvement certainly attracted a lot of interest and saw Ducati travel around Australia to Perth, Newcastle, Portsea, Surfers Paradise, Coolum and Noosa Heads.

The sponsorship with the series also saw the winners of both the mens and womens events to not only win cash prizes, but they would also ride away with a new Ducati Monster 659. Ducati Australia handed over the keys for two red Monster 659 to Kellogg’s Nutri-Grain IronMan Series winner Shannon Eckstein and Telstra IronWoman Series winner Courtney Hancock when they visited Gold Coast Ducati last week.

“It was awesome to receive my Ducati, it was the icing on the cake to top off my win! They are a great brand and produce great looking bikes,” says Shannon

“I’m very excited to win my second Telstra Ironwoman Series, after snapping my board in half at the Surfers Paradise round my Series wasn’t looking great, but I found that inner strength and was able to finish on top, not only with the crown but also a new Ducati! So many people have told me how thrilled they are to have Ducati as a Series sponsor. Thank you Ducati for such a great prize!” exclaimed Courtney. 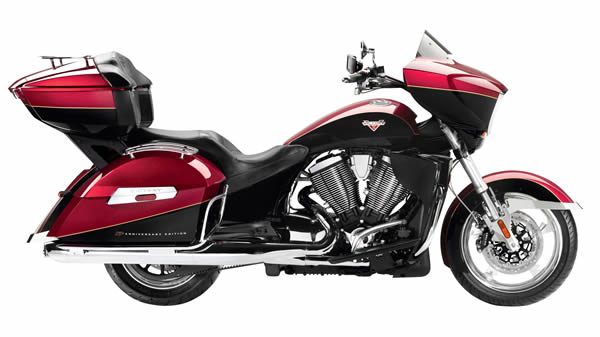 VICTORY Motorcycles is celebrating turning 15 by releasing the 15th Anniversary Cross Country Tour Limited Edition. This bike has it all, shod with custom Billet wheels, GPS, a massive 155 litres of storage and loads of chrome. Even the stereo is upgraded with Kicker premium speakers and an iPhone / iPod cable to connect your favourite tunes.

The exclusive look is finished with custom cut and stitched seats and a 15th Anniversary stitched backrest. The red and black paint with gold pinstriping replicates the first Victory motorcycle to roll off the assembly line on July 4, 1998. There will only be 150 of these 15th Anniversary Cross Country Tour Limited Editions produced worldwide – Australia will be allocated just four.

There is even a 15th Anniversary numbered badge fitted to the dash.
The bikes arrive in dealerships in June, be quick to register your interest if you are a Victory fan.

IN A bid to inject interest back into local road racing, a group known as Australian Road and Track Rider Promotions have released more details about their bold day/night race to be run on November 16. Up for grabs is $100,000 with the winner taking all – the catch is you have to race in at least two of the FX Superbike rounds.
This requirement has been reduced from the previously stated three rounds, as some competitors ran into trouble with ASBK date clashes.

Any graded domestic rider can enter and there will be spots left open for competitors who don’t live on the East coast of Australia. This means International (Kiwi in particular) and West coast racers can get an entry in.
The race will be televised as an added incentive for prospective sponsors. The tyre rule has been relaxed to allow teams to run either treaded or slick tyres – as long as they are homologated by the ARTRP.
This is already shaping up as the next big thing in domestic racing and entry forms are available now.

Honda releases XR125L for the farm 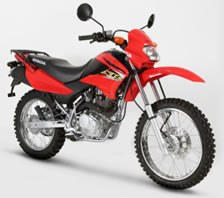 FARMERS get another option in the ag bike range from May with Honda offering the XR125L as a low budget alternative. The bike is powered by a single cylinder 125cc engine with a five speed gearbox and twelve litre fuel tank.
Honda says the XR125L will have ‘excellent hill climbing torque’ and is ideal for ‘following slow moving cattle or transporting essential equipment around the farm’.

Long travel suspension and a low seat height will add to the ‘ag’ credentials, as well as having an electric and kick start fitted. Honda are pitching this bike as ‘fuel effiicient, hard working and dependable’, not to mention cheap.
The bike will be available for $2,990 plus deal charges. 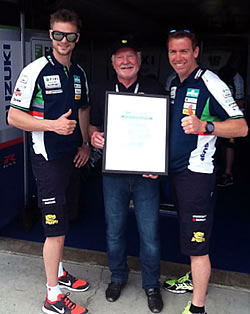 THREE years after becoming the first motorcycle apparel manufacturer to have jeans approved to a Level 1 CE approval, the family owned Australian business has now been awarded Level 2 CE approval for their new ‘Holeshot’ range of jeans. CEO of Draggin’ and regular track day rider Grant Mackintosh explains that Level 2 approval means that Draggin’s protective lining now lasts more than seven seconds in the case of contact with tarmac, making it very likely they will outlast most leathers.

“The true meaning of achieving full CE Approval at Level 2, the highest possible motorcycle standard, is that our customers can have utter confidence in Draggin products,” he said.

To gain CE Approval, Draggin products have to be tested by independent body SATRA Technology Centre which operates out of Northamptonshire, in the United Kingdom, who are ultimately responsible for granting Draggin Jeans’ CE Approval.
Draggin have been sending products to the labs for over 8 years, with the objective of having the world’s best safety products.

THE Myrtleford Apline Rally will be held on the 21st of September this year and entries are now being taken.
The Myrtleford Alpine Rally has been set up as a charity ride and takes in scenery from the Merriang Plantation then entering through the Buffalo River Region.
There will be two loops of fully marked tracks. The morning loop covers approximately 70km consisting of fire trails, ridge riding and some more challenging open flowing tracks.

The afternoon loop is around 60km and will be more flowing trails leading to an optional tight single track which will prove to be fun and challenging. All trails will be made to suit the intermediate rider with some harder sections if you wish.
The ride is open to the first 200 entrants who must hold a current motorcycle license and have a registered bike. Recreational registration is acceptable. The course will have Marshall Points and have ample sweep riders available.
Cost is $120 per rider.

Of trout, Ducati and Thunder

Where else in the world can you go to enjoy trout, Ducatis, nice scenery and the company of like minded motorcyclists? […]