Well, all riding today was cancelled due to high winds up on the mountain. A helicopter even crashed in the winds yesterday, just after it dropped some people off at Creg Ny Baa. If the medical choppers can’t fly there’s no racing. There’s also no spare beds in Nobles Hospital due to a number of private crashes around the place. I heard there’s been something like seven fatalities involving race fans and their bikes. Some of them ride like bloody nutters. That might sound funny coming from a TT racer but at least you can be reasonably sure no one’s going to pull out of a side street. I’m glad they postponed the race as when it’s windy on the mountain it’s very dangerous.

So we sat around all day and went out for dinner down the prom. Superbike TT is on at 2pm tomorrow. I’m ready.

I was pumped for the Superbike TT but to be honest I haven’t felt that comfortable on the bike. It is not easy to ride, it’s a real animal and a handful around here. This bike has had the electronic suspension taken out of it and replaced, internally at least with Ktec stuff. Is it better? I don’t know, I haven’t ridden it with electronic suspension front and rear but I did ride the 2014 HP4 with full electronic suspension and it was harder to ride than the 2015 model. Asking the riders here who have BMW experience they say the 2014 was ‘flightier’ than this years’. The thing is, I bet no BMW tester, or tester of any brand for that matter has ridden it like we do here on the Isle of Man. It is a torture test of man and machine. 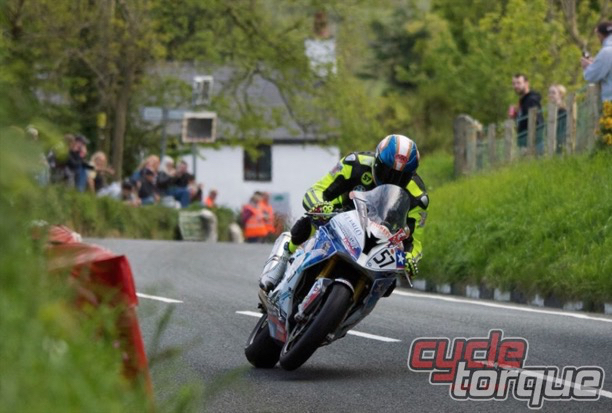 But I never really got to test that out today. As I was coming up the mountain on my first lap I went to remove a tear-off and my whole visor came off. We did have a pit stop practice earlier so it must not have been put back on properly. I did my best to ride the last third of the lap with no visor and still did a 118mph lap but when I pulled in to get a new visor the pit lane scrutineer saw water coming out of the bike, so that was my race run.

We put water in the radiator after the race and ran it up to temperature because we suspected a hole in the radiator but could not find anything. We can only think the radiator cap was not on properly. It’s now been lock wired.

I can only think what might have been. I had passed a couple of riders on my first lap, and to be honest I don’t have the machinery or the experience to challenge the top riders, I know that, but I could well have been in with a top 30 finish.

No racing for me today, but I did get one lap of practice in to test the bike’s radiator. I went out with team boss Paul Shoesmith and we had a blast, cruising around for a 116mph lap, having to slow down heaps of times for yellow flags. It’s the best I’ve felt on the bike and it ran well. The handling is still not ideal, and the bike is still a handful but it does have close to 200hp at the back wheel. It’s hard to explain, but when you are doing 250km/h on the back wheel with the rear end squatting and the front shaking like an idiot, well, it does get your attention.

Superstock race day. I was starting 58th on the road and ready to go. I was able to get past the Yamaha in front of me and felt good on the first lap but on the second lap the bike started playing up again, cutting in and out. It was like it was changing maps on the fly, going from Rain to Slick Mode by itself. One second it would be fine, the next an animal. Was this something from my crash at Jurby, some issue we hadn’t picked up? I don’t know, but the end result was I crashed at the Black Hut up on the mountain, at over 200km/h apparently.

I can’t remember it all but I do remember I was ‘nursing’ the bike back to the pits and had slowed down, letting the bikes I had passed back past me. My mate Dominic Herbertson from Newcastle in the UK had caught me and this was unusual as he started three or four bikes behind me. He saw my crash, saying it looked like I was looking down at the bike and entered the corner too early, running out of road on the exit, glancing off the wall. I then fell off and the bike and I slid 100 metres or so. According to people at the scene I was knocked out for a time and complaining of a sore left leg. I got the chopper ride no-one really wants, back to Nobles Hospital, where I got the usual X-rays, scans and so on. I was looked after by Connor Cummins’ sister. I guess she’d be used to all this TT racer crashing stuff. I can’t remember the chopper ride though, or anything about the accident. I had a beat up hand from hitting the wall I suspect and a sore ankle but nothing broken. I guess my riding gear did their job, lucky I was wearing top quality stuff.

Dad said there was only three litres of fuel left in the bike, so I wouldn’t have made it back to the pits anyway. We don’t know if it fell out in the crash, although the tank was undamaged or if the fuelling was playing up. Was the bike cutting in and out because there was stuff all fuel left in it? It was definitely full with 24 litres in it at the start of the race so these are all questions we don’t really have answers to at this stage. Although I haven’t seen it as yet, by all accounts the bike is not badly damaged, with my right hand and forearm taking the brunt of the hit with the wall. The bike then slid down on it’s left hand side, with crash protectors doing a good job of saving damage. The front wheel was smashed but the forks not bent. Figure that out! Not bad considering I was still no doubt cranking along at a good pace.

Spent last night and most of today in hospital because I was knocked out in the crash. I’m all bandaged up and wearing a moon boot of a sort to keep my ankle stable.

Off to the presentation tonight even though I’m not getting anything. I just want to support the team.

Had a blast last night, wobbling around the Monster Energy VIP party. Spent some time in The Prodigy’s Keith Flint’s VIP room. Couldn’t drink though, was on ‘pop as they call it here. We call it soft drink. Had a blast though with friends, most of whom were well past the ‘wobbly boot’ stage. Dan was out of control, on the grog and dancing like Stevie Wonder.

Spent the day with friends doing some sightseeing. Went to some great places I’d never seen before and had a few coffees and sweets too. Tried to go on the mountain to see where I crashed but the road always seems shut due to crashes. At one stage it was open for only nine minutes before another member of the public crashed. Bloody hell, some ride like idiots and people don’t use their mirrors to see the idiots coming.

Senior race day. I went to the K Tree to watch but spent most of the day chilling out on the grass with friends. The race was red flagged on the first lap when Jamie Hamilton crashed heavily at the 11th Milestone, a very fast part of the course. He’s not well by all accounts and has been flown to mainland UK.

John McGuinnes won the race and really did not ever look like being beaten. He was noticeably the fastest through the K Tree section. He just wanted it more than the rest. My fellow Aussies and mates Dave Johnson and Cam Donald had mixed results. Cam retired and I heard he hit a seagull, then his rear sprocket sheared, causing the retirement. The seagulls here are about twice the size as the ones at home. Davo got ninth in the Senior, and did a 131mph lap, making him the fastest Aussie TT rider ever. It couldn’t happen to a nicer bloke too.

The rest of my time here has been spent packing up, seeing off the Ice Valley team, more sightseeing, catching up friends I’ve made and just getting over the whole TT drama.

Fly out back home today via Dublin.

It’s worth highlighting some other notable results, which in my opinion is what makes the top TT riders special for many reasons.

Many would remember Ian Hutchinson winning five races in one week in 2010. It was all highlighted on the TT3D – Closer to the Edge film. After that ‘Hutchy’ nearly lost his leg in a British championship race, nothing compared to the dangers of the TT. He has endured over 30 operations to save his leg and get movement back. This year he won three races, the Superstock 1000 and two Supersport races. Impressive in my book. 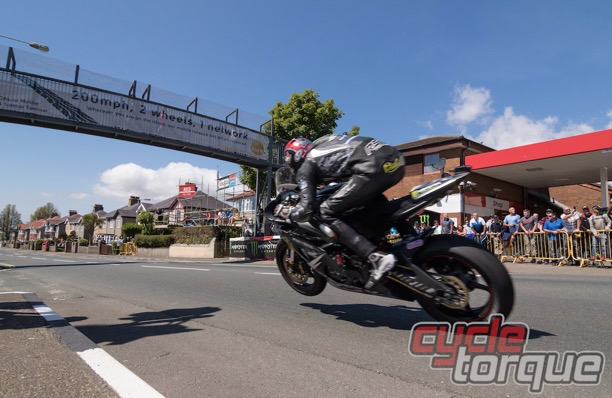 Then there’s the Birchall brothers, Tom and Ben. They had a big crash last year in one of the two sidecar races, and when I saw them in the pits the next day they didn’t look too beaten up. What people didn’t know was that Ben nearly lost a couple of his fingers. 12 months of determination and a good surgeon saw them back and winning the two 2015 TT sidecar races. Also impressive. 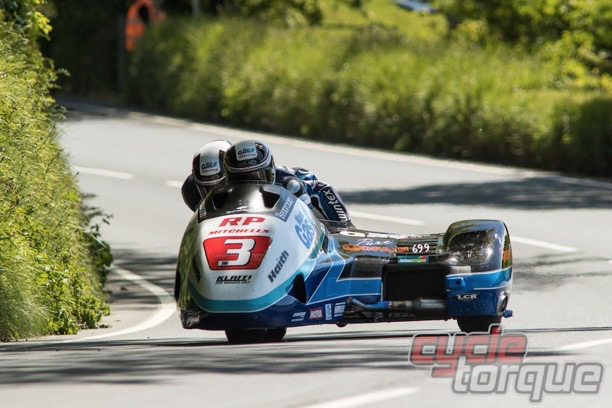 And talking about sidecars, Australia’s own father and son team of Dwight and Noel Beare had another good go at the TT, finishing 17th in race one but DNFing in race two. Fellow down under and ANZAC sidecar racers Daryl Rayner and Richie Lawrance had their best TT together yet, taking a 24th and 19th, and also posting their best ever lap time of over 105mph. Good stuff boys.

Where to from here? Well that’s my TT done and dusted for this year at least. My mum back in Australia was no doubt freaking out and my dad is probably closer to a heart attack. It’s a bit of an emotional roller coaster for all involved really. Some very high profile riders have crashed this year, including Michael and William Dunlop, and also Keith Amor crashed twice. He’s in hospital and far worse off than me. He retired a few years ago due to injury and came back. He’ll probably re-retire after this I guess. I’m disappointed in myself and feel I have let everyone down. Right at this point of time I don’t know what I’m going to do. But I am heading off to the UK to live for a while and most likely do some racing there. Exactly what, I’m not sure. But once again I could not have done it without the help of a small band of friends. To you guys directly, thanks for your support and friendship. It means so much to me. 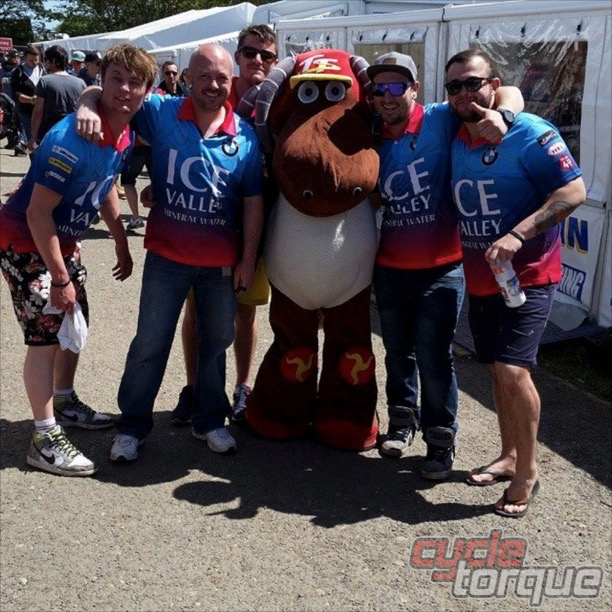 On the cover this November is Alex Pickett riding in the Manx TT – read about Cycle Torque’s exploits racing on the Isle of Man. […]