THE ’70s and ’80s were a wondrous thing for learner motorcyclists in Australia. Now I can’t speak for all states but growing up in NSW if you had a black or ‘full’ car licence you could ride any capacity motorcycle on your learner motorcycle licence. In the town I lived in there were plenty of guys a few years older than me riding Suzuki Katanas, Kwaka Z1Rs and the like with L plates firmly attached to the number plate.

This seemed to be all the rage in my home town, but there were also a few younger guys riding Yamaha RD250LCs and Suzuki GT250X7s, but the gun machine, the one with all the street cred, was definitely the RD. I looked up to those blokes I knew riding the big bore Jap bikes – none of them seemed to be able to afford a Ducati – and only old blokes rode Brit stuff in my town. But being into cars in a big way then, I never got the 250 two stroke thing. When I did get on to two wheels it was on a Yamaha XS250 I cobbled together after buying it disassembled. I gleefully rode it around sans rego and licence for 12 months, as I tended to have the arse out of my pants most of the time. Funny thing is I get up my young bloke for spending all his money now that I am older and perhaps a little wiser, but that’s another plot altogether. Anyway I did try my luck at classic racing with a Suzuki T250 Hustler, which always seemed to break down, as did a string of two-stroke enduro bikes I had at the time. I always liked four-strokes better.

Where is this leading you ask? Well, recently I bought myself a 1986 RZ250 Japanese import and went back to the youth I could have but never did have. It is in quite good nick, having a new paint job and tyres, running well and so on. The first time I rode it I fell in love with it. It had oil injection so no premix needed like my old race bikes. I have to go into a side story here for a second. I knew that little about two strokes when I first raced my T250 at Oran Park some 25 years ago that when I heard what I thought was some rocks rattling around a can I had no idea it was the dreaded detonation, the killer of all things two stroke. I just held the throttle on as hard as I could and hoped for the best. I did punt myself into the wall later that day, putting myself out of commission before the engine did as it were.

So, back to the RZ250. On my maiden voyage as I surged through the gearbox with the engine on song a red light would light up on the tacho. I’d back off and it would go out, and back on as I accelerated again. This happened half a dozen times until I realised it was an 80 km/h Japanese speed warning. Still, I wasn’t sure so I never did crank it right up just in case I found myself flying through the air after it seized. I’d watched plenty of TZ riders get bashed up on recalcitrant machines and I didn’t want to be one, especially on the road.

But what impressed me was how much fun I had on that shortish ride, and how well the bike rode, especially for how lithe it is and a bloke some 25 kilos past his teenage best perched on its back. Parked at the servo near home it grabbed the attention of more than one passer by who knew exactly what it was. When I left for home I just had to let the engine have its head up and over the hill. Ahh, now I understand what the fuss was all about those years ago. 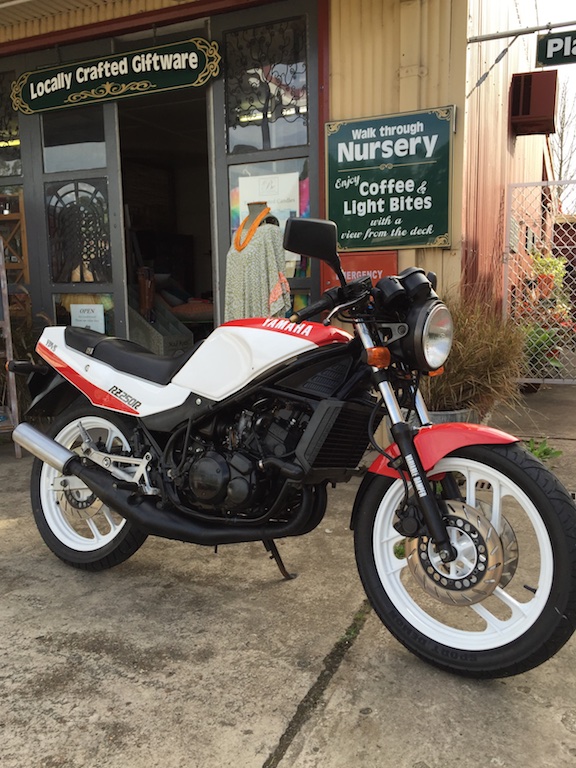 What’s it been like to own so far? Great really, although my ignorance did cause me one issue. It has a vacuum operated fuel tap, which I’ve always disliked in operation to be honest. Good if working properly but bad if not. I didn’t realise it was vacuum operated and after that first ride I turned it to what I thought was the off position. It was actually the Prime position, and so flooded the crankcases with fuel as the needles and seats were past their best. It just refused to start but Brad at B and C Motorcycles in Newcastle quickly figured out the problem. Talking to a motorcycling friend the day after, he told me it was common fare for the mechanics when he worked in a bike shop in the 1970s. “We used to take the pipes off, get rid of the fuel, let it sit for a day, put new plugs in and away they’d go. We’d charge them a day’s labour.” The price of ignorance I guess.

Other than that I love it. My bike is a tad over-geared. At 100km/h in top you have to go down two gears to get it singing again. It just doesn’t have the power to pull the current gearing. That’s easily changed of course. Parts are not too hard to get considering it’s 30 years old. The internet is a wonderful place these days, and Yamaha two-strokes were very popular in the UK and the scene, and parts availability, is big there.

I think my bike is a good one, as the last one I rode on the street was a shit-box. My RZ250 goes, handles and stops way better than I expected when I bought it, considering I bought it on spec without actually riding it.

It’s hard to get a good RZ250 these days, you wonder where they have all gone seeing these sort of bikes were everywhere back in the day. You can find them but good ones for reasonable money are hard to find. If like me you like the classics, the RZ or RD series are fantastic little fun machines. Relive your wasted youth.