AMID the mayhem of modern London traffic there’s an undercurrent of a ’60s subculture where rock‘n‘roll reigned as the anthem to a generation of leather and denim clad bikers with their slick hair and sleek attitudes.

This was a time when cigarettes were the smoking guns of a cool demeanour, but most importantly a time when motorcycling evolved in the streets and the Café Racer was born. This period of freedom and simpler times was the inspiration for the creation of the new Royal Enfield Continental GT Cafe Racer 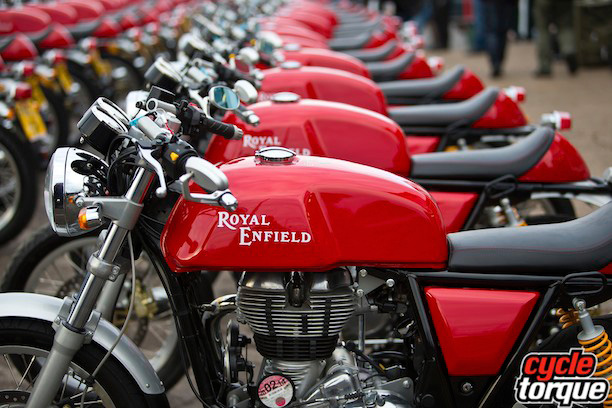 The swinging ’60s A huge amount of research has gone into the design and development of the new Continental GT, not only drawing upon stylistic and classical influences from the café racer era, but also from Royal Enfield’s own 1967 Continental GT itself.

“In a world that is increasingly looking at reviving the mood of romantic and free-spirited optimism of the swinging ’60s’, the Continental GT evokes a sense of nostalgia,” said Siddhartha Lal, managing Director and CEO of Eicher Motors, the parent company of Royal Enfield. 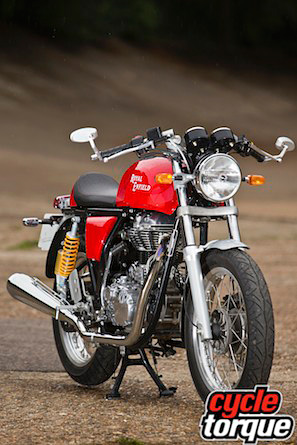 Royal Enfield worked closely with UK companies Harris Performance (chassis) and Xenophya Design (bodywork) to create and refine the new GT, and it appears it wanted to produce a bike that not only had real character, but also found a subtle balance between tradition and technology.

Although Royal Enfield is a motorcycle company with plenty of heritage, it also has a strong vision of its future in the marketplace.

The firm started producing motorcycles in the UK at its Redditch factory in 1901, and is planning to have the capacity to produce 500,000 units per year from its new Oragadam facility in India.

With the Continental GT being the lightest, fastest and most powerful Royal Enfield in production, Royal Enfield proudly invited the world media to put the bike through its paces at the international launch in London UK.

You lookin’ at me?
The stylistic design of the new Continental GT makes it a very enticing motorcycle indeed, it just looks like a fun little bike to ride.

The bodywork has smooth sculptured lines while maintaining the simplicity of the café racer style. The exhaust lays low which gives the 535cc engine room to remind you of its heritage. The steering head/instrumentation area is minimalist in its layout, and the clip-on handlebars help to ensure the bike has a more compact, sporty look.

Oh and by the way, the little bar-end mirrors on the GT, awesome looking and very practical, they would look great on any café style bike. The low profile recessed tank is long and sleek and is finished in Royal Enfield’s ‘Signature Red’. Together with its chrome filler cap and traditional decals it really looks the part.

The side covers are also finished in the same red, but to me they look a bit bare, it would be nice to see some sort of GT insignia here to finish it off. All of this bodywork hangs nicely around the Harris Performance designed chassis, with its double cradle frame, 41mm front forks and twin gas-charged Paioli rear shocks. 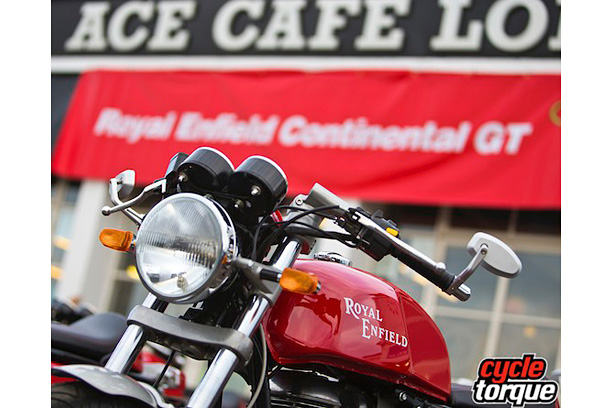 Ready to rock ‘n’ roll
The whole theme of the UK Continental GT Launch was to give the international media (including six larrikin Aussies) a reminder of the rockin’ ’60s in London, the era from which the GT drew its inspiration.
This was actually pretty cool and at times I found myself drifting off and wishing I was old enough to have been part of the whole rock ’n’ roll era.

We enjoyed a guided tour that traced back to the early times of Bill Haley, The Beatles, The Rolling Stones, The Who and The Yardbirds etc and discussed the influence this music had on the culture of motorcycling at the time.

The Ace Café in London was a hive for motorcycle activity back then, so it seemed appropriate the test bikes started their journey from this iconic location.

We arrived at the cafe in the early morning glow and was greeted by a sea of Continental GTs mustered before us in the car park. I had heard a rumour that Royal Enfield had brought 60 GTs to the UK launch, it was pretty impressive to see most of these lined up ready for action. After a hearty English breakfast at the Café, we were all keen to twist the throttle on these little red racers.

The bike’s engines by now were gently rumbling ready for their temporary pilots, and with most of us kitted out in our supplied textile Continental GT Riding Jackets and AGV open faced GT helmets, we were soon aboard the spankin’ new Continental GT machines and ready to roll.

The test ride route was via Brooklands, (the world’s first purpose built raceway which first opened for racing in 1907) for a coffee and onto Brighton (location of the famous Rocker v Mods riot in the ’60s) for lunch on the pier.

This ride promised to give us a variety of roads to showcase the diversity of the GT. Although heading out of London we encountered some traffic, but this was a good chance to get acquainted with the bike and relax into the UK countryside ahead. Instantly the bike felt easy to ride, even with the clip-on handlebars the riding position just felt right, not so low as to give your neck a workout. 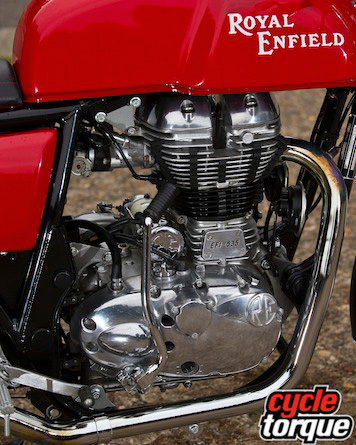 I found the bike easy to just flick around from side to side thanks to the Harris Performance designed chassis. The bike is well balanced, which allows it to feel light and nimble, the 41mm forks are quite responsive and allow the bike to just glide over normal terrain with ease and the Paioli twin gas shocks seem to keep the back end honest.

Even in the full café racer riding position the bike is effortless and comfortable to ride, your knees just mould into the sculptured GT tank, and the ’bars are just right to crouch down for some ‘café cruizin’, without being too low.

The GT motor is based on the Royal Enfield 500cc single cylinder air-cooled UCE (Unit Construction Engine) which has now been increased to 535cc with a re-mapped ECU and RE claims 29.1bhp at 5100rpm.

The power response from a standing start took some getting used to as there was a lag in the juice but once you learnt to give it a hovering twitch it didn’t seem as bad.

The GT engine has a nice gentle purr low down and is deceiving as to how sweet the note is until you are away from the bike to hear it. This was most noticeable when riding as a group into Brighton which produced a sweet harmonious rumble which turned a few heads.

This engine won’t allow you to drop the clutch and wheelie to adrenalin heaven, but remember it’s not the intention of this machine. Instead you get an engine happy to either just purr effortlessly at low revs or be pushed a bit harder and rumble through the rev range to ride comfortably at reasonable speeds for prolonged periods.

The clutch and five-speed constant mesh gearbox seemed smooth and gentle, just a soft nudge and you would change through the gears with ease.

The Brembo 300mm floating disc front brake was solid and reassuring with a good feel, the lever position felt good for me and using a couple of fingers was all that was needed to pull up with ease.
A 240mm disc with a single piston floating caliper covers the rear braking of the GT.

Both brakes when combined with the Pirelli Sport Demon tyres seemed to work well when put under pressure, especially when having to pull up suddenly in amongst the crazy London traffic on a wet road. 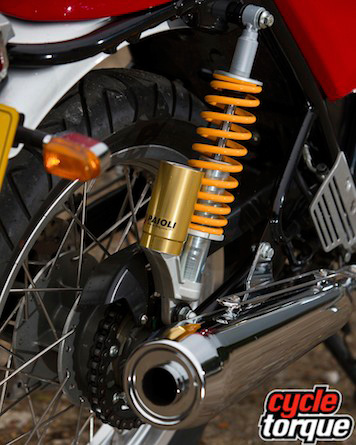 Just ace for Cafes
This bike has huge potential in today’s motorcycle market. You can just ride for the pure enjoyment of riding. It should suit a large variety of riders, and would feel at home in many garages worldwide.

If you want more, well, Royal Enfield in fact encourage owners to trick up their GTs and hint they may even work closely with some modification companies in the future. Sometimes the most unassuming things in life can bring the most joy.

The GT is a bike which doesn’t boast blistering power or top speeds but has an engaging usable power, comfort and agility. This makes it bloody fun to ride and there’s a stylistic mystique to its design that will turn heads at your local caffeine brewing rest stop.

The Continental GT should hit our shores by the end of this year, and it is expected it will sell for around $7000 on road.