WHILE everyone is looking starry eyed at the new Royal Enfield Continental GT it can be easy to overlook the range which has been a stable part of the Royal Enfield dynasty. 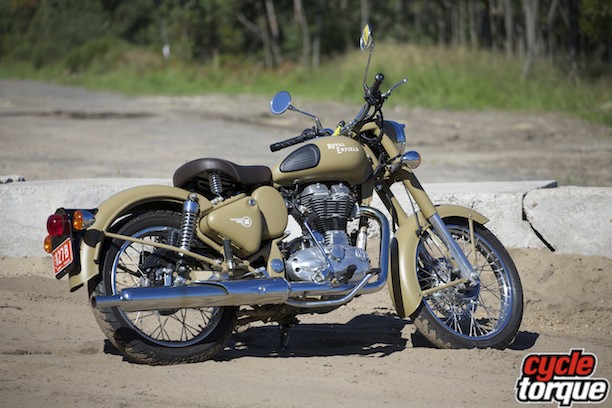 The particular bike on test is called the Desert Storm, but it’s part of the C5 model range which comes in a variety of colours, including one with a chrome/painted tank. I particularly like the look of this bike, and I can imagine someone riding it in the Africa campaign in WW eye eye.

It might look that old but in reality it’s the fuel injected version with electronic ignition even. I’m only joking of course, the Enfields have been like this for some time now, and are very reliable.

What you are buying is an old look, not an unreliable old nail. Most readers would be aware production of Royal Enfield motorcycles went to India decades ago and the company has steadily improved the design over the ensuing years, without losing the quaint style and feel of the British built machines.

This appeals to more riders than you might think, and they are not all old codgers looking to slow down or relive their youth.

The heart of the bike is the 500cc air-cooled single cylinder engine, which has hydraulic lifters and pushrods to actuate the valves. There’s electric start, or kick if you feel up to it, and either way the engine is an easy starter.

There’s a single disc brake on the front and a drum system at the rear, and preload adjustable twin gas shocks and unadjustable telescopic forks handle the road shocks.
On the C5 model you will find a 19 front, 18 inch rear wheel combination which rather suits the look of the bike. 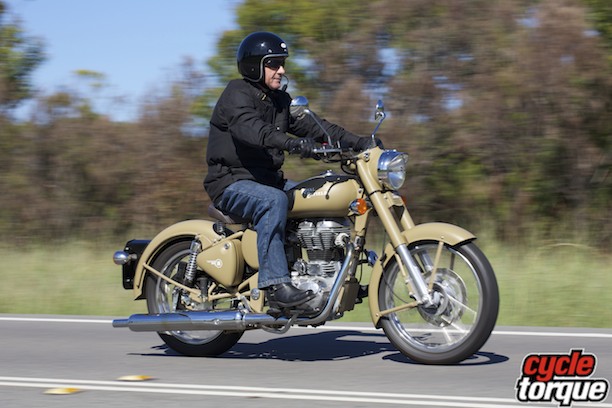 Ready to ride it weighs in around 187 kilograms. Power is around 30 ponies and maximum torque arrives at 4000rpm. It’s an easy bike to ride, and overall gearing is on the low side.

Hunter Valley Royal Enfield dealer B & C Motorcycles (10 main Rd, Boolaroo, Ph. 02 4958 1435) kindly loaned us the bike for evaluation and owner Brad Woodhouse told me he regularly goes one tooth bigger on the countershaft sprocket for customers as this gears up the bike and makes for a more pleasurable open road experience.

This makes perfect sense and the engine seems happier for it anyway, which makes you wonder why the factory doesn’t do it standard.

First gear is isn’t that low really but once you’re in second and above the gears are well spaced, and the engine is punchy off the bottom – well as punchy as an old school 2-valve 500cc single can be.

Don’t expect there to be a raging top end, but it will happily cruise along at a shade over 100 km/h. It will go faster but the riding position and lack of outright horsepower make it hard work for the bike and rider. That’s why going one extra tooth on the front sprocket will benefit you on the open road.

To be fair though, that’s not what the bike is about or what buyers want, and don’t be afraid to take the bike on longer distances, just don’t make most of it freeway work.

It’s a nimble little jigger, and the suspension copes with the bumps better than I expected too. You get a triple whammy with the suspension, as the single seat on the test bike was sprung too.

The brakes are also better than I expected, with the big single unit on the front pulling you up fine, and the rear drum there to help. It certainly wasn’t better than the front brake, which is common on older style bikes.

And it’s happy enough tootling along dirt roads too. I’ve ridden a few REs on the dirt and the narrow tyres and taller wheels make it a pleasurable little jaunt, and the plugging nature of the engine lets you get caught in pretty much any gear without worrying it.

There are bulging side covers on the bike, which can be opened by the ignition key. One hides the air filter and one some of the electrics, like the fuse holder.
I was sort of hoping one would hide a cloth covered tool kit with a gas mask in there as well, just in case I was attacked with mustard gas. No such luck, looks like these fangdangled new REs are reliable.

Overall the Classic 500 EFI is lots of fun to ride, and it just goes to show you don’t need exhilarating acceleration or eye popping retardation to enjoy riding a motorcycle. Sometimes it’s just about the ride, not what you are riding.

Prices vary depending on the model but this particular bike, called Desert Storm by Royal Enfield, retails for $8,200 + ORC.

All revved up and somewhere to go

MORE than 150,000 visitors turned up to the Goodwood Revival Festival near Chichester in West Sussex, UK last weekend and Cycle Torque’s Dennis Penzo was there, as a guest of Royal Enfield and the marque’s […]

Triumph releases a new video about the new Speed Triple