Eugene Laverty (Aprilia Racing Team) has taken revenge over Marco Melandri (BMW Motorrad GoldBet) after first race defeat for the win to achieve a crucial victory in Eni FIM Superbike World Championship Race 2 at Monza. The Irishman grabbed the lead on the penultimate lap and defended the position from a competitive Melandri, who set the fastest lap of the race right before the chequered flag in 1’42.379.

KRT rider Tom Sykes finished with a second and a third place, new track and race lap records and third place in the championship after two blistering displays of fast riding. The Kawasaki Racing Team rider completed the podium ahead of Championship leader Sylvain Guintoli (Aprilia Racing Team), as both riders were part of the 4-way battle that characterised most of the 18-lap race.

Eugene Laverty
“This was a great day for me. After the podium in Race 1 it was nice to end the weekend with a victory. Especially since I was a bit disappointed because I had a shot at the top step of the podium in the first race as well if I had managed the end differently. We showed that we can be fast and consistent on two very different tracks like Assen and Monza. My RSV4 did extremely well for me. On this track the speed and balance of the bike in braking are essential. The points situation is excellent if you consider the double dnf in Aragon, but I’ve already left those difficulties behind and I count on doing well at the next round in Donington.”

Marco Melandri
“It was an unbelievable day for me. To finish first and second here in Monza is just awesome and it feels great after we had a difficult start to the season. Race one was unbelievable. I knew that my race pace was quite good, even if we struggled a bit in qualifying. When we started, I knew that it would be very tough until the last corner. When Eugene passed me on the last lap, I thought it would be impossible to pass him back again, because he was very good in the turns and he was pulling away. But in the last corner I was quite close, I knew that I could go a little bit faster than the others and so I overtook him and, even though I was a little bit wide, I kept full throttle until the finish line. Until the chequered flag, I was talking to my RR, telling her ‘go, go, go’ – that was incredible.

Tom Sykes
“Today I put it all out there for everybody to see. I could not give any more. Race one was a great race, a great battle although I was like a sitting duck at the back for a time. I was waiting to see where those guys were strong, and they have some speed, so I used that to my advantage and it led to a very exciting last lap. I tried to lead after lap 15 and pull a gap but it was not to be, because they reeled me straight back in. The last lap was great, it was almost a third to first run from the last corner, but I did not want to do anything stupid, so to have the Kawasaki working like that here makes me very motivated. Monza was going to be one of the most challenging circuits we would visit this season but we have come away with pole position, a new circuit record, a lap record and two podiums, so I am happy!”

Fifth place for Michel Fabrizio (Red Devils Roma Aprilia), after a close battle with Davide Giugliano (Althea Racing Aprilia). Both riders had to face a strong Chaz Davies (BMW Motorrad GoldBet SBK), up until the Welshman lost the front at Turn 5 during lap 12.

FIXI Crescent Suzuki’s Leon Camier rode to a determined and extremely impressive seventh place, to confirm his comeback to fitness, equal his best result of the season so far; and move into the top-10 in the championship. Team-mate Jules Cluzel had a second race to forget as he crashed on the second lap and ended his weekend early.

Race 1
Marco Melandri took out race one following a spectacular and highly entertained battle throughout the 18 laps. The 11th race win for the home rider – his maiden on the Italian track – was a perfect display of racecraft, as he entered the final lap in 3rd position and immediately overtook Sykes at Turn 1, then made a successful move on Laverty for the lead. The works Aprilia rider regained first position at the “Ascari” chicane, but the eventual winner was not happy with second place and got along the inside of the Irishman at the last turn, while Sykes tried to take advantage to snatch the victory over both rivals.

The three riders crossed the line side by side, with Melandri winning by 0.085 seconds over Sykes and by 0.107 seconds on Laverty. Sylvain Guintoli

Fifth place for Chaz Davies, ahead of Michel Fabrizio (Red Devils Roma Aprilia) – who made his way up to sixth position following a difficult start – and Loris Baz (Kawasaki Racing Team). was part of the contention for the win but lost ground in the closing stages to finish 4th. 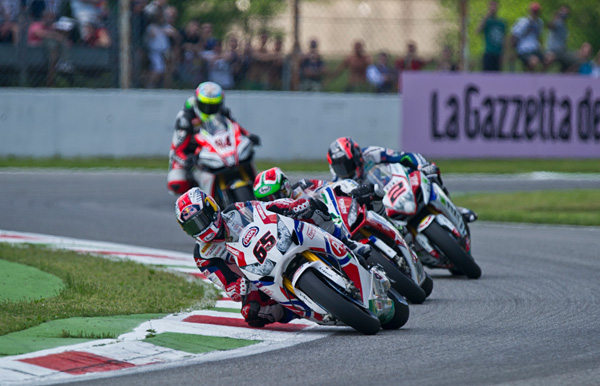 Pata Honda’s Jonathan Rea (above) finished in eighth, though was battling with Davies for a top-five position mid-race before incurring a penalty for running off track in the chicane. Officials forced him to drop back two positions as a result of the infraction.

Mixed results for FIXI Crescent Suzuki’s Leon Camier and Jules Cluzel with Camier coming in ninth place, despite struggling with braking issues for the majority of the race. Cluzel didn’t fare so well, missing his braking point going into the first chicane and went straight on and into the run off zone. He quickly re-joined the race – after losing five places – but was then further penalised with a ride-through penalty for not taking the correct line through the run-off area.

World Supersport
Sam Lowes (Yakhnich Motorsport Yamaha) did an almost impossible overtaking manoeuvre on the last lap of World Supersport race to get his 2nd win of the season and becoming the new Championship leader. The 23 year old from Lincoln had a fantastic drive out of Turn 4 to pass all three riders ahead of him at the following chicane.

Lowes got quickly a small margin on the chasing pack to cross the line in 1st place ahead of Florian Marino (Intermoto Ponyexpres Kawasaki), Lorenzo Zanetti (Pata Honda World Supersport) and Riccardo Russo (Puccetti Racing Kawasaki). The top-5 in today’s race, completed by Kev Coghlan (DMC-Racing Kawasaki) put up an outstanding battle throughout all 10 laps.

Reigning Champion Kenan Sofuoglu (Mahi Racing Team India Kawasaki) lost the front at Turn 8 during the 4th lap of the race, while he was on the lead. Team-mate Fabien Foret didn’t take part to the race after being involved in the multiple crash at Turn 1 that brought to a third red flag – and eventually led to the decision of postponing the Supersport race after World Superbike race 2. Similar misfortune for “Rookie” Michael van Der Mark (Pata Honda World Supersport) who, like Foret,  is currently undergoing medical checks.

World Superbike heads back to the UK for its first home race of the season, as the European round of the WSBK championship with be held at Donington Park in England on Sunday May 26th.

Yamaha’s retro XSR has as just many modern features as any other bike made in 2016. With impressive performance also matching its retro good looks, has Yamaha created the ultimate naked? […]

Kevin Schwantz out of retirement for Suzuka

Keven Schwantz has made the shock announcement that he is to come out of retirement to race the Suzuka 8 Hour with Nori Haga and Yukio Kagayama. […]