WHILE Gai was pissing it up in Flemington because a horse race stopped most of the nation, on the other side of town, a handful of bike enthusiasts were brown-bagging it together. 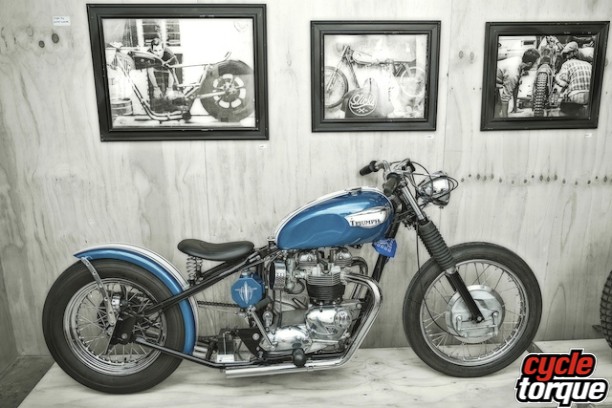 It was the second Oil Stained Brain art exhibition (OSB) at the Kustom Kommune in Collingwood. They ran it last year over in Lonsdale Street and must not have gone broke, moving into the new digs meant the exhibition could be bigger this time around.
The OSB and Kustom Kommune are the Frankenstein brainchildren of writer ‘Richie’ Baldwin and marketing guy Jimmy Goode. They reckon the idea came one day when they went into the street to look at each other’s bikes and thought they have to show the amazing two-wheeled creations nobody gets to see. 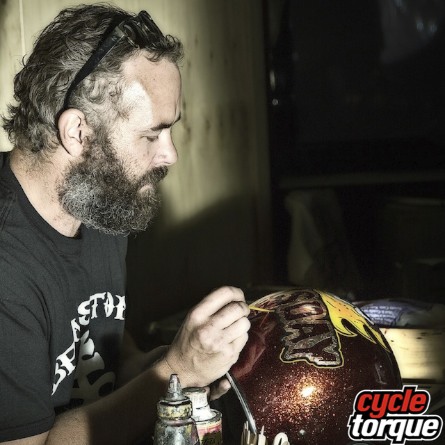 The OSB exhibition featured 30 bikes, hand picked by the guys’ large network of bike builders who wanted their bikes on display.

The Kustom Kommune is a community project for people who want to share the café moto culture, mainly inner city Melbournites who don’t have a garage, kitchen or tools.

This is where people get together and help each other to make their rust-buckets shine. In a 24 hour build, Mark Hawwa transformed an ’02 CB250 into drag-bike: ‘The Nutbuster’. He spent $350, did a few laps around the block on council clean-up day, ate lots of pizza and voila! The front cowl is actually an old bread bowl, a non-functioning turbo replaces the air filter and the seat is a beer drip-tray. Riding it would be guilt free gushing. Mark will thrive after an apocalypse or zombie takeover. Hell, he probably even dreams of the day. 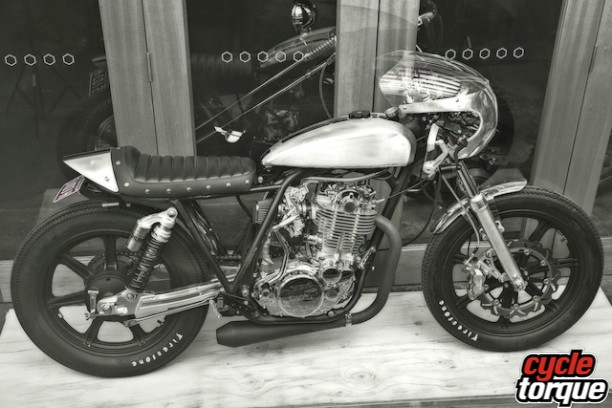 If Australia Post decides to update its image, management should get Jim Clark from Champion Motorcycles to do the dirty work. He works out of the beer garden of the Yarra Hotel humpty-dumptying ex-postie bikes. Unlike all the king’s horsemen, Clark can pull them to bits and put them back together. He re-builds engines, chops fenders and adds leather, rubber and a lick of paint to create a unique spin on the usually highly functional CT110. Jim’s white Postie is named ‘The Tomboy’ and has been purpose-built for a switched-on girl who will use it as her flagship in a mobile hairdressing business. Buzz cuts all round. 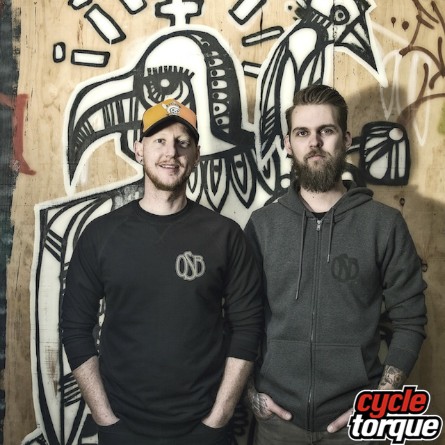 There are no awards at OSB, which means there’s no ego or wankers. The builders are just as enthusiastic as someone who has just bought their first bike off eBay. The building methods are often rudimentary with raw welds, surface rust, cable ties and hand-painted parts all serving a purpose on the build and add to the bike’s story. Chrome was all but obsolete. What those other bike shows don’t understand is what makes the bikes extensions of the owner’s personality, pieces of art. They shape their tools which in turn shape us.

Ryan Mischkulnig hand-stitched an old leather jacket onto a dragster bicycle seat on his BSA hybrid. The Bantam frame cost him 20 bucks at a swap meet. Years later he found an XT250, hit his thumb, shook a paint can and put it all together in three months. Dr Paul McIntosh’s claim to fame besides his pre-nominals is that he owns the world’s fastest Vespa. 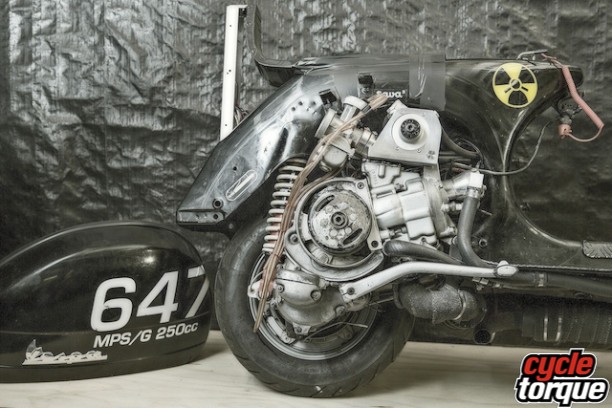 After being clocked at 132.29km/h on Gairdner Salt Lake, Paul increased the power from 8.7 to 32hp. A labour of love, the little Italian should be able to break 160km/h. Paul wants to put a supercharger in it and if his calculations are correct, the Vespa will have more output than a double shot ristretto. 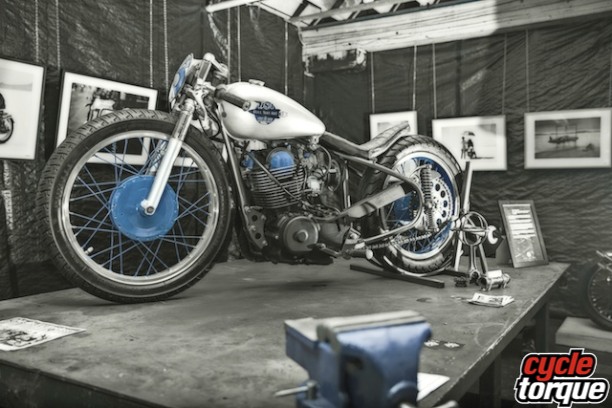 ‘Diamond’ by name, tattoo artist by nature, used some old tubes from his job as a clutch pedal on his ’69 Harley named ‘Dirty Rat’. He found the oil tank in a rubbish pile, stole the wheel covers off an old Ford Falcon wreck and painted shark-teeth on the tank of a BSA Bantam. It’s only ever been started once and it scared the shit out of him. 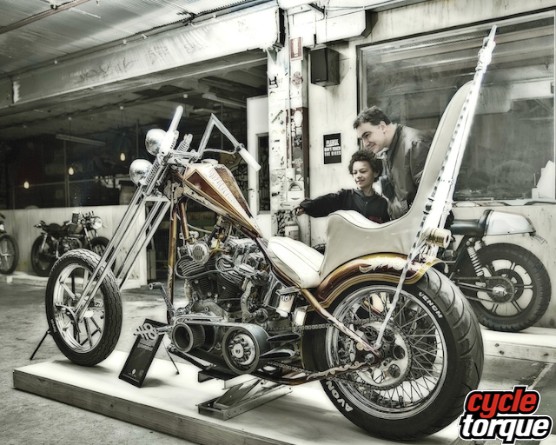 A socially diverse cross section of life took to the Kommune’s art display. Some walked on the wild side of it, others had trades and engineering degrees. It wasn’t just bikes, there was a photo exhibition, custom painting and vintage leathers on display over the two-day event. Sailor Jerry and Asahi came to feature heavily on Saturday’s lu’au/launch party.
DJs played other people’s music, a band played their own. Jimmy and Richie put on a good spread. 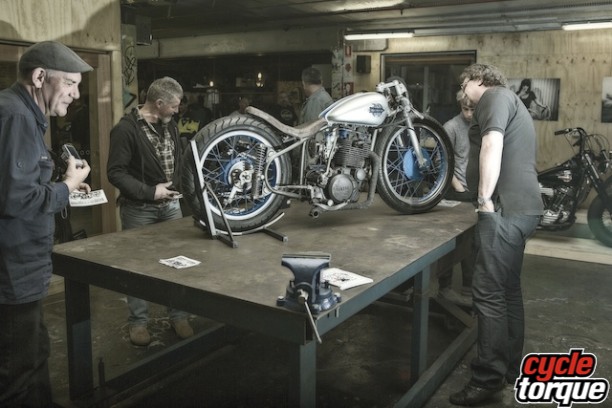 Organiser Jimmy Goode could be found guilty of trying to flog his Honda GB400 by featuring it at the show. It’s currently for sale on eBay if anyone has a spare 16.5k lying around. I’m sure he will have no trouble getting rid of it.
It was built by Raider Motorsport and has a custom flaked paint job that really is one of a kind, though anyone who went to OSB would have learned time, money, a garage and mechanical know-how are all meaningless factors when you get the inspiration to customise what is essentially another man’s trash and your newfound treasure.

WITH cast mag wheels, clip on bars and a kickstart as the sole starting method, you could be mistaken for thinking this machine is straight out of the ’70s. […]