ON PAPER, the Moto Guzzi V7 shouldn’t work. When I say that I mean it in the context of today’s super powerful machines which handle unbelievably well and weigh bugger all. 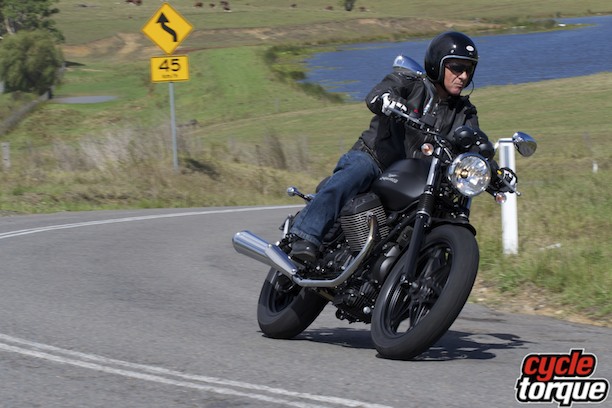 Today we almost expect every new model to be faster and lighter than before to be worthwhile buying. But, and it’s a big “but” here, those types of bikes are almost too over the top for today’s roads, where traffic is higher, roads poorer, and major consequences for doing 45 km/h over the speed limit.

To be fair not everyone buys a modern sportsbike to terrorise the general public on the roads but hopefully you get my point. While I love those types of bikes in the right conditions I also love riding machines which allow me to cruise along and smell the roses so to speak.

The classic motorcycle scene is huge, as is the LAMS market. I see Moto Guzzi’s V7 range appealing to classic owners who also want a modern bike or someone looking for a retro styled machine, plus it’s a perfect step up for riders just off their learner’s licence and who want to go a bit bigger in capacity without going all the way. 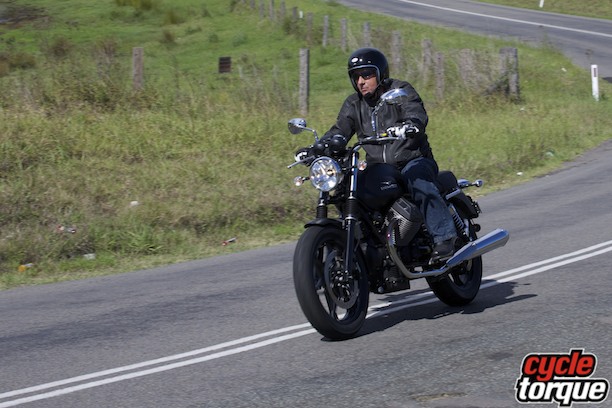 This bike is light years ahead in technology but it still retains much of the classic look. It still uses a 750cc engine in the same Moto Guzzi transverse V-twin layout, and it’s still an air-cooled, 2-valve setup. Of course it’s a much more modern design than the original but hooray for Moto Guzzi sticking to the old school specs I reckon.

A single throttle body sits behind the ‘V’, and there’s also the trademark shaft drive and double cradle frame. Suspension is fairly basic, unadjustable 40mm forks up front and twin rear shocks which are adjustable for preload only.

The Stone is the base model and comes in either satin black or white, with the cool looking Special using different paint schemes, including the 1970s V7 black/red stripe, and the even cooler looking Cafe Racer which uses a chrome plated tank, bikini fairing and sculpted seat among other improvements.

On the road
The V7 isn’t a big bike, and the seat has a scallop in it which makes you sit ‘in’ the bike rather than ‘on’ it. This suits shorter riders but six footers will be happy too.

Ownership for taller riders would possibly entail using an Airhawk seat or similar to get you a bit higher in the saddle, or even getting the seat reupholstered with extra foam. It’s a comfy seat, and the height issue is purely subjective.
The rest of the riding position is spot on for this type of bike.

Starting the bike is easy enough, with the typical V-twin rumble and shimmy shake as the bike warms up on the stand. It likes to warm up a bit before you ride off and although torquey, the engine doesn’t like you to be lazy on the throttle when you ride off, especially when cold.
Nice to see Moto Guzzi has left some character in it.

It’s got a five speed gearbox which is a real sweety. Ratios are well spaced and even though it’s got only 50 horsepower on paper, it does feel stronger than that

It’s a bit of a minimalist machine the V7. It’s only got a single front disc with a 4-piston caliper, and it’s only wearing a 100 front and 130 rear tyre. But it only weighs 179 kilos with an empty 22 litre tank, which by the way gives you a very decent fuel range, and the smaller tyres help the bike feel very, very nimble in the bends.

Power is strong enough off the bottom, and while the previous V7 tended to run out of puff as the revs went north, the updated V7 however has more top end.

Gearing is still lowish so don’t expect to be doing 200 km/h everywhere. It’s definitely happier on back roads rather than a jaunt from Sydney to Melbourne down the Hume. It’s equally happy cruising along or going for a sprint through the bends.

There’s plenty of ground clearance and despite only having a single disc on the front it does pull up well. It’s not a bike that likes you to rush up to corners, rather it appreciates the smoother approach.

Ride quality is alright too. Just because there’s two shocks out the back doesn’t mean they don’t work. It would be nice to have a spot more travel out of the forks but they are fine generally speaking, while the rear shocks are set up firm without being too hard.

Normally you would expect the shocks to have only 3-4 settings but the Sachs units fitted to the V7 have threaded adjustment so can be tailored to a far greater degree. 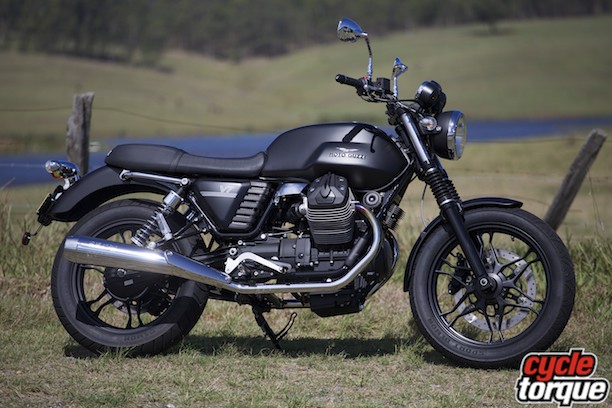 Verdict
The V7 is very much a rider’s machine. It’s great fun to ride and while not overly fast or pin sharp it’s very smile inducing.

Really, the V7 does have many prospective clients. From returning riders to those stepping up, or those looking for a no-frills retro classic, the V7 is a very smart choice.

“I recently got my full licence and have mainly been riding an old Suzuki GN250. I was a bit nervous about riding the Moto Guzzi V7 but after sitting on it I realised it wasn’t too big, and after some practice runs around the car park near Cycle Torque I felt comfortable enough to venture out into the traffic by myself.

“It’s not an intimidating bike and it’s lots of fun to ride, even for a relatively inexperienced rider like myself. The previous biggest bike I had ridden was a 650cc cruiser, but I never felt comfortable with the riding position and the way it handled. There was none of that with the 750cc V7.”