Moss will line up alongside teammate Rhys Carter in the two-rider factory MX1 operation equipped with the championship-winning RM-Z450 as the season resumes, coming off a convincing overall victory at Broadford’s opening round a fortnight ago.

Multiple-time Australian motocross and supercross champion Moss enters the weekend in a positive frame of mind following two weeks training alongside twin brother and arch-rival Jake Moss, excited to carry the championship leader’s red plates into the second round.

“I’m really relaxed for Appin,” Moss explained. “I’ve been riding with my brother and I feel comfortable training with him. I feel like it will be a similar race to Broadford with the same guys at the front, so it’s just a matter of getting out there and doing what I do. The plan is to win, that’s for sure.”

With showers forecast in the area ahead of the weekend, Moss insists that regardless of the weather and track conditions he’s ready to go racing at what is his ‘home’ venue of the calendar.

“I’m doing a rain dance ,” he continued. “I hope it rains, I love the mud, and I am looking forward to it no matter the conditions. If it’s dry then I know we will be good and if it’s wet then that will be good too; we haven’t had a ‘mudder’ in a long time now.” 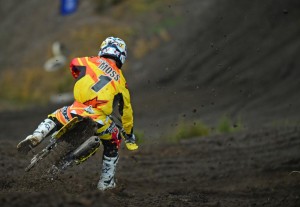 Moss and Team Motul Suzuki have made a number of revisions to the bike set-up following Broadford, targeting further improvement to ensure they gain strength as a combination throughout the 10-round season.

“We made some changes with the RM-Z450 since Broadford, as you always do after the opening round just to refine the settings,” added Moss. “Overall as a team we should be a lot better off than we were a couple of weeks ago.”

Team Motul Suzuki teammate Rhys Carter is also in a buoyant mood entering Appin – a circuit that he favours on the calendar – after coming off a standout performance at the season-opening event a fortnight ago.

The Kiwi rookie was elevated to fifth overall at Broadford following an initial timing and scoring miscalculation, which comes as an added confidence boost in what is his first year in the premier MX1 category.

“It kind of shocked me where I ended up at Broadford,” Carter commented from his base in New Zealand. “Finishing in the top five overall there definitely gives me confidence for this weekend and Appin is a circuit that I like – it was one of my best rounds last year.

“I’m really looking forward to the round, so with two extra weeks on the bike things are going to plan. It has been raining a lot here, but I’ve ridden a few times and am feeling more and more comfortable on the RM-Z450 each time I ride it.”