Matt Moss (Team Motul Pirelli Suzuki) took out the final round of the Pro Open Milwaukee presents the Terex Australian Supercross Championship which concluded in spectacular fashion at Toowoomba showgrounds over the weekend.

With the title fight in the Pro Open and Pro Lites going down to the wire, Australia’s elite staged a spectacular upset over their American rivals. 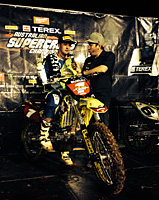 Moss (pictured right), who was five points behind US rider Josh Hill coming into the round, dominated the 20-lap final, leading from start to finish to clinch both the race win and title ahead of his twin brother, Campbell Mining Suzuki’s Jake Moss. Monster Energy Kawasaki rider Jay Marmont rounded out the Round 6 podium.

The race was not without controversy with Hart & Huntington/Insure My Ride/DPH Motorsports mounted Hill, and Jake Moss coming together on the second lap of the race, in an incident that is still under review with Motorcyling Australia officials.

For Matt Moss it was the perfect end to an incredible 2013 season in which he secured both the national motocross and supercross championships.

“It feels really good,” said Matt Moss. “To be honest it was a little bit unexpected but I knew I wanted to get the job done.

“I knew I could win it was whether Jake could beat Josh, it was in someone else’s hands. Once I saw that Jake and Josh had come together it was smooth sailing. Having my brother behind me, I knew he wasn’t going to do anything to jeopardise it for me.

“I have some plans for 2014, I definitely want to defend both titles but before that I want to go and race the first five rounds of the AMA Supercross in America. I feel I am fit and ready so why not give it a shot now.”

“It is awesome for Matt and I to be one and two in the championship and it is an incredible feat for a privateer to finish runner-up.

“Josh (Hill) and I had words after practice, he thought I got in his way and it left a bit of a sour taste in my mouth. He didn’t want me to have the pass and we collected each other but he got the worst of it”.

Jay Marmont rode well to secure his second podium finish of the 6 round SX series. After a mid pack start, Marmont rocketed to the lead group on the first lap. After jostling with Jake Moss throughout the race Marmont eventually wrapped up third place for the moto.

Marmont’s points haul from the round left him in fourth place overall for the series.

Jay Marmont: “It was a great way to finish off the year. I felt good all day. I didn’t get the best start but I really trusted my Dunlop tyres into the first turn and was able to charge and came out in fourth or fifth. From there I rode well to finish in third place. It was really good to finish on the podium again. I’d really like to thank Monster Energy Kawasaki, my sponsors and fans for their support throughout 2013. I’m looking forward to 2014.”

A bruised and battered Josh Hill retired from the 20-lap final and despite not scoring any points from the round still finished the season third in the championship.

It was a case of déjà vu in the Pro Lites final, with Serco Yamaha’s Luke Styke taking the title ahead of Carlton Dry Honda Racing’s US import Gavin Faith.

Faith, who also took a five-point lead into the weekend, crashed twice in the final and finished the round eighth. Styke controlled the 15-lap race from the onset to greet the chequered flag ahead of Choice Motorsports Brendan Harrison and his Serco Yamaha teammate Luke Arbon.

“It is a dream come true, two titles in 2013, it hasn’t really sunk in yet,” Styke explained.“ I was concentrating on the motocross this year and the plan with supercross was to hopefully play it safe and look forward to Europe.

“I really can’t believe it I am lost for words and can’t thank the team enough for sticking behind me. Everyone trains hard but it is the guy who puts in the most work that ultimately ends up on top,” Styke concluded.

Gold Coast rider Jay Wilson secured the Under 19’s title with a second place finish to Berry Sweet Yamaha rider Corey James in the final round.

The GTYR Yamaha rider dominated the 2013 season winning four of the five rounds to take the title 19 points ahead of James.

Yamaha’s Wilson Todd edged out KTM rider Brock McLeary in the Junior Lites class. Winning the fourth round of the series, the Queensland rider finished four points ahead of McLeary in the championship standings.