Starting from pole position Marquez World Champion Marquez was as low as sixth on the second lap after a hectic first lap bumped him down the order. The young Spaniard recovered well and eventually overtook Jorge Lorenzo (Movistar Yamaha MotoGP) with eight laps to go.

Marc Marquez: “The first lap was very difficult and we lost some ground, but we focused and recovered well. The key to winning this race was managing the tyres well, especially the rear tyre. My riding style can be very hard on rear tyres, so I had to focus hard to save some tyres for the end,” commented Marquez.

“I know the season is very long. Of course in Jerez we will try and win as we never know what will happen in the future. Dani is very strong and only 19 points behind me and we’re going to his favourite circuit!”

Pedrosa was also shuffled down the pack on lap one, having to fight back from seventh. The Spaniard battled with Stefan Bradl (LCR Honda) for the first half of the race and then closed the gap to Lorenzo, overtaking him on the penultimate lap.

Dani Pedrosa: “Unfortunately I was not so quick at the beginning, after all the mess of lap one I was stuck with the group and couldn’t make an early pass to be quicker. In the end I was coming strong, though it took me some laps to find the rhythm.“

“I enjoyed it but also kind of hated it because I was alone in third for much of the race. It is a great result for the team and next week is Jerez, which is a track I like.”

Lorenzo (Movistar Yamaha MotoGP) led for 16 laps after making one of his trademark starts, putting in some impressive early lap times until lap 17 eventually saw Marquez take the lead from Lorenzo who was then defending second place until the penultimate lap. As Pedrosa passed Lorenzo the latter appeared to decide it was best to secure third rather than battle for second.

Jorge Lorenzo: “This is probably the most sweet third position of all my career. We showed that even not in our best moment we can fight with these guys. We must keep pushing. Pedrosa was so strong at the end of the race, I was very tired and I tried my hardest to stay in second place. I decided to stay third and finish the race.”

“This year is more difficult than every other year because of the engine freeze, but we can still improve the electronics and the chassis. I can also improve my riding style and with the mechanics.”

Valentino Rossi (Movistar Yamaha MotoGP) was briefly into second early on, but ran wide twice and dropped to seventh before fighting his way back up to fourth.

Valentino Rossi: “I had the potential and the pace to end on the podium and especially to fight with the three guys in front.” Unfortunately in the first laps I made a mistake and lost a bit, but the place I really lost out was when Stefan Bradl made a mistake. He arrived too deep in braking and he pushed me out of the track and I lost two seconds on that lap and so missed the podium.”

Solid runs from Stefan Bradl (LCR Honda MotoGP) and Andrea Iannone (Pramac Racing) saw them finish fifth and sixth – and they were 15s and 19s respectively back on Marquez. Iannone secured his best result so far in MotoGP, which saw him finish as the top Ducati rider.

Aleix Espargaro (NGM Forward Racing) was 15th after an early crash, whilst there was another DNF for Alvaro Baustista (GO&FUN Honda Gresini) who crashed on the first lap, as did Danilo Petrucci (IodaRacing Project).

Moto3 – Jack Miller on the podium

The crowd saw another spectacular and intriguing Moto3 race with Romano Fenati (SKY Racing Team VR46) taking the honours.  Alex Marquez (Estrella Galicia 0,0) and Jack Miller (Red Bull KTM Ajo) joined the Italian on the podium. Fenati made his way through touching Marquez and Miller at the last corner to take the win. 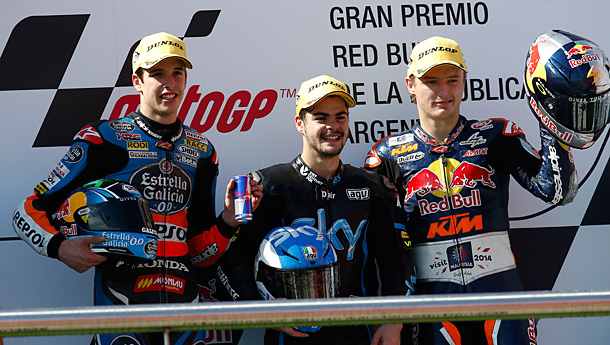 Marquez and Miller appeared to be unhappy with Fenati’s late move but the race result stood after it was reviewed by Race Direction, though the Italian was later given a one penalty point punishment for ‘irresponsible riding causing danger to other competitors’.

A brilliant ride from birthday boy Livio Loi (Marc VDS Racing Team) saw him clinch fourth spot as he came from ninth on the grid on the day he turned 17.

Efren Vazquez (SAXOPRINT RTG) ended up crossing the line sixth, just behind compatriot Alex Rins (Estrella Galicia 0,0), with the former having run at the front for most of the race.

For a limited time you can pick one up (and your choice of matching accessories) on a lean, mean 5.99% comparison rate with KTM Sportmotorcycle Finance. […]

Yamaha launches ‘Biggest Ever Sale’ again in 2013 across range

Yamaha Motor Australia turns 30 this year. In order to celebrate this milestone, Yamaha are bringing back the ‘Biggest Ever Sale’ with deals across most of their range. If you’re interested in a Yamaha, click to find out more. […]