Repsol Honda’s Marc Marquez was back on the top step of the podium after an intense encounter with Jorge Lorenzo at the Hertz British Grand Prix, with Valentino Rossi joining them on the podium. Marquez became the first rider since Valentino Rossi in 2005 to win 11 MotoGP races in a single season.

Lorenzo took the initiative to pull out in front in the early stages but Marquez stayed with the front group and took the fight to his Movistar Yamaha MotoGP rival. Marquez had the pace to catch Lorenzo, but made two slight errors, giving Lorenzo the opportunity to retake the lead twice.

An epic battle ensued on the final two laps with the riders touching briefly before Marc was able to make the pass stick, eventually crossing the line 0.732s ahead of Lorenzo. 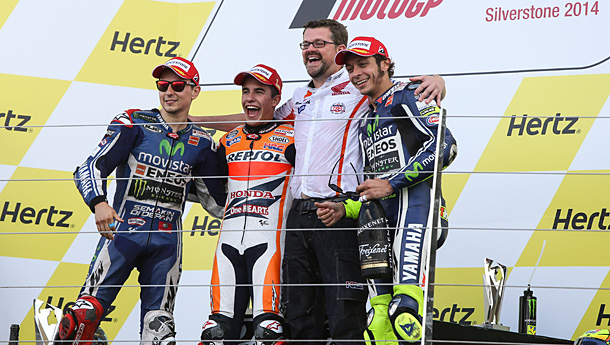 Marc Marquez: “I’m very happy with this win! I expected the race to be slightly different, given what happened in practice yesterday, but today with higher temperatures it seems that both Jorge and Valentino took a step forward. Above all, Jorge, because he had a great pace and we were fighting right to the end. It was important to win today, after missing out at Brno. I also had a score to settle from last year, when Jorge beat me on the final corner, so I am happy to be back on the top step of the podium!”

Jorge Lorenzo: “Knowing what this weekend was like, this race is much better than we expected. I made a really good start and pushed 100%, more than ever, so I am really proud of my riding. The only thing is that here we probably don’t have the best package. Though we did a really good job improving little by little and practice by practice, we were not able to have the same confortable pace as Marc. I was pushing a lot and maybe he was able to relax a little bit more. I was struggling a lot with my physical condition to keep the bike on two wheels and being able to ride these lap times.

“Finally I lost a lot of time when he touched me. I knew that he was going to try to overtake me in this corner in first gear on the right, but I didn’t let him enter. On the outside I opened the throttle and he touched me. In the next corner he touched me again as he went into the corner and I lost seven tenths of a second. We started the weekend 1.3 seconds slower than Marc and we finished the weekend with being just 7 tenths slower than Marc after twenty laps. That’s fantastic!”

Valentino Rossi: “I’m happy for the podium. It’s the first time here at Silverstone and usually this is a very difficult track for me. I am very happy about my pace at the beginning, because Jorge was in front and pushing a lot, so the lap times were very fast. I was able to stay with them for the first laps, but unfortunately I had already a small gap when I was behind Dovizioso.

“To try and catch them I stressed the rear tyre too much, so I had too slow my rhythm and from that moment I started a very hard battle with Dani and Dovi to the end. I decided to stay in front because I had a quite good pace and I could arrive on the podium. We have a lot of positive things. We have another podium. On the other side, I wanted to stay behind Marc and Jorge throughout the race. We have to do another step to prepare 100% for Misano in two weeks, because that will be my home Grand Prix and we will have to do more than the maximum.”

Rossi made it onto the rostrum but was trailed by just 0.175s by Pedrosa and 0.544s by Dovizioso. ‘The Doctor’ set a new outright record of 246 starts in the premier class of Grand Prix racing in the Silverstone contest.

Dani Pedrosa: “Today’s race wasn’t easy. I had a bad start and on the opening laps I lost a little ground on the frontrunners, although to be honest I didn’t have the same pace as the leaders afterwards either. However, we fought with Valentino and Andrea and in the end we gained a place on the final lap. It hasn’t been our best weekend, but we will try to be back up at the front again at the next Grand Prix.”

Cal Crutchlow (Ducati Team) was down in 12th, whilst Bradley Smith (Monster Yamaha Tech3) was 22nd after experiencing a rear end problem.

Alvaro Bautista (GO&FUN Honda Gresini) crashed out towards the end of the race, ruining his quest for a top ten finish.

Moto3 was won by Alex Rins on the final corner, with Alex Marquez and Enea Bastianini also on the podium. Pole man Rins (Estrella Galicia 0,0) was pushed right to the limit by his teammate Marquez and by Bastianini, who both provisionally led the race. The winning margin between Rins and Marquez was just 0.011s, with Bastianini (Junior Team Go&FUN Moto3) just 0.061s back on Marquez.

Jack Miller (Red Bull KTM Ajo) finished a hard fought sixth at the Silverstone circuit but managed to hold onto his lead in the World Championship standings.

Jack Miller: “I wanted to stay in the first group throughout the race, but some other riders made mistake which caused us to lose a lot of distance from the front. We had the pace and we were there lap after lap, but in the end we couldn’t manage it. We suffered a bit this weekend, both with my riding as well as with set-up. Now we have to get back on a positive trend and focus and on the next two GPs in Misano and Aragon.”

Miguel Oliveira (Mahindra Racing) was unlucky to miss the podium, having run with that front group. He eventually finished fourth and was just 0.051s away from a rostrum result. A further four and half seconds back Jakub Kornfeil (Calvo Team) won a battle for fifth involving a huge group of riders.

Wild card Joe Irving crashed out in the early stages, with Efren Vazquez (SAXOPRINT RTG) also going down early on. New Mahindra Racing rider Andrea Migno was another crasher, though fortunately all those riders were uninjured. Scott Deroue (RW Racing GP) was forced to retire with smoke coming from his exhaust late in the race.

Yamaha’s retro XSR has as just many modern features as any other bike made in 2016. With impressive performance also matching its retro good looks, has Yamaha created the ultimate naked? […]

Wins for Lowes and Byrne at Silverstone BSB

Alex Lowes moved four points ahead of Shane ‘Shakey’ Byrne in the MCE Insurance British Superbike Championship standings after the opening race at Silverstone where they both finished on the podium along with Milwaukee Yamaha’s Tommy Bridewell. […]