The reigning World Champion was the man to beat for the second day of the Grand Prix weekend,  delivering a 1’38.673 on his sixth lap to secure the number one slot on the grid in front of his home crowd.

Jorge Lorenzo
“I’m happy with this pole position, it’s a good present for my birthday! I knew the track was not perfect, it’s very warm and there were a lot of crashes in Moto2 and the previous qualifying. I just tried to make the perfect lap, unfortunately I couldn’t; I made a mistake in two braking zones and went wide and lost some tenths. Anyway, in the other corners I was really quick and at the limit so it was enough to make it. It’s going to be tough tomorrow, normally the lap time you make for qualifying you can’t repeat in another time because the tyre drops. We hope to improve the bike a little bit to get more comfortable with pace. Anyway I think we can fight for the win or at least for the podium tomorrow.”

The Honda pair qualified second and third, less than a quarter of a second behind Lorenzo, in a crash-strewn, all-action 15-minute session. It made an all-Spanish front row, for a second race in succession, but in reverse order compared with the last race.

Pedrosa was one of several riders to fall, after rising ambient temperature heated the track surface, costing grip and predictability. The 27-year-old Spaniard was not hurt, but admitted he had been “pushing too hard” in an attempt to secure his first pole position of the season.

Dani Pedrosa
“The session went well, but at the end I had a crash in turn eight, as I maybe pushed a little too hard and lost the front. We’ve ridden well all weekend and the bike is working great, so we are hoping that tomorrow we can continue in the same way. Pace is the most important thing and I hope to get a good start and have a strong race.”

Marc Marquez
“I’m pretty happy, because the session went better than I expected. We knew it would be a tough and difficult weekend, but I think we had a very good qualifying session and starting from the front row is very important. I know that Dani and Lorenzo are one step ahead at the moment, but I will still try to give 100 percent and ride my own race. It will be hard, hot, and very demanding on the tyres, but we will try to get a good result in front of the home fans” 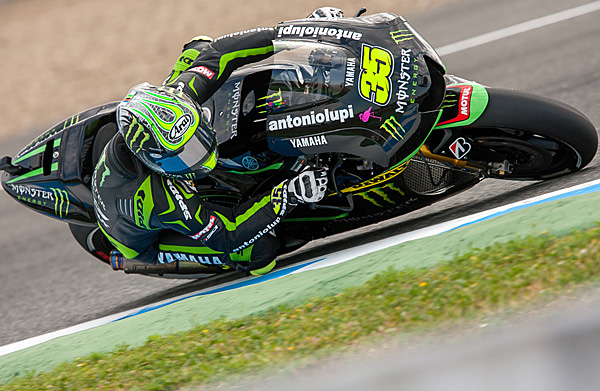 Yamaha Tech3 Racing’s Cal Crutchlow (above) and Lorenzo’s team-mate Valentino Rossi also crashed unhurt in the session and will start from fourth and fifth positions respectively. Seen from OnBoard cameras to be holding the left-hand side of his back once qualifying had ended, Crutchlow was taken to the circuit Medical Centre where results of ‘OK’ were given for pelvic and lumbar x-rays. An ultrasound was carried out on his left kidney in relation to the pain he was suffering, with the result also being declared as ‘OK’ before a second ultrasound took place later in the evening.

Cal Crutchlow
“It has been a very difficult day for obvious reasons,” he said, eventually being able to speak to the press some three and a half hours after qualifying finished.

“The two crashes were very big but the second one was particularly hard because it was very fast. The first crash: the temperature was quite a lot different from the morning and I just got caught out and it was my own mistake. In the second crash, some people felt there was something on the track but I don’t think that was the case, to be honest. I made a mistake in the braking and, rather than going straight, the front brake level locked into my hand.

“It seems everybody is struggling and it is not like me to have two crashes in one day. I’m a bit battered and bruised but it won’t stop me from giving it 100% in tomorrow’s race.”

Alvaro Bautista (Team GO&FUN Honda Gresini) was sixth, and will start the race directly behind Marquez on the second row of the grid. Bautista is the only rider using Showa suspension, combining racing with a testing and development role.

Seventh and ninth will be the starting positions for Ducati Team’s Nicky Hayden and Andrea Dovizioso. Hector Barbera was delighted with his performance, not only did he head directly into Q2 qualifying thanks to his top ten effort of practice, but the only CRT rider present in the pole position shootout went on to out-qualify two other riders – although it must be noted that Iannone was carrying a leg injury following a crash in final practice.

Rookie Bryan Staring (GO&FUN Honda Gresini FTR Honda), still finding his feet in the top class of bike racing, qualified 18th, significantly his best so far. The Australian moved from the back to the middle of the CRT pack, taking a step closer in his quest to win his first points in the premier class.

Pramac Racing will skip Monday’s post-race testing after Andrea Iannone was injured on Saturday. After qualifying, it was confirmed that Iannone will require minor surgery to his left knee. Ben Spies did not travel to Spain after doctors advised him to rest in order to resolve an issue with a pectoral muscle.

Yamaha announced in a press release yesterday that there will be two new MT-07 models coming to Australia. One is LAMS approved, the other packs a punch. […]