FROM its bright orange trellis frame to the purposeful lattice swingarm and aggressive graphics, the new KTM 390 Duke is a learner rider’s fantasy. With 44 horsepower available in a lightweight package and the racing legend which is the KTM factory behind it, the latest Duke should set the hearts of young motorcyclists racing. 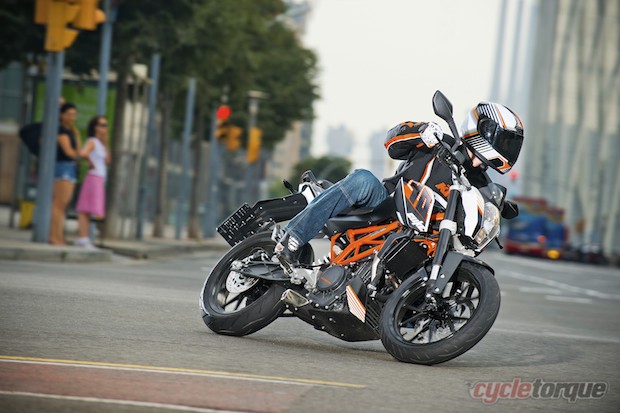 A serious motorcycle for the years in which youngsters are restricted in what they can ride, and for seven grand plus on road costs, it’s a machine many will be able to afford, too. Expectations are always high from the European manufacturers, and especially KTM and its ‘Ready to Race’ slogan, which was everywhere during the launch.

Although few Duke 390s will ever have a track under their wheels, the point is the machine comes from the people who are winning bike races, from motocross to enduro to Moto3. Sport, and winning, is in the DNA of every KTM. 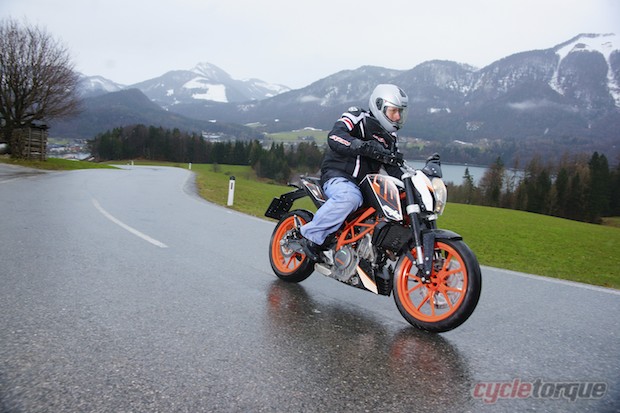 KTM builds single and twin cylinder motorcycles – but its smallest twin is a 990, and that engine is surely to be phased out in favour of the new 1190 twin. With all its other engines being singles, from 125cc two-strokes to the 690 four-strokes, KTM is heavily structured toward one-lung motorcycles, and the Duke 390 is no different there.

A single pot helps keep weight down, and KTM hasn’t adorned the machine with acres of bodywork to weigh it down, so the sprightly engine is allowed to shine. Knowing the bike would be targeted at learners, it was built to be very user friendly, but it also offers a good turn of speed and usefulness to make the bike popular with riders who could choose a large bike if they desired – the commuters, the occasional riders, the person looking for a lightweight, easy to own machine which has some character without a high price. 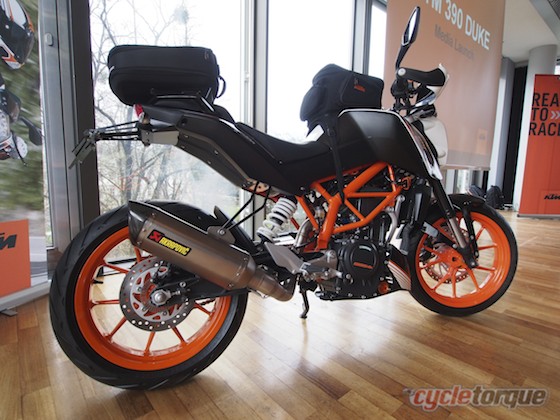 Designed around the formula of a 690 stunt machine, the Duke 390 was to be affordable, compact, light, fun and agile.
To make it affordable, it’s being built in India by Bajaj Chakan, the Indian company which bought a large stake in KTM a few years ago.

KTM staff from Austria spend a lot of time in India doing quality control, and Indian-sourced components are developed in conjunction with KTM partners – Brembo, for example, has worked with the Indians to build the braking system, badged “Bybre” (by Brembo). The styling is strong, aggressive and angular, very much in keeping with the rest of the Duke range, and very distinctive, too. You won’t mistake the Duke for any other brand of machine easily. It’s got the goods, too: ABS, USD forks, bellypan, bright orange frame, die-cast aluminium swingarm, comprehensive instrumentation… all this adds up to lots of functionality, but also makes the bike attractive to buyers. From a practicality point of view the Duke has a 10.5 litre tank but sips it slowly – 250km is the range I’d expect, although we weren’t able to do fuel consumption tests during the launch.

“Precise steering, a low centre of gravity and comfortable riding position made the ride easy…”

The result is a bike which will compete with Japanese sportsters and commuters, offering a European-brand experience to first-time road bike riders – and that option has been pretty rare, especially in the sub-$10,000 price bracket.
This means KTM’s joined most of the major manufacturers of the world in building at least some of their bikes in foreign markets – we’re now seeing bikes from major manufacturers being built in Thailand, Brazil, Korea and lots more countries you don’t normally associate with motorcycle manufacture. 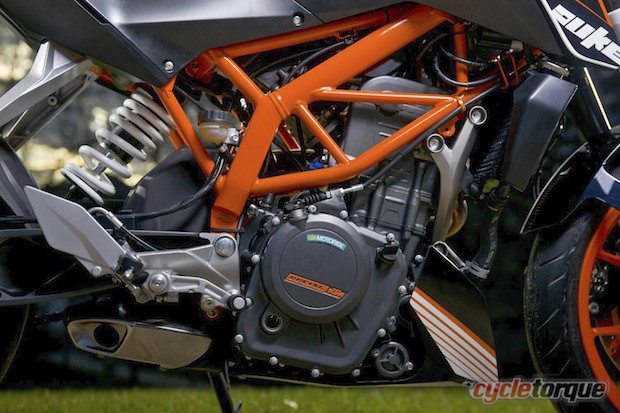 Designed and prototyped in Europe, the 390 Duke is being pitched as an alternative to maxi scooters, at least in part because it’s cheaper and sportier. KTM does offer some luggage for the Duke, but you’re hardly going to carry the load of a scooter though. It’ll do a lot a scooter won’t though, thanks in part to the DOHC, four valve 372cc four-stroke single powering the machine.
The engine’s light, the chassis too. High tech internals have helped the motor produce 44 horsepower (32.8kW) and good torque, too: this, combined with the lightweight running gear of the Duke makes for an easy to ride machine which doesn’t run out of puff too soon. It’ll easily run at highway speeds all day, but is just as comfortable sneaking through city traffic on the way to work. 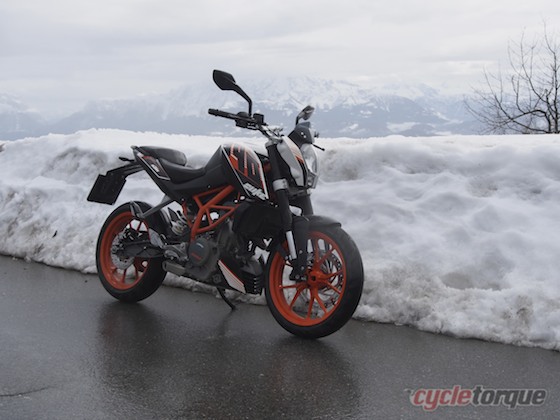 It’s a new engine – there’s a family resemblance to some of the enduro powerplants, but KTM assured us it’s all-new – and remarkably compact. With a stacked transmission the engine is short front-to-back, which allowed for a long swingarm, which is great for handling without compromising the wheelbase length. This adds up to the compact and lightweight feel of the machine once you’re rolling.

Of special note are the brakes – an ABS-equipped single disc at each end. ABS is going to be compulsory on road bikes in some countries in the near future so KTM is future-proofing itself somewhat, but it’s still great to see. There are a few areas where costs have dictated compromises, but thankfully they are few – non-adjustable levers are one, a single disc on the front is another. However, unless you have really small hands or are a demon braker, these things shouldn’t bother you. 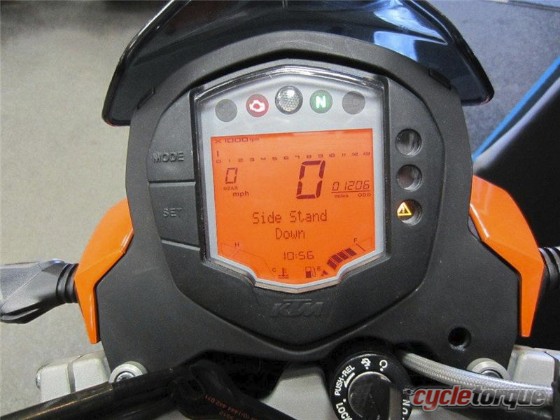 KTM had transported Aussie journos all the way to Austria for the world launch of the 390, such was the importance of the new model, and what a wonderful place to ride motorcycles is KTM’s birthplace. It was a shame most of our riding was over wet roads, but the grip offered by the standard Metzeler Sportec M5 tyres was awesome – Austrian road engineers could show their Aussie counterparts a thing or two I reckon. But back to the bike – we were riding through beautiful mountains near the end of spring, which is why the snow-lined roads are a feature of the photos, and having a great time.

The traffic in Salzburg was a typical European hassle, the narrow roads and heavy traffic making progress slow, although the nimble Duke threaded its way through the melee well. Turning off the highways and into the mountains was welcome, although the roads didn’t get any wider – tight, slow and narrow for the first part of the day’s ride. Again, the lightweight and nimble 390 was well suited to these roads. Precise steering, a low centre of gravity and comfortable riding position made the ride easy and a lot of fun. 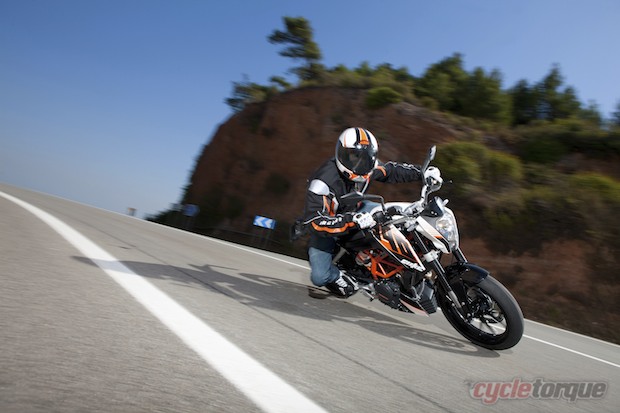 We did a couple of photo stops on the way to Wolfgangsee Lake, a beautiful lake surrounded by snow-capped mountains and green countryside. Great food warmed those of us who hadn’t packed winter riding gear – which turned out to be mostly European journos, the Aussies ride year-round and having cool temperatures and water around didn’t faze those from Down Under.
Our hosts were optimistic of some dry roads on the way back to Salzburg, but that wasn’t to be, but I was shocked at the lean angles we did get out of the 390 Duke in the afternoon, despite the wet weather.

The grip provided to the tyres by the well-drained and high-quality surfaces was astounding, and the bike inspires confidence. The suspension performance, too, was excellent. KTM owns White Power, so the factory’s ability to develop high quality suspension at very reasonable prices is legendary. I was interested to note the available wheel travel of the suspension – 150mm at each end – was around 10-20mm more than comparable LAMs machines from the Orient, which potentially means better handling on the awful goat tracks we call roads in Australia.

The proof will be in the riding when the bikes get to Australia, but giving a bike more suspension travel than usual seems like something which would be built into KTM’s dirt bike DNA. There’s little adjustably in the suspension, just preload at the rear, but I wasn’t expecting more. Personalisation KTM has long produced special components for those wanting to extend their KTM’s performance or functionality, and the 390 is no different. There’s a tankbag, seatbag, performance exhaust, handguards, anodised replacement components, crash pads, an alarm… even a KTM factory racing decal kit. So the 390 can suit the kid looking for high performance, or the commuter who needs to carry some gear… who says bikes can’t be versatile anymore? 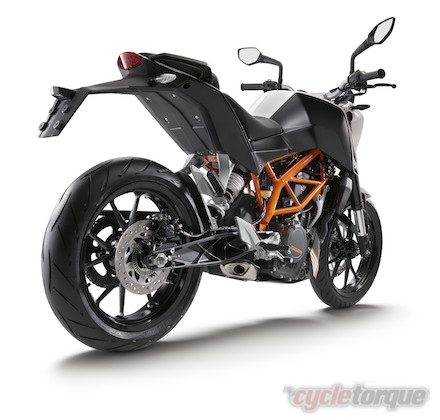 The 390 Duke slots into the middle of the single cylinder Duke range, joining the 125, 200, 690 and 690R. The 125 has been a big seller for KTM in markets which suit small road bikes, the 200 has quickly become the best-selling road bike from the company, while the two 690s are perennial favourites among the single-pot loving crowd. The 390 is likely to become the best-selling KTM road bike in Australia, its LAMs accreditation and pricing making the machine really attractive. 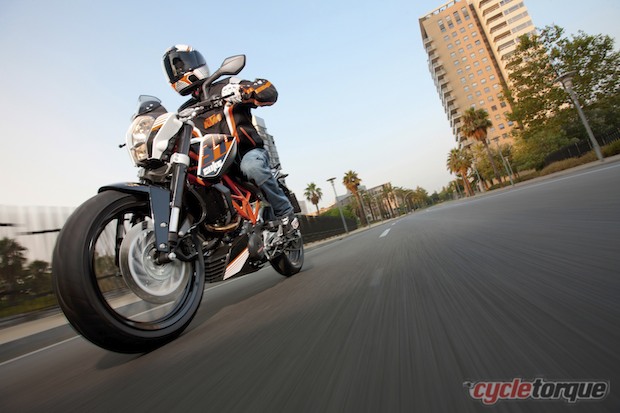 Back when I was a lad, many motorcycle magazines recommended the Honda CB250RS to youngsters looking for their first roadbike.
Of course, I didn’t buy one, I was stupid enough to believe I could ride the Yamaha RD250LC, a rip-snorting two-stroke which produced a heap more power but at the price of a narrow 3000rpm powerband – the power came on like you’d flicked a switch and the bike would take off like a scared rabbit. I crashed my brains out learning to ride that thing. Today’s learners now aren’t allowed to ride modern versions of the RD250LC.

The funny thing is, the KTM 390 Duke produces more power, more torque and weighs the same as an RD250LC – and I can heartily recommend it to learners. The power is produced in a far more linear way, so your speed builds up rather than snaps in, and the bike handles so much better than the cross-ply equipped machines of the early 1980s (but if anyone has one they want to sell, please let me know, I’m getting nostalgic). I recommended the unfaired single cylinder Honda CB250RS to friends: who took the advice and loved them. These days there are singles, twins and even four cylinder LAMs road bikes available, which is awesome – something for pretty well everyone. The Duke 390 is pretty unique in that it’s from a European manufacturer and is priced well under $10,000.

With major engine refinements, significant weight savings across the board and great suspension, KTM’s 2017 450 EXC-F adds character to an already to race machine… […]

Check out the videos for the July 2013 edition…we have our first instalment from our February trip to Cambodia, a tour of the KTM factory in Austria, the new KTM 390 Duke and the Yamaha R15. […]