BEFORE riding the KTM 1290 Super Duke R I had it in my head it would be a fire-breathing thing with minimal road manners and not much in the way of any creature comforts.

The reasoning behind this was a video I watched on YouTube which showed some European bike tester flipping the bike big time. He was all Steve McQueen cool too, stepping over the seat of the bike as he rode off, then giving the bike a shot of throttle which ended up in the new 1290 cartwheeling up the pit lane of some nondescript circuit in Euro Land. Bloody hilarious if you ask me. 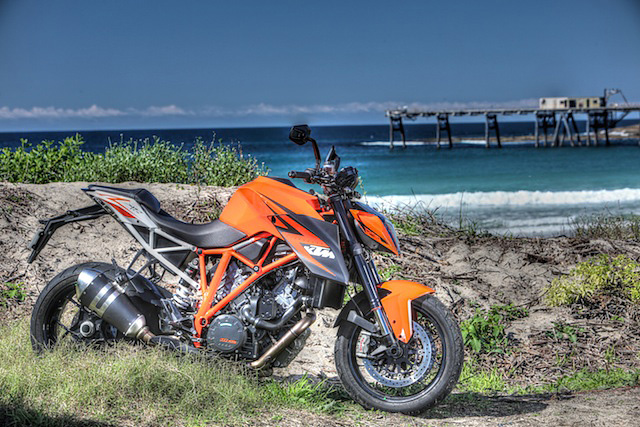 After watching the video about 20 times I made a mental note not to turn the traction control off when I ended up riding the orange monster. But don’t take my word that it’s a monster. A quick look at the specs sheet says it all.

Try 123kW (180hp) and 144Nm of torque. Peak power is delivered around 8800 rpm while torque is at 6500rpm. It weighs under 190 kilos without fuel so here we have a bike which doesn’t weigh much but has stonking grunt. And as we all know, that’s a great recipe for a fast road bike.

Engine
KTM has produced its big capacity V-twins for years now and besides some early teething problems seems to have them really sorted in recent years. Using the old RC8 R engine as the basis, KTM increased capacity to 1301cc. 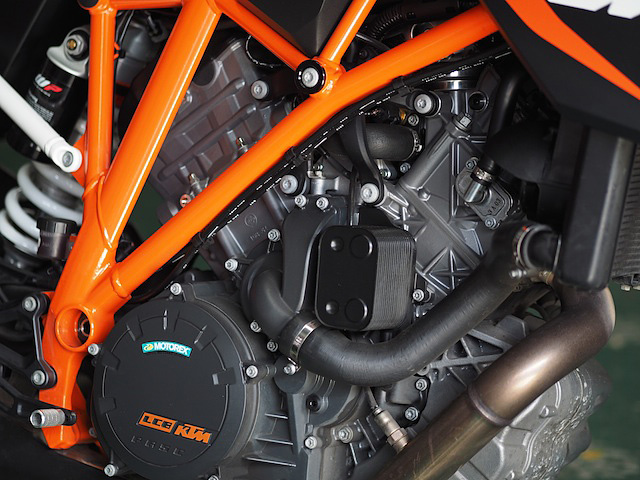 Some of the highlights of the engine include twin spark heads, which is nothing new but does improve power and smoothness, a slipper clutch, 13.2:1 compression (that’s serious), and an electronics package with fly-by-wire, which allows three different riding modes.

You can choose between ‘Rain’, ‘Street’ and ‘Sport’ modes. Both ‘S’ modes give you full power up top, with ‘Street’ a softer initial throttle response. ‘Rain’ limits power to 100hp and a softer throttle response again. Traction Control (MTC) is part of the electronics package, as is ABS. The MTC changes for each riding mode, the sportier mode you select the less MTC input. 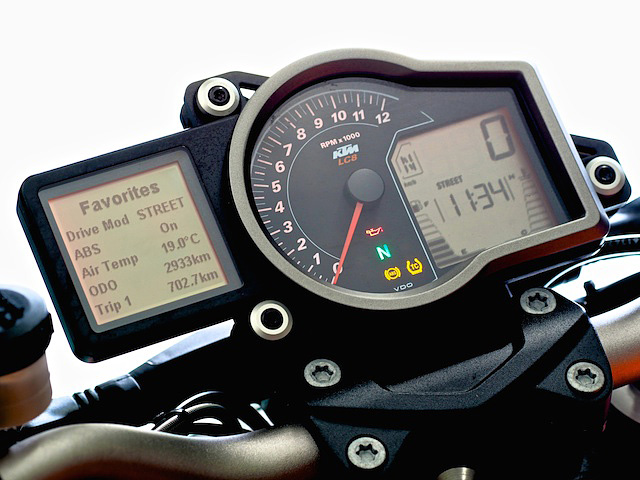 The ABS remains constant in its input through the modes but you can either turn it off or go into ‘Supermoto’ mode which keeps ABS working in the front but not the rear. Basically you can engage ABS on the front while simultaneously locking up the rear as you slide it into a corner. Good luck with that. For the real thrill seekers out there you can also turn off the MTC.

Chassis and ancillaries
I reckon it’s great to see KTM sticking with its tubular steel frame, which is a mix of oval and round chrome-moly thin walled steel, and an alloy bolt on rear subframe. It works and it’s light so there’s never been a need for KTM to go alloy twin spar, which is arguably no better anyway.

KTM owns WP suspension so it’s natural it’s on the Super Duke R. The 48mm forks have separate damping circuits and are fully adjustable. At the rear KTM has gone the single sided swingarm route and it wins plenty of points on looks alone. And the WP shock is fully adjustable also. 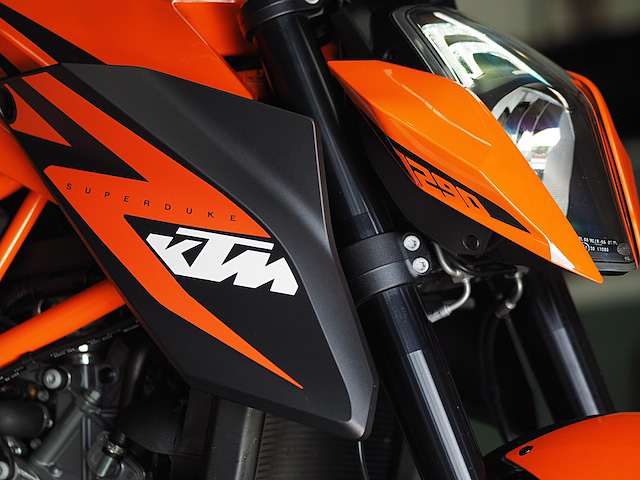 Ride time
The two things which immediately piqued my interest when I first rode the bike were the footpegs which were mounted further back than I expected, and how smooth the engine was as I rode off down the road.

Not long after that I noticed how good the fuelling was. I’d have to say pretty much all KTM V-twins I’ve ridden have suffered from poor fuelling, some worse than others. They were very on/off and bumpy roads exacerbated the problem if you were cruising along. Ride them hard and it was far less of an issue.

Now before KTM lovers crucify me, Cycle Torque did own a 990 Adventure and we all loved it, so I do have some runs on the board here. The 1190 Adventure R I tested was much better than early ones but the new 1290 Super Duke R seems to be better again. Spot on, in fact. 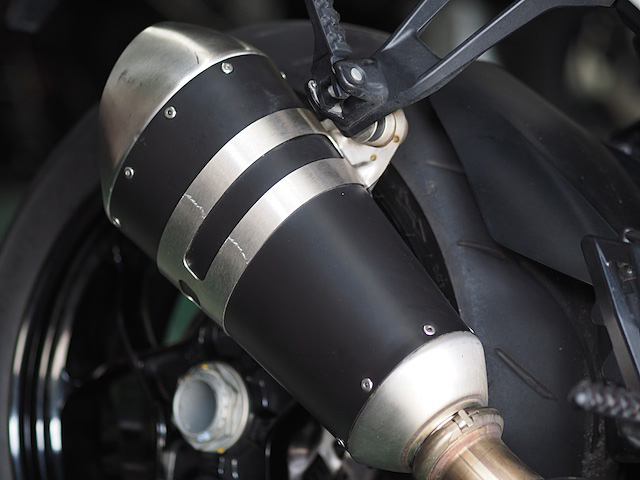 We’ve already ascertained that on paper the beast has lots of horsepower. In real life it feels very strong. Crack this baby open and you are accelerating real fast. It doesn’t feel like sportsbike fast, despite the output claims, but it’s not far behind.

The short wheelbase makes it lots of fun too, with slight bumps in the road lofting the front wheel. Of course there might have been some throttle provocation involved but the 1290 does not mind lofting the front, which is fine by me.

The bike is slightly over-geared I think, with top gear (6th) too tall for sitting on 100 km/h. This is an engine which doesn’t really like to be laboured so I found myself cruising along in 5th mostly. On one long section of twisties I alternated between 3rd and 4th gears most of the time and the engine was real happy.

Despite what I’ve just said, the engine is quite flexible, I just think adding 1-2 teeth on the rear would make it better. I liked the fact you could ride quickly without really trying. Sit in 4th gear, don’t hang off, use the engine braking to slow you down and you will find this bike is quick. The riding position allows you to ride like this very easily. 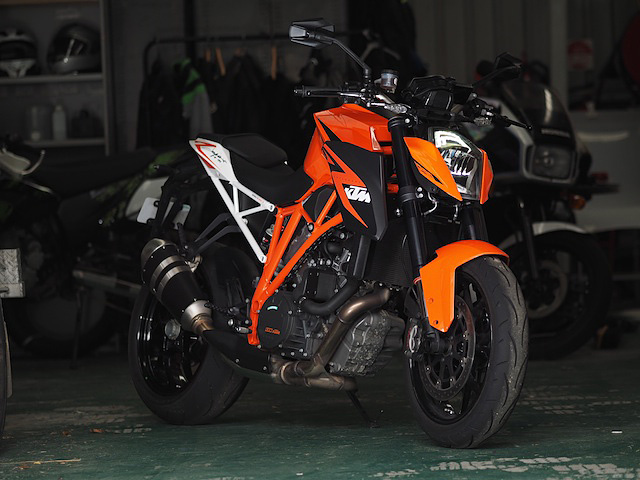 Take it up a notch and it becomes an altogether different animal. Turn the MTC off, start letting the engine rev right out, smash the Brembos late, hang right off and you’ll find the Super Duke R lofting the front out of corners with gay abandon.

Hang on for the ride ’cause this baby likes to run free and hard. It’s rare you can get a bike which has such extreme personalities. You will love commuting on the 1290 because the power is so smooth, the gearbox slick, the riding position comfy and a seat height to suit a wide range of people.

At the other end of the scale the bike can be a real beast and you will love it for that too. 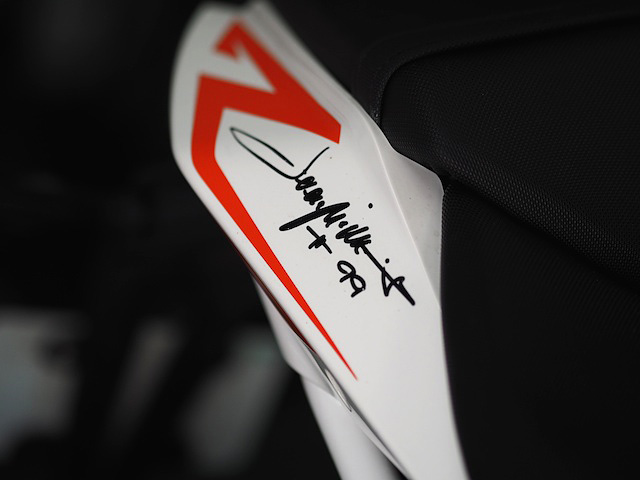 KTM even makes a good range of accessories for the 1290, including some touring kit. The plastic tank is 18 litres and even if ridden spiritedly this will give a range of near 250 kilometres. Not bad for this sort of bike.

Final word
I almost find it hard to believe how good modern bikes are and the 1290 is no exception. In fact it’s brilliant.

$23,500 sounds expensive for a KTM but that’s because most people think dirt bikes when they think KTM. If you’ve never sampled a KTM road bike then try this one. You’ll be blown away.

SUZUKI’S Hayabusa is no doubt one of the world’s most recognisable motorcycles – and for all the right reasons.
[…]