KTM’S 1190 Adventure range is aimed right at the aggressive end of adventure touring. But our report on the launch of the 1190 Adventure a few months ago also highlighted how good the bike is as a road machine too.

Since the inception of the 950 Adventure some years back KTM has usually had an upspec Adventure model for those riders who want to step their touring up a notch., and the ‘R’ is exactly that. 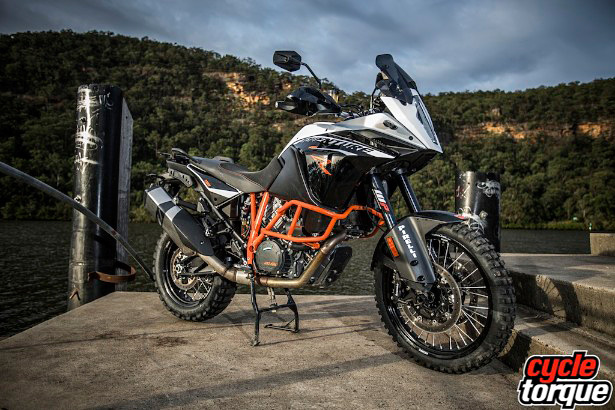 What’s the difference?
The 1190 and 1190 R share the same chassis and motor but there are differences in suspension, wheel sizes and of course the obligatory graphics. Both models have a 17 inch rear wheel, but the ‘R’ has a 21 inch front wheel which allows the use of more aggressive offroad tyres, and helps steering the beast in the rough stuff. 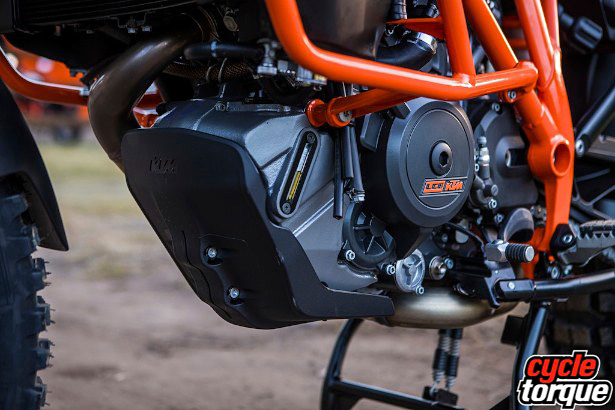 The main differences between the two bikes comes down to 220mm suspension travel for the ‘R’ while the Adventure gets 190mm front and rear.
Weight on the ‘R’ is 217kg (no fuel) compared to 212.
I can only guess the longer suspension uses up the 5kg, as fuel tank capacity is the same at 23 litres. 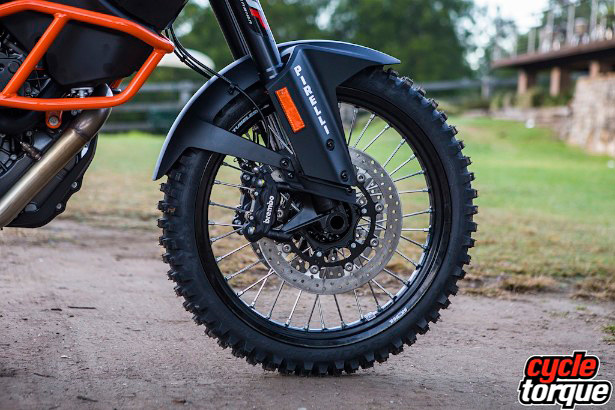 All of these differences come down to the longer travel suspension on the Adventure R. And if you want to get serious offroad you’ll want this extra travel.

Torture test
Our launch route was a pretty serious one, but not really a torturous one. Sounded good though didn’t it? Rarely do we get to test bikes like this on such varied terrain, for such long distances. 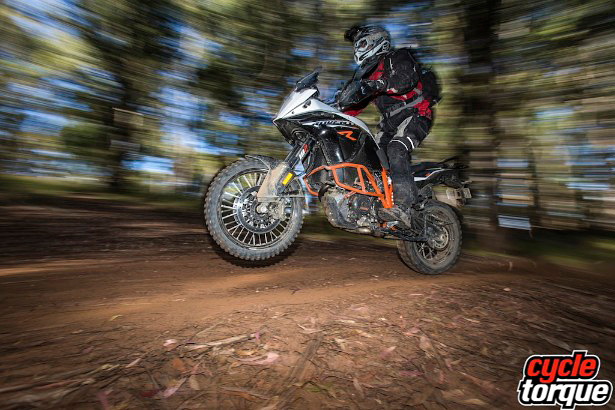 Our bikes were equipped with what most adventure riders would call knobbies. We kicked off from Wisemans Ferry and headed to St Albans, dirt all the way to Wollombi Road and through the back of the Watagan Forest to the sleepy hamlet of Laguna.

There seemed little time to have a coffee as the route consisted of something like 400 kilometres. Doesn’t sound that much but most of it was dirt, and tight dirt at that…

My first impression of the bike was it was very capable but was it a big leap over the previous 990 like everyone was saying. Not so sure about that. But the day raged on and despite a few overcooked corners I got through the next session unscathed.

This is a big bike with lots of horsepower, around 150 in fact. When you give the old throttle a bit of a squirt the corners tend to rush up somewhat fast. 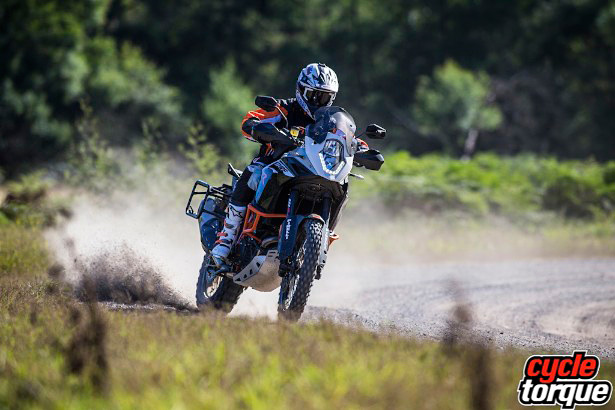 Shortcut Time was an issue so we decided to head from Howes Valley straight up the Putty Road to Singleton. I was amazed how quick I could ride this baby through the tar corners on knobby tyres, and with that sort of horsepower on tap you make quick work of a rear knobby, make no mistake.
Get throttle happy and you will be best friends with your local tyre supplier. Yes sliding the rear is fun but no good for your wallet. 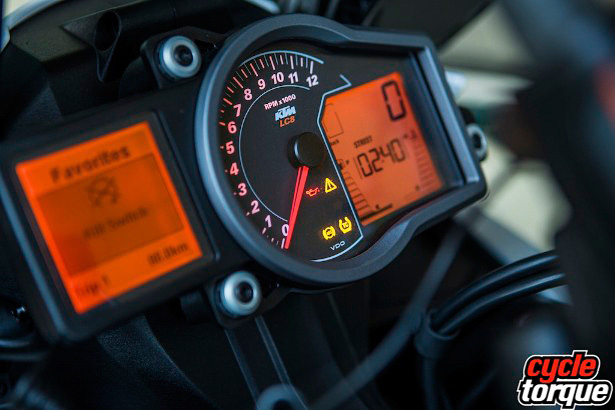 It was on this stretch I really took time to look at some of the info on the instrument panel. As you would expect for a bike like this it has trip meters, gear indicator, ABS and traction control settings, time, what riding mode you’re in etc.
The list goes on but there’s more than enough info if you’re planning an intercontinental trip sometime soon.

I had played around with the Riding Mode settings to see what was what, but until then I had pretty much been in ‘Off-Road’ which limits hp to 100 and minimal traction control.

From there you get ‘Rain’ which gives 100hp and full TC; ‘Road’ with the full 150 ponies and a decent intrusion of TC, while ‘Sport’ gives more power and less TC. 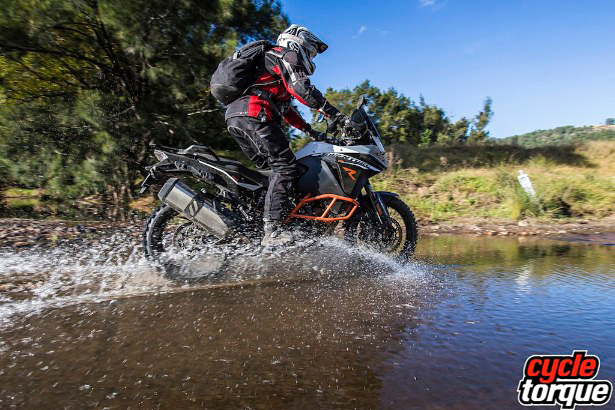 When on the tar for a decent stretch I went with ‘Sport’ which was fun but really only necessary if you are attacking the tar corners or are some sort of Extra Terrestrial in the dirt.
I just cannot imagine any mere mortal rider using all the 150 ponies in the bush. Maybe during the Dakar Rally but phew…

Into the abyss
After a bit of lunch it was into the Mount Royal Ranges near Singleton on our way to Moonan Flat pub for our overnight stay. This covers everything from backroad tar to glorious dirt roads over the tops, and some gnarly uphill stretches. We took the hard way of course.

Everything I threw at the 1190 R it took in its stride, except for some of the erosion banks. After a couple of big bottom-outs I had to remind myself I was on an adventure bike, not a 450 EXC-F. Once I gave myself an uppercut I tended to roll over the jumps rather than loft the front big time. 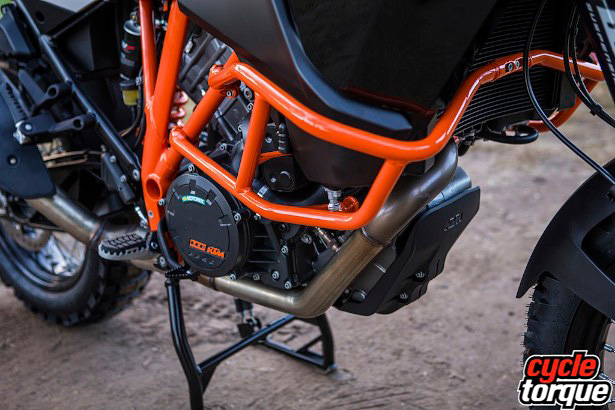 We even got to test the headlight as we rolled into Moonan Flat after dark. The headlight is not as good as some but still very good. Heading back the next day was more of the same and the bike was a delight to ride.

Verdict
I got to test the 1190 R back to back with the outgoing 990 and while the 1190 R is not a stratospheric leap ahead it’s definitely a better bike. The engine is smoother, has more punch of course, handles better and feels more refined. 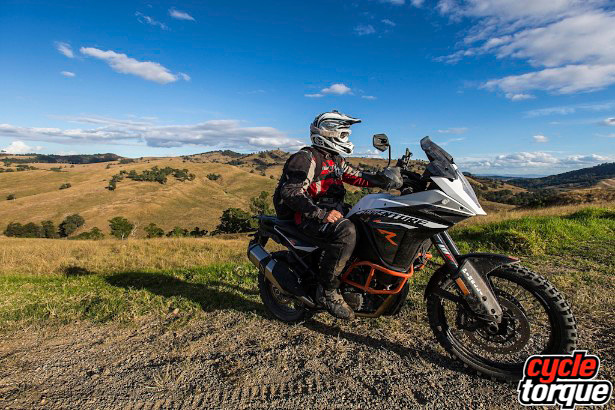 Starting at the base of the iconic Aoraki Mount Cook meant the second annual KTM New Zealand Adventure Rallye: Southern Alps was always going to be a special one. With 112 KTM adventurers from seven […]