The 27-year-old British rider comfortably won both of today’s races at the 4.936km Autodromo Enzo e Dino Ferrari from pole position, setting the fastest lap in each of the two outings. He now leads the championship by four points from fellow Brit Tom Sykes (Kawasaki Racing Team).

Rea got superb starts in both 19-lap races and was never challenged, with Chaz Davies (Ducati Superbike Team) and Sykes joining him on the podium in race one. Davies and Sylvain Guintoli (Aprilia Racing Team) were second and third respectively in the second race.

Jonathan Rea: “It’s been a great weekend for me! I couldn’t have imagined doubling up coming here. But I knew we’d be strong because it’s a circuit I really enjoy and one that the bike goes really well at. To cap it off, it’s also been a perfect weekend for the team with Lorenzo winning his first World Supersport race so massive congratulations to him. Mikey was on the podium and he’s leading the championship, too.

“It’s a shame we have a test tomorrow because I think everybody in the team deserves to go and really enjoy the night and savour this moment but it’s back to work tomorrow! We’ll try to make the bike better and go to Donington hopefully to keep this ball rolling. I’m really enjoying riding right now and I want to thank everyone who’s put the work in. Not just the track staff here but the guys back at base in Nieuwleusen . It’s also the home round for our sponsors, Pata, so a big thanks to them, too.”

Race one – All British podium in the first encounter

From the start it was Pole Position setter Jonathan Rea (Pata Honda World Superbike Team) who immediately took the lead ahead of the Aprilia Racing Team duo of Marco Melandri and Sylvain Guintoli. Chaz Davies (Ducati Racing Team) moved up to second at the end of lap one and as the laps progressed a number of riders in the leading group would run off track in their efforts to keep up with the flying British duo at the front.

By half distance Rea had moved clear of the chasing pack with a lead of almost two seconds. Behind the leader a four rider fight involving Davies, Tom Sykes (Kawasaki Racing Team), Sylvain Guintoli who had worked hard to bridge the gap after an off track excursion at the chicane on lap 2, Loris Baz (Kawasaki Racing Team) and Davide Giugliano (Ducati Superbike Team) became more intense with every corner.

Giugliano slid out of contention on the twelfth lap, the Italian clearly annoyed as the front end of his Ducati went away from him.

At the flag and after 19 exciting laps it was Rea who took back to back wins ahead of Davies and Sykes, who complete the race one podium. The Ulsterman now sit second in the standings, with only ten points to make up from the leader Tom Sykes.

Jonathan Rea once again made the best start as race two, but unlike race one, Sylvain Guintoli and Davide Giugliano) who also started from the front row, made equally impressive starts to ensure that they were in contention from the beginning.

The race two pace was a lot higher than the earlier encounter as Rea lapped at almost lap record pace on his first flying lap.

Reigning champion Tom Sykes started slowly but was soon up to 4th after displacing Marco Melandri (Aprilia Racing Team) who in turn had moved ahead of race one podium finisher Chaz Davies (Ducati Superbike Team).

As the race progressed and with Rea out in front by over 5 seconds, Davies and Guintoli together with Sykes and his fellow Kawasaki rider Loris Baz, were involved in an intense battle which raged until the final lap.

At the flag Rea took a double victory ahead of Davies, who clung on to his second podium of the day and Guintoli who fought hard to finish third. 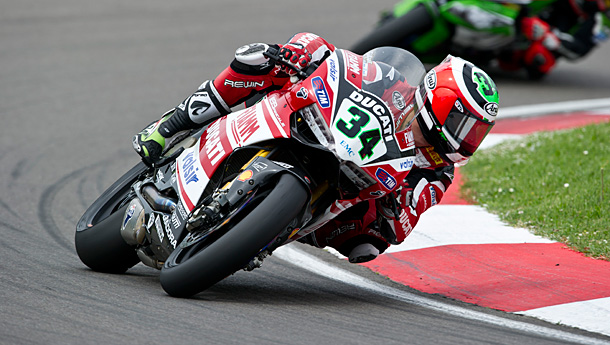 Loris Baz got the better of his team-mate Tom Sykes to claim fourth, with Davide Giugliano (above) putting the disappointment of his race one crash behind him with a solid 6th.

Niccolo Canepa had a technical failure in the closing laps as it looked certain that he was heading to the best classified award in the EVO category. His retirement handed that accolade once again to Leon Camier (BMW Motorrad Italia).

Taking the lead on lap two, former champion Kenan Sofuoglu (Mahi Team India Kawasaki) was kept under constant pressure for the whole race by Lorenzo Zanetti who was racing with a new helmet design in memory of the late Ayrton Senna before the Turk retired with four laps to go leaving Zanetti to take an incredible victory in his home race.

Pole Position rider Jules Cluzel (MV Agusta RC – Yakhnich Motorsport) lost any hope of a podium finish after running off track on lap 6 and again on lap 8. The Frenchman was able to rejoin to finish the race in 15th.

Alex Baldolini (ATK Racing MV Agusta) had to start at the back of the grid after a technical problem prevented the Italian from setting a time in qualifying. Crashing on the opening lap, he remounted before eventually retiring.

SADLY, it’s time to sell our beloved Multistrada 1200 and move on to another project for Cycle Torque Magazine. It was purchased new in late 2011 and is a 1200 S Touring. That means it […]