AFTER the launch of the machines recently though, I believe the team at Indian are here to evoke the machines of Indian, with a modern slant, of course, while building a premium brand of cruiser motorcycles – taking on Harley-Davidson at its own game. 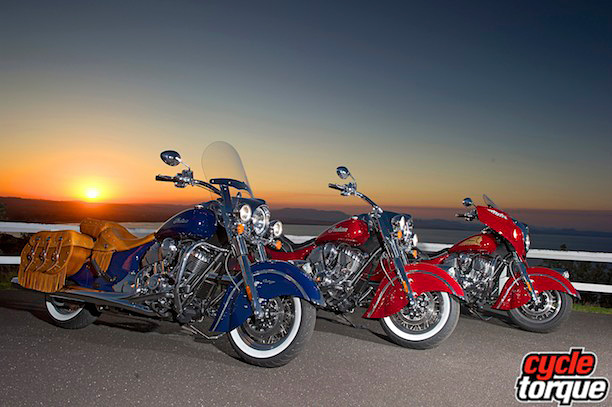 From the heavily valanced fenders (guards) to the new Thunderstroke motor designed to replicate the Indian motors of the 1940s to the art-deco styling, it’s possible, if you squint hard, to believe the three new models introduced this year would be the bikes Indian would still be producing if it had survived past 1953.

The team
Indian Motorcycles is owned by Polaris Industries, one of America’s largest manufacturers of motorised vehicles – everything from farm quads to the Victory Vision, a full-dress touring motorcycle.

Less than three years ago Polaris assembled a team of engineers and designers to create a premium brand of American motorcycles, bringing back the Indian name at the same time. 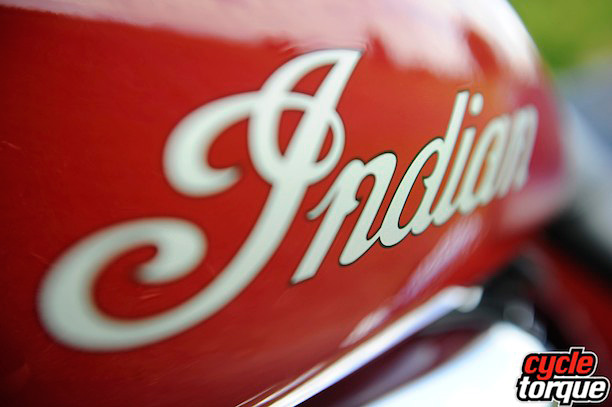 The team looked to the past for inspiration while employing the latest technologies to ensure the new bikes would be everything modern riders expected and need – ABS, modern suspension, good handling and 21st-century performance – while having the retro styling reminiscent of 1940s Indians.

Introduced with a worldwide simultaneous launch to thousands of motorcyclists keen to see the next chapter in American motorcycling, Indian has been re-born and the new bikes are very, very good.

The powerplant
Named the Thunderstroke 111, Indian’s first new motor in many decades is a pearler. Indian doesn’t publish a horsepower figure, but its torque output of 138.9Nm (102.4ft-lb) is impressive and that translate to effortless riding on the road, with brisk acceleration and easy overtaking.

The “111” refers to the capacity, in cubic inches – 1818cc, so we’re immediately into heavyweight territory. Indian’s heritage is here. 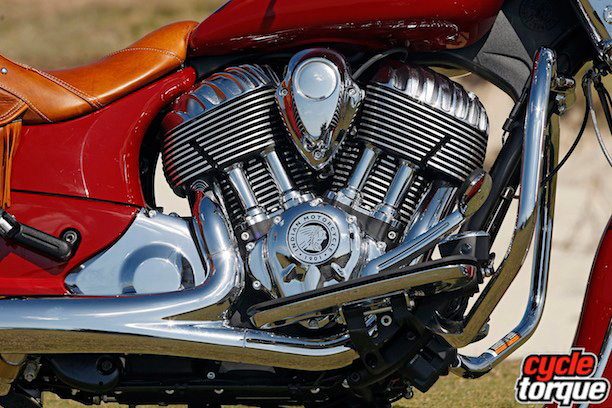 The engine finning, the downward facing exhaust tube, the shape of the rocker covers – all reminiscent of 1940s Indians. That torque is delivered by a four-stroke V-twin, air cooled and fuel injected engine.

Maximum torque is delivered at 2600rpm, and passes from the engine through a wet multi-plate clutch to a six-speed gearbox. The Thunderstroke motor produces enough vibes to let you know there’s a large-capacity twin between your legs, but is remarkably smooth on the highway. 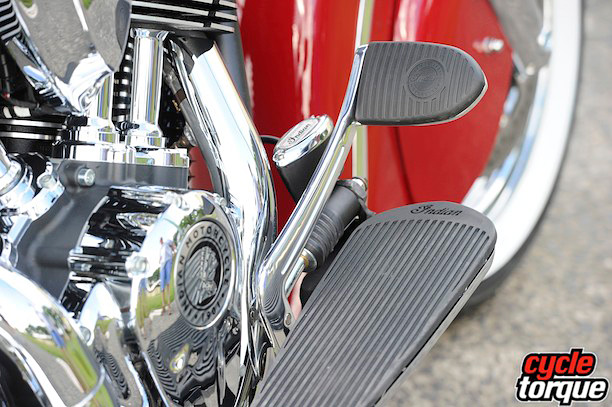 Through the foot boards there’s a consistent reminder you’re on a V-twin, but few other vibes. It makes for a relaxing ride. The transmission is slick – most twins pushing the two-litre boundary have clunky, slow-moving transmissions – not the Thunderstroke. It’s pretty slick… not in the category of four or six cylinder bikes, but among the best on a twin.

All three 2014 models have footboards and toe-only gear change – no heel change.
Belt final drive is a feature of all 2014 Indian machines.

Common features
As you’d expect for a new range of machines, the three Indian motorcycles being introduced share many common features. There’s a cast aluminium chassis with integrated air box, designed to keep the heavyweight machines in line and handling like they should – no flex or weave here. 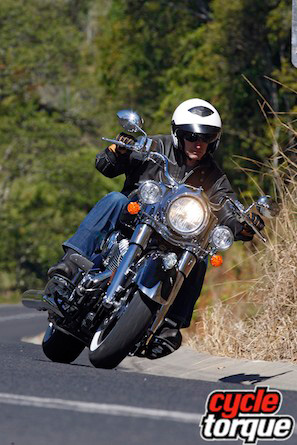 Things like the leather is worth a special mention – it’s being supplied by the same manufacturer which supplied the old Spingfield-based Indian Motorcycle Company back in the day, and is now supplying the re-born Indian with luxurious, thick, soft treated leather, which is beautiful to look at and gloriously soft to touch.
All the bike’s seats are leather and very well padded too, so are very comfortable, short ride or long.

Each bike is available in Thunder Black, Springfield Blue and Indian Red.

With its beautiful badging and 1940s styling, this bike will fool the uneducated into thinking it’s a classic machine. The handlebars are swept back, the footboards pushed forward – which results in an upright riding position, up in the breeze and well suited to cruising.

The Classic exists as an entry-level machine to the Indian range, or for those who really don’t want or need luggage carrying capabilities, but its lack of weather protection and upright riding position make it tiring to ride at highway speeds. 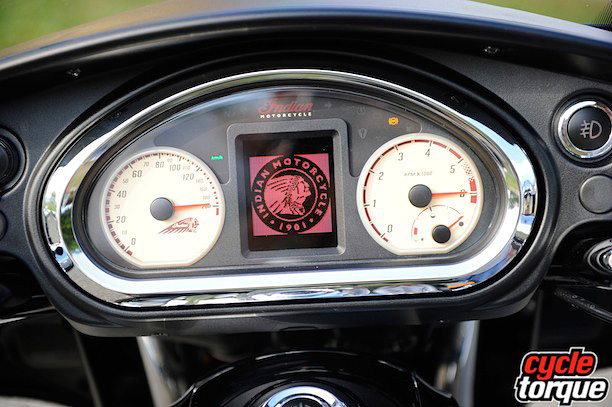 The Chief
Vintage Leather bags and a touring screen are the big features of the Vintage over the Classic, but there are a number of less obvious features which make the bike unique.

There’s the raised badging, in the classic Indian script. There’s the whitewall tyres, evoking a period long past. But the big features are the leather-wrapped quick-release saddlebags and quick-release touring screen. 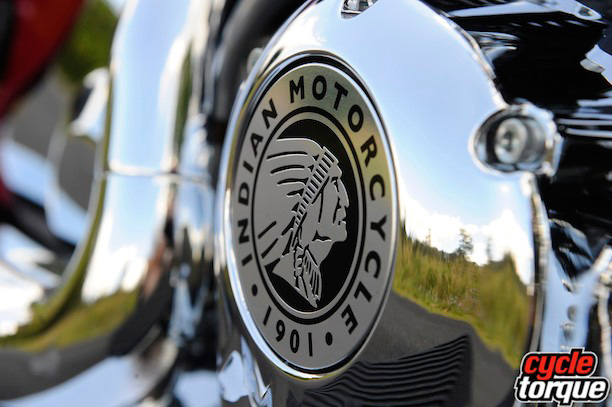 Being able to go from naked to Bagger to touring in minutes adds to the style and versatility of the Vintage. The bags aren’t huge, but swallow enough for a weekend trip easily. They have modern plastic clips hiding behind the leather buckle straps, so they are quick to use, too.

The screen is large and protective, so tall you look through, rather than over. 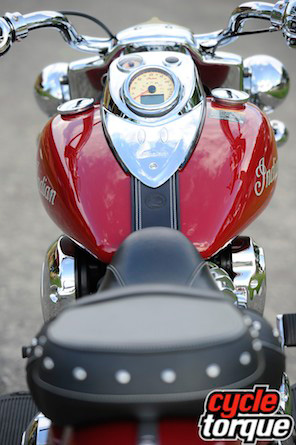 The Chieftain
At the touring end of the market the Chieftain lies; its integrated panniers and handlebar-mounted fairing providing the capacity and comfort for eating big miles.

Under the electronically height adjustable screen are a classic-styled speedo and tacho, but between them is a modern digital display which showed the data from my phone, once the standard bluetooth pairing had been established.

I listened to Amy Winehouse singing about how she wasn’t going to drink anymore as I soaked up the sights, smells and sounds of Northeast NSW, enjoying the beat of the Thunderstroke motor in conjunction with Winehouse’s Blues.

At $35,995 the Chieftain doesn’t come cheap, but it does come well equipped.

Beautifully finished and capable of taking two people on a comfortable long tour, the Chieftain should become a popular machine with the touring set.

Handling and performance With all three Indian machines running the same engine, transmission, fuel injection and final drive, you’d expect performance to be similar across the range, and it is.

Acceleration, braking and handling were all good, the fat front forks and rear suspension working very well at controlling the powerful motor while letting the rider throw the machine around better than expected – I suspect the aluminium frame has something to do with this, preventing any twists in the chassis from upsetting the handling. 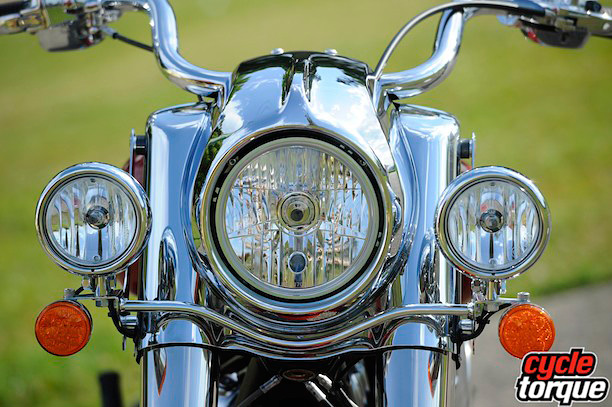 All three bikes have forward-set footboards, but the cornering clearance was pretty good – and I suspect this is why we don’t have heel changing, for the linkages which often run under footboards are also often the first thing to scrape.

The boards will scrape with a bit of keen riding, but not dangerously or very early.

Instant Classics?
The new Indian machines represent a real reinvention of a classic marque. They are modern, beautiful and very well made. They do everything you’d demand of cruiser/touring machines without some of the compromises you might expect.

Priced at the premium end of the market, they won’t be for everyone, but that’s OK too: it’s hardly unique if everyone has one. For those lucky enough to be able to afford one and actually find a dealer with stock to sell you (they will be in short supply for a while), you’ll be rewarded with a nice ride, plenty of attention when parked and something very, very different.

AH, THE seventies! It was an era of innocence – of choppers and ape-hangers; of Stone, On Any Sunday and Easy Rider. […]