NORMALLY a rider of my demographic would probably be more interested in a sporty LAMS bike than an adventure tourer based one. Is it so much about style at my age (20) than it is about the bike’s actual ability? I guess it is for many.

I think if you can look past pure style then you would open yourself up to the wonders of adventure riding. The CB500X isn’t the best LAMS adventure tourer I’ve ridden because it’s more aimed at road riding, but it is a very good machine if you want to check out dirt roads and go places you would usually shy away from on a sports styled LAMS. 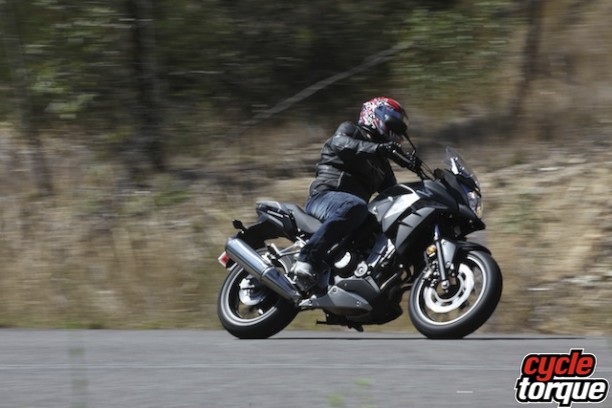 Behind the brochure
There are three 500cc twins using basically the same platform, the sporty CBR500R, the naked CB500F and the ‘X’ we are testing here. On the CB500X you get ABS standard, and the price is $7490.

I think this is a bargain for something you can ride around Australia, and take in some out of the way places along the way.

When it comes to the adventure side of things there are some limitations on just how adventurous you want to get. With alloy wheels and ABS which can’t be switched off you will need to take things relatively easy on the dirt. And with 17 inch wheels at both ends you are limited as to how aggressive a tyre you can fit.

Comparing the bike against the other two in the model range you will see the suspension on the CB500X has longer travel all round and the styling is obviously different.

I like the styling, and the riding position is almost perfect for the bike’s intended role of commuter/road/adventure tourer. I think the buyer base will be riders looking for a road/commuter bike with some aspirations of checking out the countryside.

Like lots of bikes, you can ride the CB500X in areas you wouldn’t normally think they could go, as long as you ride to the bike’s limits and go easy when you need to. 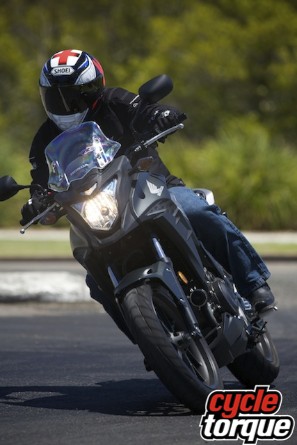 The CB500X is more adept in such situations because of its longer travel suspension and extra ground clearance. Up front the 41mm forks have 122mm of travel while the rear Pro-Link affair has 118mm travel. The bike doesn’t cost much and as a result the suspension is basically non-adjustable except for the rear shock’s pre-load.

Brakes are basic too, with a single disc on the front and a 2-piston caliper. But the bike doesn’t weigh too much (195kg ready to ride) and isn’t overly taxed by the minimalist brake package. I gave it a good going through some bends and found the brakes fine, so they can handle a good thrashing if need be.

The 471cc parallel twin engine has a 180 degree firing order and a counterbalancer, which reduces vibration, and it’s all modern with fuel injection, not some rehashed 500 twin design from 20 years ago.

There are some minor differences in this engine compared to the other two CB models I talked about earlier, and this is mainly to change the power delivery to suit the bike’s application.

Honda says it has a different head but this is more likely some porting and compression changes and maybe some slightly different cam timing. All up, power is around 50hp. Made to ride Straight up it’s a very comfortable bike.

The seat does get a bit hard after a full day on the road but overall the riding position invites long distance road burning. Even standing up for some dirt road work is easy transition wise, and the bike’s handlebars are high enough to do some serious dirt road miles if you wanted to.
I’d fit handlebars maybe an inch higher if I was doing that but for general road riding with the odd dirt adventure they are spot on. 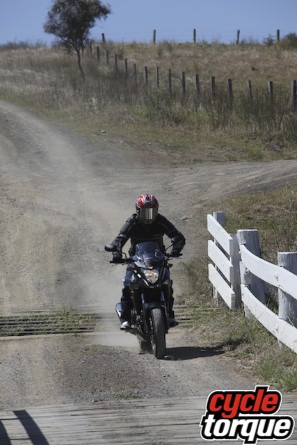 You get some decent wind protection from the standard screen and the LCD digital instruments are easy enough to read and have enough information to suit most riders.

Power wise the CB500X is no arm puller but the combination of under 200 kilos and 50 ponies make it quick enough for most learner riders I would think.

The engine is flexible but it also likes to rev. For a 500 twin I reckon it goes well and on tight roads you could keep up with much faster bikes, especially on questionable surfaces. But that’s not what the bike is about. If you wanted to find it, top speed would be close to 160km/h.

The true beauty of this bike lies in its ability to cope with some very poor roads and keeps the rider somewhat insulated from the bumps. This same plushness in the suspension does make things interesting if you are riding it quickly in the bends.
There is some vagueness from the front end when cranking it over which is due to the suspension travel and softness of the fork springs.

The very thing which makes it so nice in one area detracts from it in another. But this is a minor thing, Honda has got the bike right with its overall set-up. You can always buy the CBR500R for that sort of riding.

Fuel economy is great, returning around 3.5 lt/100km, and with the 17.3 litre tank you could theoretically get around 450 kilometres.

You can get a number of genuine accessories for the CB500X too, like the 35 litre top box. Fit that, some decent adventure touring tyres, some throw-over saddlebags, handguards, taller screen and some heated grips and you are ready to go just about anywhere.

Overall I think this is a great bike. It’s cheap to buy, run and maintain, looks great, can take you many places and is fun to ride.

Whether you are a learner or not, you’d have to be happy with the CB500X. It can give you life in the fast lane if you so wish but it shows you can still have lots of fun in the slow lane along the way.