The cafe racer set should excited, for there’s a new bike in town, and it’s cool, stylish and capable. And it’s a Harley. 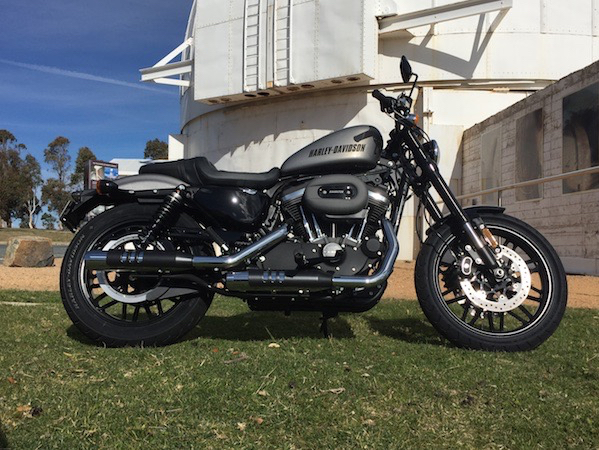 The new Roadster isn’t a sportsbike in the modern sense, but it is fun in the twisties and offers a ‘good fun’ level of performance.

For decades riders have been putting huge efforts into making Sportsters, well, sporty. Switching out too-soft front ends, upgrading non-adjustable shocks, reducing weight and increasing performance, the Cafe Racer set has always had a love-hate relationship with the Sportster – loving its style and feel, hating its performance and handling.

Harley’s trying to fix that with the Roadster.

With probably the best set of forks ever fitted to a stock Harley, a modern twin-disc front brake set-up and handlebars which encourage spirited riding, Harley’s got much of the formula right.

The engine hasn’t received the same treatment though, it’s the same 1200cc V-Twin we’ve been thrashing for a while now, and in the upgraded chassis and running gear it feels even slower, although there’s plenty of scope for improvement. There’s a new exhaust coming which will help it breath and make it sound like it should, and there’s a plethora of other options to extract more performance from the air-cooled 45-degree V-Twin, including a $3000 Screamin’ Eagle performance kit which includes barrels, heads and cams.

The Sportster is a 16.5 model, that is a late release for the year – the company is making a bit of habit of this, releasing a few new bikes mid-cycle to keep us on our toes.

Priced at under 20K, the Roadster probably offers more fun per dollar than any other Harley. It’s a lot more fun and far more capable than any other Sportster, and actually shouldn’t crib sales from other models too badly – nothing else in the range really comes close.

Indeed, Harley hopes to attract riders who previously wouldn’t have considered a machine from America’s dominant motorcycle manufacturer, and the marketing is aimed at younger riders – those in their 20s.

A little surprisingly the Roadster runs a 19-inch from wheel, a more traditional sporting size rather than the 17-inch sporting rubber on nearly every other brand of bike since the 1980s.

The tall wheel with skinny tyre was definitely the right choice. Sure, a smaller wheel might give sharper steering, but the Roadster isn’t aimed at racetracks, it’s aimed at twisty coast roads and Californian Canyons, where stability and predictability are more important than flickability.

The stability’s not helped by the underdamped shocks, which rebound hard off bumpy roads, threatening to push you out of the seat… but even so, part of the problem is the well-planted front end, which is encouraging riding harder, which taxes the rear shocks more…

The changes have increased cornering clearance, but not enough. The footpads themselves stick out a long way and are positioned perfectly to damage shins when your feet are down. On the move though the pegs feel good, not too high and not too low – but they might feel a little too far forward for some.

Harley’s brakes have never been cutting edge, but those fitted to the Roadster have stepped it up a notch. Twin discs mean you can brake later than ever, although temper this with know this is no lightweight cafe racer – if you want one of those, take a Yamaha SR400 and thrown a few grand at it.

Nope, the Roadster is a serious motorcycle, and a fun one at that. It’s part of the Harley-Davidson Dark Custom range, and really that’s a starting point for you to build the perfect machine for you – one which reflects your style and personality.
Harley has a range of options and accessories available from the get-go for the Roadster to turn it from their bike into your bike, and there’s a new range of riding gear to go with it all too.

Now, at last, Harley has a bike which suits the Cafe Racer builder, a bike which is great fun out of the crate and with careful personalisation, a fine cafe racer.

The much-rumored Street 500 Harley-Davidson has been unveiled to the world motorcycling press, with events running around the world to introduce the new bike, and it’s 750cc variant, today. Priced at around $10-12,000, the XG500 […]