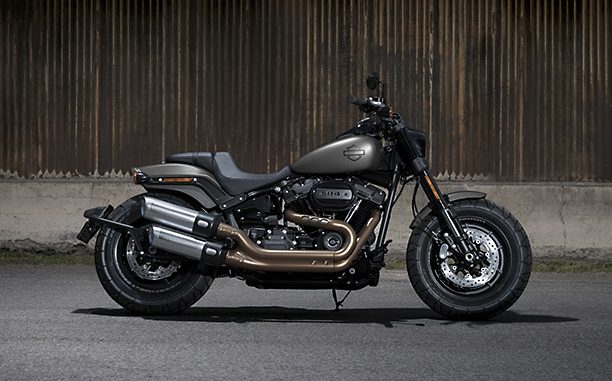 Well, that’s what Harley has done (and they’ve copped plenty of flak for it online), with eight new Softails coming our way in 2018, the new models will merge Dyna performance with the Softail’s iconic looks.

The new bikes will feature a stiffer and lighter frame, built to cope with the increased torque of the dual-counterbalanced Milwaukee-Eight 107 and 114 engines.

There’s suspension updates to both ends, with the Dyna twin-shock set-up losing a spring and somewhat more importantly, opting for the hidden, Softail look.

The front forks are set to receive dual-bending valve forks which Harley used on its Touring line in 2017.

Brad Richards, Harley’s VP of styling and design said “we look at every nut and bolt on the bike.”

“Its design speaks to the teamwork that our styling and engineering processes demand.”

Only the Wide Glide has been dropped from the former Dyna range.

Harley has designed two new swingarms for narrow and wide rear tyre sizes, both are lighter which will improve unsprung weight.

All-up the bikes are claimed to weigh up to 17kg less than previous models.

Some models will receive new tyres specifically designed to work with the Softail chassis too.

The Milwaukee-Eight engine was first seen on Harley-Davidson’s 2017 Touring line-up, an eight-valve motor which retained the iconic 45-degree V-Twin configuration.

Milwaukee-Eight engines for the Softail will also be smoother –  a dual internal counter-balancing system reduces engine vibration while maintaining the familiar Harley-Davidson feel, so the Harley-Davidson ‘potato’ note comes through with less vibration and noise.

But that’s not all…

The direction Harley is taking with the 2018 Street Glide and Road Glide making one standard with chrome, and a blacked-out ‘Special’

Both Specials are powered by Milwaukee-Eight 107 engines.

But if you want your Glide with more power, and more special, the CVO machines are where it’s at.

The 2018 Road Street Glide and Road Glide CVOs will be powered by the 117-inch Milwaukee-eight variant, there’s extra speakers in the saddlebags and lower-fairing, and CVO paint schemes.

The CVO Road Glide will get a 21-inch front wheel and custom wheels.

Harley will also produce a CVO Limited – the king and queen tourer based on the Ultra.

The two-up seat is suspended and heated with a custom seat cover, insert and stitching is unique to the CVO.

The CVO Limited is topped off with a power-locking key fob and two colour options.