HARLEY-DAVIDSON’S Iron 883 is very much a surprise packet.
Even though the 883cc V-twin engine takes up a chunk of real estate, the bike as a whole is low and lean. However, this ‘smallness’ hides a riding position which caters for people of all sizes. 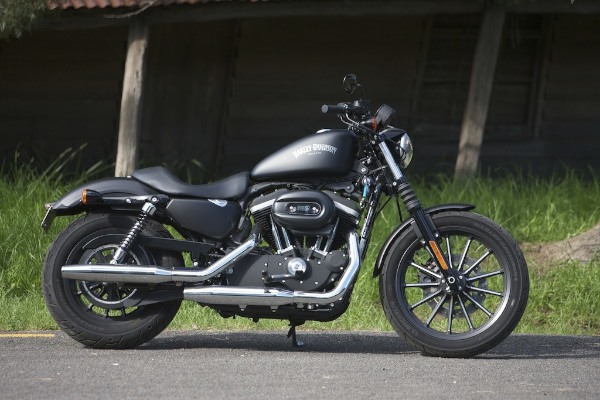 On the stand
On visual stimulation alone it’s hard not to like this bike. The lines are ‘right’ and it just looks cool.
On top of that the engine has that lovely note we all expect from H-D twins.

The basic design has been around for a while now, but it’s little touches like the stop lights being part of the indicators that do it for me.
Even though it’s not a big bike as such it still weighs in at 260kgs ready to ride.

There’s lots of heavy bits and pieces on the bike I guess. But it’s not meant to be a race bike so who cares. It’s got a small 12.5 litre peanut style tank so getting 300 kilometres or so fuel range is out of the question, but over 200 is no problemo.

The 883cc Evolution engine has its roots way back to the mid ’80s, and it’s air-cooled. With pushrod valve actuation it’s simplicity at its best, but it’s fuel injected.
A six-speed gearbox and reliable and clean belt drive system finish up the drivetrain. 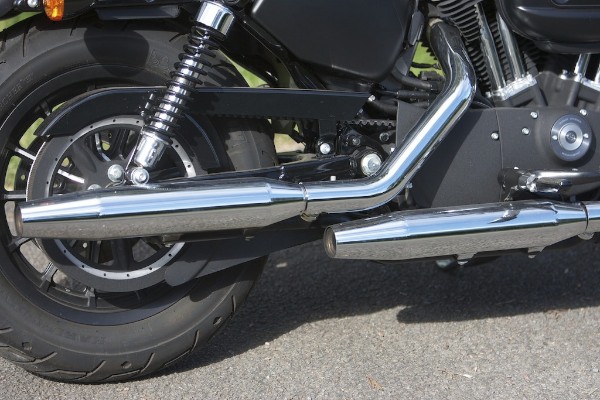 Because the bike sits quite low the suspension doesn’t have lots of travel. Twin rear shocks have minimal adjustment and the forks look as though they are about to bottom out just sitting there.
It’s hard to criticise the bike for that because it’s aimed at a fairly wide range of riders, including ones with a short inside leg measurement.
It says a lot when I, at six foot, can be comfortable on the bike, but so can Dennis Penzo, our advertising manager, who is a scant 5’2″.
Our weights differ greatly too, so good job by H-D I reckon.

Minimalist is a great word to describe the Iron 883, and there’s not much in front of you when you are at the helm, with only the centrally mounted speedo sitting high and proud.

On the road
About an hour after the bike was delivered I speared into town to visit a mate at a custom bike shop. Cranking into the first roundabout had the hero knobs grinding away but my first overwhelming thought of the bike was how easy it was to ride and tip into that roundabout.

When you ride motorcycles for a living it’s easy to get a bit jaded when riding them but the Iron 883 gave me a huge smile, and that’s what it’s about.
As I said earlier there’s quite a bit of room for bigger riders, and the handlebar/seat/footpeg ratio is sweet. There’s lots of cruisers which aren’t as nice to ride as the Iron 883. 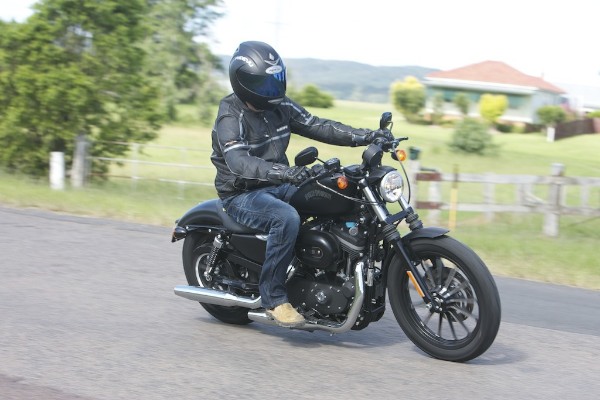 The other thing which burned into my senses quickly was the lack of front suspension travel, with the forks bottoming out over a speed bump.
To be fair I did hit it a bit quicker than I anticipated but it’s something which could be better, although once again, as I said earlier the reason is it’s built to be low so… It’s not just a town squirter.

I live one hour away from the office in small village, where road conditions could be better. Riding the bike home and back to work was simply enlightening.
Cruising along at the speed limit, checking out the fields and farms was part of the fun. I think most riders would be well happy with the performance of the 883, but you can bolt on 1200cc kits if you feel it’s necessary. Not me, I’d be happy the way it is.

Remember those hero knobs which hit the deck easily? Well, they were ditched early on and the bike is then transformed in the cornering department.
I found the shocks to be quite good damping wise, and with some work on the forks you could make this jigger absolutely hum in the corners. 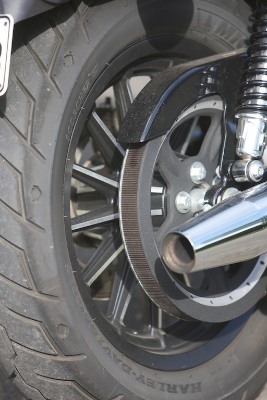 This particular bike is now Cycle Torque’s new long term road burner. Initially I had visions of doing a flat tracker style but I think H-D’s XR1200 is better suited to that.
Personally the XR750 flat tracker is one of the best looking motorcycles ever made but it will be hard turning the 883 into something like that.

We are thinking a hot metalflake paint job though, still incorporating some of the original flat black, some trick pipes we have lined up (a lot different from the standard ones which I don’t particularly like the look of), suspension work, and possibly if we can be talked into it some performance mods.
Like I said before I don’t think it needs it but…

Verdict
I’m a big fan of this bike, and will be even more so when it’s customised. To put it bluntly I think many H-D riders would label the Iron 883 a girl’s bike but that’s way off the mark I can tell you that.

At $14,250 it’s well priced, especially when it looks so cool straight out of the crate.

K&N has developed a replacement air filter for Harley-Davidson’s new 2015 XG500 Street. It is designed to fit into the stock air filter box without any need for modifications. K&N’s washable and re-usable high-flow air […]