Twice Australian Superbike champion, Sydney’s Glenn Allerton, has been called up to replace injured BMW rider Frenchman Sylvain Barrier, and will campaign the EVO spec BMW S1000 RR in this weekend’s (Feb 21-23) opening round of the Superbike World Championship at Australia’s Phillip Island.

Riding for the BMW Motorrad Italia Superbike team, Allerton will be Australia’s only representative in the world superbike category, the premier category of the three-day event. BMW Italia will be running to the new EVO spec, featuring the full superbike chassis fitted with superstock-spec engines, with the WSBK sub- class debuting at Phillip Island. 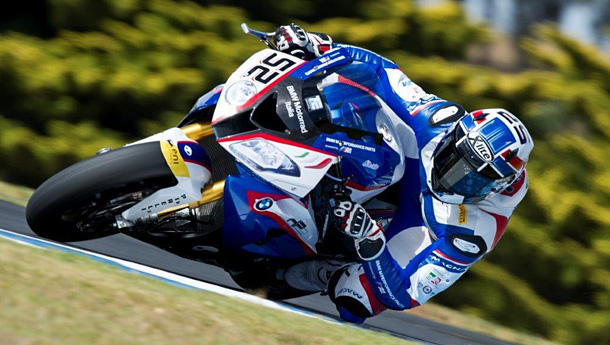 The squad were quick to recruit the local champion when it was clear Barrier (pictured above), who crashed in testing Monday and suffered a fracture pelvis, would be unfit to ride.

“I am excited about the opportunity and am thankful for BMW Australia and Italy for giving me the call,” said 33 year old Allerton, who hails from Douglas Park on the south west outskirts of Sydney.

“I think I can be a reliable sub. I know Phillip Island backwards, it is my home track, and I’d like to think I can race well, get some points on the board, while giving the squad as much data as possible to help in their development.”

Last year, Allerton’s Australian squad, Next Gen Motorsports, campaigned a wild card in the opening round of world superbikes at Phillip Island and put in a creditable performance to finish 14th and 12th. They also competed in the world superbike round in Laguna Seca in California last September.

Locally, Allerton finished 2nd in the Australian superbike championship in 2013, behind Wayne Maxwell.

Allerton will be on track Friday morning, with first wsbk practice scheduled for 11.45am before the first qualifying session at 3.30pm. With a 25 strong field of the world’s best production bike riders, he will compete in two 22 lap world superbike races on Sunday, scheduled for noon and 2.40pm.

The battle for the ultimate prize in world superbike is still open after a resounding double victory to Tom Sykes (Kawasaki Racing Team) at the penultimate round at France’s Magny Cours this weekend. […]