Ducati’s Diavel Titanium is big, tough and intimidating – to look at, at least.  With its long wheelbase, tight, chiseled rear-end, single-sided swingarm, minimalist instruments, a chest beating lateral radiator section and beefed up tank, it makes the Diavel Titanium look like a brahma bull, ready to buck you off without a moment’s notice.

This is the version Ducati promised us some time back, a limited edition run of 500 machines dressed up in titanium and carbon fibre, but still with the polarizing style, because it occupies a weird, wide and wonderful space between sportsbikes and cruisers.

Before I had even thrown a leg over it, I have to admit, even I was still unsure. But let me be the first to tell you how it blew my mind. 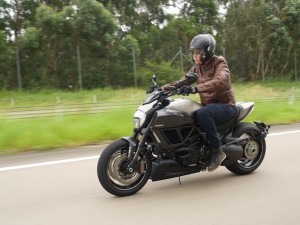 You just have to examine the finishing touches and materials to see why the Diavel Titanium is an exclusive motorcycle. The tank is covered in satin-etched titanium, as is the headlight cover and seat cowl. The cowl has also been finished with carbon fibre, perfecting the Diavel’s exotic look that for most people is either motorcycle porn or auto-erotic asphyxiation. Carbon has also been used for the air intakes, radiator covers, windscreen, mudguards, front sprocket cover and it surrounds the tank cap. Weight has also been shed with premium Marchesini lightweight forged alloy wheels. The Alacantara (Italian synthetic suede) and leather seat is a hand-stitched work of art and just in case you forget, there is a machined aluminium plaque on the tank reminding you there are only 499 other lucky bastards in the world who own one.

Even though Ducati have said in the past the Diavel isn’t a cruiser, most of the styling cues are taken from that world, but the engineers have incorporated a few sportsbike Easter eggs in the Diavel’s design besides that whopper engine. Both upside down forks and rear Sachs monoshock are fully-adjustable units, there’s a Ride-by-Wire throttle for critical right hand response and it also features a slipper clutch, which is obviously needed to tame the motor somewhat and keep the rear wheel rolling whilst banging down through the gears. Both technologies are predominantly sportsbike through and through. The same goes with the Ducati Safety Pack, which provides eight levels of ABS and traction control which can be customised in each rider mode. The work of art more commonly known as a seat also wouldn’t be out of place on a sportsbike because it firmly plants the rider into the bike and doesn’t allow for much movement when you lock in. If only it had the 1299 Panigale’s quickshifter for clutchless up and downshifts, this machine would go from standout street-muscle to complete and utter beast. 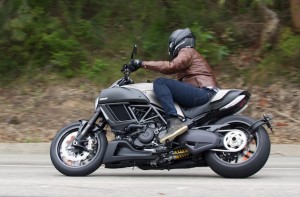 As I said earlier, the Diavel Titanium is an intimidating bike to look at and for about five minutes, it’s an intimidating bike to ride. After that, I completely got what the Diavel is about. Short shifts. Starting out in 100hp urban mode, the bottom-end torque of the 1198cc engine feels like it could almost pull the handlebars from your hands in each gear. The amount of grunt this bike gives you in low revs is exceptional. Ducati has made a few changes from the Testastretta engine in the Panigale to suit the Diavel’s ethos. The intake and exhaust ports have been redesigned along with a large adjustment to the cam timing, reducing the amount of valve overlap from 41 to 11 degrees. This is why the Diavel is so torquey in lower revs. Using that stonk in each gear is addictive. Touring and Sport modes increase the power to 162hp. Both modes feel like they provide slightly more torque off the bottom but it is available throughout the rev range, where peak torque is at 8000rpm and power at 9250rpm.

There is the perception the Diavel feels like it has one object in sight, the horizon. Its goal is to get you there as soon as possible, and this certainly makes it an exhilarating motorcycle, but there’s more to it. Despite its size and bad boy looks, the Diavel Titanium is a comfortable and confidence inspiring machine. The ‘bars are wide and accommodating; there’s plenty of room from the seat to ‘pegs allowing the rider to sit upright and let their arms relax and control the motorcycle. The perch is extremely plush and has to be one of the most comfortable seats I’ve sampled, plus the cowl can be removed to carry a pillion. The dual-instrument cluster is comprehensive, telling you everything you need to know in a layout that provides more information than most others. The LED lights have great form, but they also have superior function – bright and well integrated into the rear cowl, providing wide visibility at the front. Even a simple thing like keyless ignition gives you more comfort. It might not seem like much, but the combination of these factors mean you spend less time worrying about other things, allowing you to relax and enjoy yourself more.

People think there must be a catch with the Diavel Titanium – it’s a bike that takes a lot of cruiser cues, has standout straight-line performance and also offers plenty of rider comfort. It must suffer from poor handling? Well, let me tell you, it doesn’t. A sportsbike the Diavel is not, but that doesn’t mean it doesn’t handle well on the road. The front rake is 28 degrees so it won’t tip in as fast as a sportsbike but at 234kg it weighs a considerable amount more, so you don’t want it to. The Diavel feels very stable and provides reliable feeling through the front on lousy roads, a trait which cruisers notoriously lack. The 240 section rear tyre means you won’t be able to keep up around the bends with a sportsbike capable of sharper lean angles, but you will have more fun coming out of them thanks to the wider tread and an engine that’s purpose-built for corner exits. Scrubbing off more speed is made easy with twin 320mm Brembo brakes up front and long 1590mm wheelbase. The brakes aren’t far from Panigale territory, and most would end up with brown stains in their pants if they found their limit, myself included. Realistically, the only limitation you will have if you manage to find yourself in a stoush with a sportsbike is top speed. A lack of fairing and windscreen on the Diavel means you will need respite from the wind by the time speeds get stratospheric. I’m not condoning it, but let’s be honest – it happens from time to time and the Diavel Titanium will obviously have a knack for finding wanted/unwanted attention from other riders. Whichever way you decide to go, you’ve gotta’ admit the attention you get is the reason you buy a limited edition bike like this.

The truth is, the Diavel will continue to polarise people as long as they try to find a preexisting box to put it in. It’s not a sportsbike, streetfighter or a cruiser. Ducati has simply nailed it – an aggressively styled, street-oriented performance bike with comfort, technology and handling to boot. It belongs in a class of its own. The Diavel Titanium more exclusive, exotic and intimidating and man, oh man it is one hell of a motorcycle. 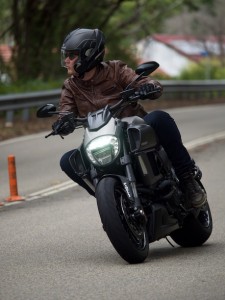