With light rain falling during the final laps the WorldSBK riders had to focus hard in order to avoid any mistakes and Davies did just that to register a third victory in four races at Lausitzring.

Coming from the back of the third row on the grid, the Welshman ultimately beat Rea across the line by 2.29s, with Melandri just over two further seconds back having held the lead early in the race. 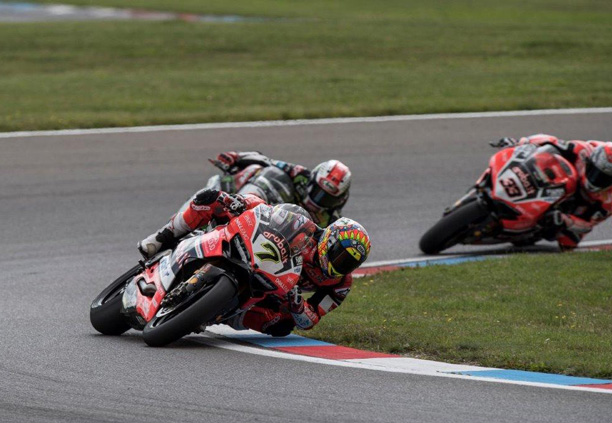 Despite setting pole on Saturday Tom Sykes (Kawasaki Racing Team) could not stay with the front three on this occasion and finished in fourth place having started Race 2 in seventh on the grid.

The results saw world champion and standings leader, Rea, open up a 70-point gap over his teammate Sykes in the standings with four rounds to go.

The WorldSBK grid returns to action September 15-17, at the Autodromo Internacional do Algarve, Portimão, Portugal.

Just behind them on the finish line was Lorenzo Savadori (Milwaukee Aprilia) as the top Aprilia-equipped rider, just trailing Camier by 0.115s in that tight group also involving Lowes.

A brave ride by Stefan Bradl (Red Bull Honda World Superbike Team) saw him finish 13th, after he missed Race 1 due to severe elbow pain from a crash on Friday.

WorldSBK Race One: Davies speeds to victory in Lausitzring, with Rea and Sykes also on the podium

As the riders enjoyed their first race since the summer break it was Welshman Chaz Davies (Aruba.it Racing – Ducati) who produced a superb ride at the Prosecco DOC German Round on Saturday, taking victory by a 1.834s margin from Jonathan Rea (Kawasaki Racing Team), with Tom Sykes (Kawasaki Racing Team) also on the podium.

Repeating his Race 1 victory from Lausitzring last year Davies controlled the race well after starting in sixth on the grid, taking the lead on the second lap. He was too strong for Rea and Sykes despite their best efforts to chase him down.

Sykes had set a new pole record earlier in the day but could not match Davies’ race pace and crossed the line in third place, 3.25s down on the Ducati-equipped race winner.

The Saturday contest at Round 9 in Germany saw Marco Melandri (Aruba.it Racing – Ducati) cross the line in fourth place, 16 seconds down on his teammate Davies, with Leon Camier (MV Agusta Reparto Corse) getting a creditable fifth place as he finished half a second behind Melandri.

Alex Lowes (Pata Yamaha Official WorldSBK Team) put pressure on Camier for fifth but just missed out by 0.186s as the highest finisher on the YZF R1.

On his WorldSBK return wildcard Markus Reiterberger (Van Zon Remeha BMW) was running in a solid eighth place for much of the race before he ran into the gravel at turn 10 and dropped down the order to eventually finish 13th.

Stefan Bradl (Red Bull Honda World Superbike Team) was forced to sit out due to pain in his left elbow, after crashing on Friday and having a further medical check following Superpole on Saturday morning. His condition is to be evaluated again on Sunday morning before Warm Up.

Matthew Walters is a late inclusion in the Swann-backed world superbike round at Philip Island from February 20-22, joining fellow Aussie wildcard Jed Metcher on the 25-bike grid. […]