DUCATI’S Chaz Davies has taken maximum points from the fifth round of the World Superbike Championship, winning both races at the Italian marque’s home circuit of Imola, Italy.

Davies is currently third in the Championship, 75 points behind leader Johnathan Rea (Kawasaki), and one point behind Tom Sykes (Kawasaki).

Sunday’s win was a big feat for Davies – the last 12 races in Imola have been won from the front row of the grid, and it equalled Carlos Checa’s record of winning from ninth on the grid due do WBSK’s new grid system in Race 2.

Davies arguably did it in tougher circumstances – a red flag in the early laps paused proceedings, but he produced a superb ride on the Ducati, overtaking provisional leader Sykes mid-race (post-restart) and going on to win by just under four seconds from Rea. 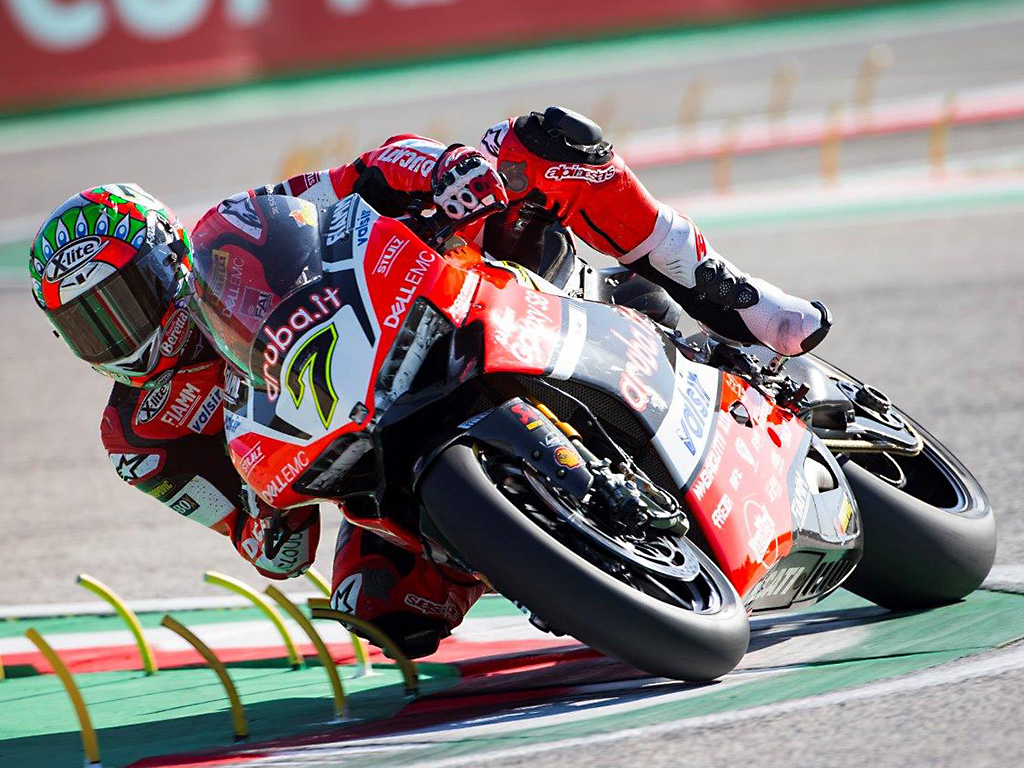 It was Davies’ first double victory of 2017 – a repeat of his Imola result from 2016 where the Ducati man also picked up maximum points at the Italian track last year.

Sykes had led the race but was eventually unable to hold off his teammate Rea for second, as the Northern Irishman ultimately beat the Yorkshirman across the line by +0.603s.

Xavi Fores (BARNI Racing Team) and home rider Marco Melandri (Aruba.it Racing – Ducati) were engaged in a close fight for fourth, with Spaniard Fores finally coming out on top in that duel by less than two tenths of a second.

It was a solid result for Laverty after a difficult day for him on Saturday, with his big crash in Race 1.

Likewise an excellent performance by Jordi Torres saw the Althea BMW Racing Team man finish in eighth place having got away from the back of the grid, after he missed Superpole and Race 1 on Saturday due to illness.

There was disappointment for Leon Camier (MV Agusta Reparto Corse) who crashed out of second place early on having made a superb start, with Alex De Angelis (Pedercini Racing SC-Project) also crashing shortly after the Englishman. Stefan Bradl (Red Bull Honda World Superbike Team) was another crasher and Randy Krummenacher (Kawasaki Puccetti Racing) was forced to retire due to a technical issue.

The initial staging of the race had earlier ended in a red flag due to track conditions at turn 16, following an issue for Ayrton Badovini (Grillini Racing Team) which had left oil on track.

In a delayed and shortened WorldSSP race on Sunday afternoon at Imola, world champion Kenan Sofuoglu (Kawasaki Puccetti Racing) took the win, using all his experience to beat Lucas Mahias (GRT Yamaha Official WorldSSP Team) and PJ Jacobsen (MV Agusta Reparto Corse), who both joined him on the podium.

Having missed the first two rounds of 2017 due to a training injury and then crashing out on his comeback at Aragon, Sofuoglu built on his Assen victory with a second consecutive triumph in this 11-lap sprint to claw back five points on championship leader Mahias.

Frenchman Mahias remains at the head of the standings following his second place finish, a fourth podium result of the year so far for the Yamaha man. Pole man Jacobsen crossed the line just behind Sofuoglu and Mahias in third, but he was never really able to challenge the leading pair for victory.

The WorldSSP race finally took place after WorldSBK Race 2 following an initial race start delay and two interrupted races earlier in the day – due to red flags after incidents had left debris and oil on track. Due to the rescheduling of the race it was shortened from an original 17-lap length to 11 circulations of the Imola track.

Davies made a brilliant start from pole and was untouchable, leading by well over six seconds when the race ended early due to a red flag, after a big crash for Eugene Laverty (Milwaukee Aprilia) at turns 17 to 18 – which meant track conditions were not safe for racing to continue. Laverty walked away from the incident which saw his Aprilia RSV4 RF go up in flames and he was taken immediately to the medical centre for a check-up after the high speed incident.

With 12 of 19 scheduled laps completed at the time of the crash, rider placements at that stage were taken as the final race results and Davies claimed his second win of the season. The ever-consistent Rea picked up more important championship points in second, whilst Melandri made it a good day for Ducati on home territory in third place on the podium.

Leandro Mercado (IODARacing) crashed out at turn 7 early in the race, with Nicky Hayden (Red Bull Honda World Superbike Team) pulling into the pits shortly afterwards due to a technical issue.

Jordi Torres (Althea BMW Racing Team) was unable to participate in race one due to illness.

Organisers of the opening World Superbike Championship round at Phillip Island have added ArenaCross to the three-day event, held February 21-23.
[…]

JOHNATHAN REA has shown early signs that he will once again be the one to beat in this year’s World Superbike Championship.. […]

Brits Tom Sykes and Chaz Davies on top of the Ring

Tom Sykes (Kawasaki Racing Team) and Chaz Davies (BMW Motorrad GoldBet) scored one victory each on the Eifel venue, with the Huddersfield-born rider regaining the Championship lead by one point over Sylvain Guintoli (Aprilia Racing Team), while the Welshman rode his S1000RR to first place for the first time after the double win at Aragon last April. […]