SOMEONE at Triumph has a sense of humour – after all, the last place most of us want to be is on a bike in a Storm, but here’s a machine which reminds you of bad weather every time you hear its name – Storm. 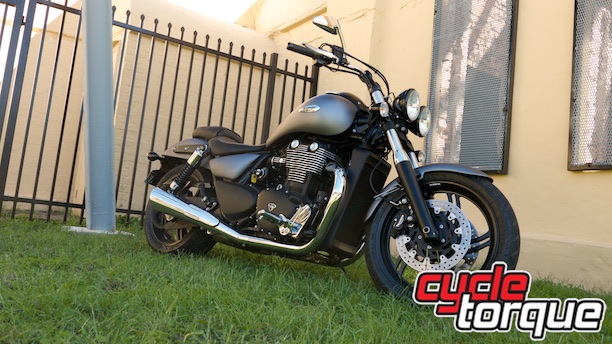 Of course, the word also implies energy, which the Triumph Storm delivers along with massive amounts of useable torque and brutal good looks.

The test bike matched the name, too – the silver/grey paintwork echoing the colour of a clearing storm, while the lack of ostentatious chrome work added to the brooding masculinity of the machine. This is a tough looking machine without being intimidating.

Fitted with the world’s biggest parallel twin cylinder engine, the Thunderbird Storm is very much a big bike – but it’s also got a low seat, which means just about anyone can get their feet on the ground and manoeuvring, while still something requiring care because of the weight, is much easier than I expected.

Fire up the big twin and there’s a shimmy and a shake or three as those big pistons travel a long way up and down the cylinders.

As soon as you start rolling the vibrations smooth out though, the Thunderbird thumping along like a smooth V-twin, thanks to the offset crankshaft. The incredible torque from the motor makes cruising effortless, with the bike delivering the meat of its power and torque at highway speeds from 60-130km/h.

Yes, this is one cruiser where you need to be seriously careful of your speed – I frequently found myself going faster than I thought on the long, low machine. Because of this I would have loved to have had a cruise control, but there’s little overt high tech on the Thunderbird models. No cruise, no traction control, no riding modes, no fancy instruments… it’s really just a big, comfortable traditional cruiser, and it makes no apologies for that.

The tech installed is also hidden – the EFI delivers fuel beautifully, with no hunting and the ABS is there for an emergency stop – but there’s no sticker proclaiming its fitment or switches to turn it off. But it’s there if you ever need it.

A casual glance might have you thinking the Storm is air-cooled: there is some ornamental finning on the barrels, but there’s also a radiator between the exhaust headers – not really hidden away, but not something highlighted.

The water cooling is important though, to keep engine noise at bay and to increase power and torque.

With a bore size of 107.1mm, there are seriously big pistons moving up and down inside the engine of the Storm, which in a traditional parallel twin would have produced filling-loosening vibrations – but not here. Twin balancer shafts and the offset crank smooth out the ride, leaving enough there to know you’re on a big bike but not so many to become particularly tiring.

Peak torque of 155Nm (115lb/ft) is reached before the tacho needle hits 3000rpm. This is why the Storm is so easy to launch from traffic lights and provides such effortless overtaking.

There’s nearly 100 horsepower available, but with this much torque it’s better to ride in taller gears and let the grunt do the job.

The Storm comes with a 6-speed gearbox, because too many people think they need that many. Maybe it helps fuel economy, but I’d love to try a Storm with a four-speed unit, reckon it would be an interesting ride. Won’t happen though. Final drive is by carbon-reinforced toothed belt.

The Thunderbird range has been a big hit for Triumph, with the range now out to four – the standard Thunderbird (which has a 100cc smaller motor), the Storm, LT and Commander. Each has slightly different styling and features, with the Storm being the bad boy of the range.

It eschews the luggage of the LT, the classic styling of the Commander and the tradition of the standard Thunderbird to stand out as the toughest of the flock.

The standard exhaust sounds OK, but the optional accessory pipes fitted to the test bike sounded deep and soul-soothing. They matched the heavyweight style of the bike – everything seems oversized, from the fat rear tyre to the big fuel tank to the wide handlebars and forward set pegs.

I’m almost surprised the Storm has a pillion seat standard – it would look even tougher as a solo.

Triumph prides itself in building good handling machines, and the Thunderbird Storm is no exception. Within the genre of large capacity naked cruisers, the Storm is one of the best – you can have a lot of fun in the twisties.

Cornering clearance is limited by the forward mounted footpegs, but there’s more there than I expected. The rear suspension does wallow a little, but not too much, and the front end feels pretty planted and confidence inspiring.

Fitted with twin rear shocks, swapping them out for something better would be a very easy and quick job, but I doubt if many owners would bother, at least until the warranty’s expired.

Hauling the bike down from speed are triple disc brakes. The front stoppers require a bit of a hard squeeze to get the best out of them, but the rear is excellent – powerful and with good feel through the lever, I found myself using the back brake a lot more than usual on the Storm.

The suspension comprises 47mm front forks and twin rear shocks. The shocks have spring preload adjustability, so you can tweak them for a passenger or luggage. Out of the crate the suspension is fine, and if you’re not into hard charging you’ll probably think it’s great – comfy without any nasty surprises.

The low seat makes manoeuvring the big machine surprisingly easy, and feet-up low speed control is good too, once you’re used to the forward-set footpegs.

The fat 200-section rear Metzeler gives the Storm a tough look and despite its width the bike leans side to side very well – Triumph got the geometry right, and the Storm has excellent low-speed steering and good handling for such a big cruiser.

Four-piston calipers up front with ABS can pull the Storm up in an emergency stop quickly – but most owners won’t be buying lots of front brake pads I reckon. The riding position and style of the bike, combined with a powerful and easy to use rear disc, means it’s so easy to let the back of the bike do most of the work I reckon that’s what most riders will do – but don’t get into the habit of not using the front, that brake is a lot more powerful in an emergency than the rear.

With a 22 litre tank the bike doesn’t need to be refilled ridiculously often – 330km-plus from a full tank is achievable. This means the machine is very suitable for some touring duties, as well as day rides.

Instrumentation is more comprehensive than you might expect if you’ve just glanced at the big tank-mounted speedo. There are lots of hidden warning lights and a small digital readout, too.

Triumph has reinvented the big-bore parallel twin with the Thunderbird range, and the Storm is the most fun of the bunch. It’s got the style, the grunt and the presence to make an impression, and leave a huge smile on the face of the rider. Unlike many cruisers it is deceptively fast – the long wheelbase, good handling and gentle vibrations combine to make it relaxing at highway speeds.

Its quality of finish is excellent and it really does feel like it’s built to last a long, long time – there’s little ‘disposability’ about it. I wouldn’t be at all surprised to find Thunderbird Storm owners keep their bikes for many years, because there would be few reasons to change.

Triumph Motorcycles and Indian company Bajaj Auto have announced the beginning of a global partnership, which could mean we could see small-capacity Triumph-badged motorcycles in the not-too-distant future. The companies state the objective of their […]