He was feeling positive following some changes between sessions today. The Australian has scored podium finishes but is hoping Oulton Park can be the scene of his first 2013 win tomorrow.

Josh Brookes
“Yeah I’m fairly happy with the qualifying. We were lacking a bit through free practice and struggling to get the bike to do what I wanted it to do. Strangely enough we’ve looked over settings we tried last year that didn’t quite work, but with the move to Ohlins this year, and some other information we have looked over, they seem to be working for us this weekend. It now means we have a new bank of adjustments to try for tomorrow. It’s interesting and maybe a bit frustrating at having to throw away three years of information and start again, but we are moving forward and will continue to do so tomorrow.”

Alex Lowes (below) claimed pole position ahead of Shane Byrne (Rapid Solicitors Kawasaki) with a stunning lap, the fastest ever with the current technical specifications. Lowes admits he was surprised with his pace in qualifying as he dipped into the 1m:34s lap times, claiming his second consecutive pole position for Samsung Honda. The Lincolnshire ace is now gearing up to challenge for his first win of the season tomorrow. 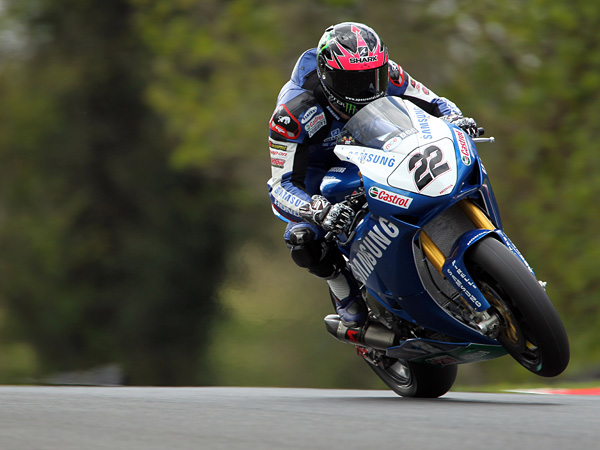 Alex Lowes
“It feels good to be on pole and to be honest I didn’t expect to be able to do that time but I will definitely take it! You don’t get any points today as it is the races tomorrow that matter but we want that first win; if it is on then I am going for it! Our pace feels good and we have been working hard and I will be pushing as hard as I can tomorrow to try and take that win for Samsung Honda.”

Completing the front row is Rapid Solicitors Kawasaki’s Keith Farmer who claimed his first front row start in MCE BSB in his rookie season. The reigning Superstock champion is now aiming to stick with the leading pack in tomorrow’s races.

Jon Kirkham heads row two from Chris Walker and Tommy Bridewell with Peter Hickman pushing the Lloyds British GBmoto Honda to eighth. Ellison will start from tenth after the Milwaukee Yamaha suffered a problem at the start of the session and was forced to watch from the garage.

Brookes’ team-mate, BSB rookie PJ Jacobsen will start the opening 18-lap race from row three in 12th position. He lost the lion’s share of Free Practice 3 with some mechanical adjustments that had to be implemented, and although a little frustrated at losing-out on making Qualifying 3, the New Yorker was satisfied with his progress.

Motul Pirelli Suzuki’s Cody Cooper won his first MX Nationals, Australian Motocross Championship, round of the 2013 season on Sunday, 2 June, at Conondale in Queensland as team-mate Matt Moss finished runner-up in a 1-2 result for the team with Billy Mackenzie making up the top three. […]

Following qualifying for the Red Bull U.S. Grand Prix, Stefan Bradl, courtesy of a 1’21.176 lap time, is celebrating the fact that he is the first ever German pole-sitter in the premier class of MotoGP. […]