Tom Sykes (Kawasaki Racing Team), pictured above, and Chaz Davies (BMW Motorrad GoldBet) scored one victory each on the Eifel venue, with the Huddersfield-born rider regaining the Championship lead by one point over Sylvain Guintoli (Aprilia Racing Team), while the Welshman rode his S1000RR to first place for the first time after the double win at Aragon last April.

Sunday at the Nurburgring was a day of exciting races and injury setbacks for some of the protagonists of the eni FIM Superbike World Championship.On the difficult side of the race day, Loris Baz (Kawasaki Racing Team), Jonathan Rea (Pata Honda World Superbike) and Leon Camier (FIXI Crescent Suzuki) all had heavy crashes and got injured, with differing consequences. 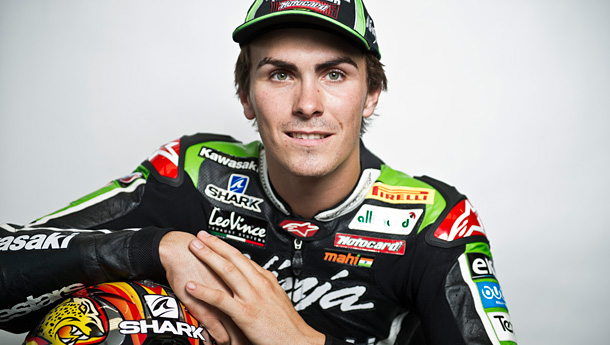 Loris Baz (pictured above), following the crash he had during the morning’s warm-up, was diagnosed with a fractured C2 vertebra, fortunately with no neurological issues. The young Frenchman is fully conscious, he talks and jokes with people who are with him and has full mobility of his body. Baz will remain under observation at Adenau’s Krakenhaus Maria hospital, that is located near the track, while waiting to be transferred and for the medical checks that will define plans for his recovery.

Jonathan Rea sustained a fractured left femur and will undergo surgery tonight at the military hospital at Koblenz, where he should stay for the next two or three days, but, even in this case, further updates are expected.

Good news from Leon Camier: after being immediately assessed at trackside by the medical staff he was then flown by Air Ambulance to Stiffungs Klinicum in Koblenz. Camier was observed and scanned for potential neck injuries, but the scans proved negative and he was given the all-clear despite the massive impact. He hopes to leave hospital later today and will assess his condition in the coming days to decide on his availability to ride at the next race.

Once the flag came out, Marco Melandri (BMW Motorrad GoldBet) was in the lead after a successful overtake at the first turn but, as the final results were based on the previous lap, Sykes was awarded the victory, with Melandri’s team-mate Chaz Davies completing the podium.

The three riders, along with Rea, rode together up front, but it was Sykes who led almost the entire race, after overtaking Melandri at the second turn during the opening lap.

Factory Aprilia rider Eugene Laverty ended up 15th after crashing out of Turn 4 in the early stages of the race, and rejoining following a pit-stop. Home rider Max Neukirchner (MR-Racing Ducati) had to withdraw from the race due to a technical problem that occurred on the fourth lap.

Jonathan Rea and Leon Camier were both flown by helicopter to the hospital. Rea was diagnosed with a broken left femur, while Camier was sent for precautionary measure due to a neck injury. (see above)

Race 2 – Chaz Davies wins as Sykes is new leader
Chaz Davies (BMW Motorrad GoldBet) got back on the top step of the podium after winning the second race of the day, that was red-flagged on the nineteenth lap after One Event rider Matej Smrz (Yamaha Motor Deutschland) suffered a high-side and landed on track next to his YZF-R1, laying some oil on the tarmac.

The Welshman successfully defended the lead in the final laps in a three-way battle with second place Eugene Laverty (Aprilia Racing Team) and team mate Marco Melandri. Davies was able to repeat exactly the same results scored last year in the two races, and achieved a long-awaited win after the double at Aragon earlier in 2013.

Tom Sykes: “It is very difficult to tell if I could have come back at Marco in the last two laps of race but the decision to stop the race has gone in our favour for a change. I was expecting probably a few more points in race two but it is racing and things like this happen. It seems that we had some limitations in that race, which is a shame because over race distance I was 100% confident in myself. It was important to keep Sylvain Guintoli behind me in that second race as we saw how every point counts last year.”

Chaz Davies: “I am obviously super happy with the victory in race two. I was already happy with my podium in race one but I knew we could improve and so we did. We were just slightly struggling in a couple of areas but we worked on that for the second race. The last couple of laps I just put my head down seeing if I could just get away. In the end the red flag came and I was in right place at the right time. A big Thank you to my team as they did a great job this weekend and we got a double podium again.”

Despite the absence of three top riders due to injuries in Race 1, Race 2 was characterised by a fierce battle up front for the win. Tom Sykes (Kawasaki Racing Team) and Sylvain Guintoli (Aprilia Racing Team) finished fourth and fifth respectively, after being very close to the front for most of the 18 laps completed. The two riders, though, could not manage to get in the mix for the top-3, as well as sixth place Davide Giugliano (Althea Racing Team Aprilia), who lost a lot of ground in the closing stages.

Sykes and Guintoli are still separated by one point, but the factory Kawasaki rider is now the new leader in the standings, at the end of the tenth round of the season.

* Possible updated results could be defined by the International Disciplinary Court which is dealing with the appeal lodged by Aprilia Racing Team and rider Sylvain Guintoli, following the decision taken by the FIM Stewards in Monza (Italian Round, last 12 May) to cancel the drop of position sanction (from third to fourth place in race 2) imposed by the Race Direction on rider Tom Sykes

World Supersport
Sam Lowes (Yakhnich Motorsport Yamaha) has scored probably the most important win of the season so far, as he crossed the line a lonely first at the Nurburgring , while main rival for the World Supersport title Kenan Sofuoglu (Mahi Racing Team India Kawasaki) was out of contention from Lap 10, after crashing out of the second turn.

Lowes didn’t get the best start off pole but in just two laps he was able to make his way back onto the lead, though unable to pull away at first from the reigning Champion. Once Sofuoglu pulled out of the race, his team mate Fabien Foret was unable to keep the pace of the Brit, so for the points leader it was only a matter of maintaining the gap up to the finish line

Lowes is now 54 points ahead of Sofuoglu in the standings, and could be crowned champion already after the Turkish rider’s home round scheduled for September 15th.

IT’S NOT often you get to test two similar models from the same manufacturer back to back but that’s exactly what we did with the Aprilia RSV4 R APRC and its more exotic, and more expensive stable-mate, the RSV4 Factory APRC. […]

Josh Brookes was relentless in his quest for victory in the final MCE Insurance British Superbike Championship race of the weekend at Oulton Park. […]

Tom Sykes (Kawasaki Racing Team) has clocked another outstanding lap-time to grab his sixth consecutive Tissot-Superpole out of 7 held so far in 2013 – the 17th of his career. […]