It might share an indicator or two with another BMW model, but that’s about it: the new R 1200 GS is an all-new bike: engine, chassis, the lot, built with the heritage of BMW and the GS-range in particular, but a new machine. 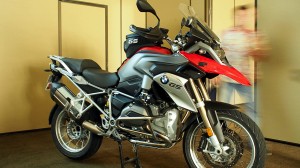 As you’d expect, it’s a technological marvel, with ride by wire throttle, improved and in some cases simplified electronics and improved performance, but BMW assured us it’s still a Boxer at heart (we get to ride the bike tomorrow).

The important things to know are the water cooling is there to take the performance to the next level while still meeting noise and emission restrictions, that the ABS, traction control and Electronic Suspension Adjustment have been refined and improved, that the pricing hasn’t moved much.
Getting into the details includes knowing there’s a wet, multi-plate clutch, higher air intake snorkels, a larger range of seat height adjustment, refined suspension and much more when it comes to the engine and chassis.
The electronics now feature new riding modes for on and off road, including the ability to set the front wheel’s ABS to on while having the rear wheel’s ABS off. The traction control is said to be more seamless, and there’s a range of mode settings for road use which make the bike nicer and safer to ride.
The enduro modes feature a standard setting and one described as Enduro Pro, which is for expert riders off road, but still offers ABS on the front wheel and some level of traction control.
The riding modes can be altered on the fly: you don’t have to stop.
As you’d expect there’s a whole bunch of accessories and options: most Australians will choose to have the bike blinged up with the Dynamics package, which adds $3150 to the $21,250 base price, with the popular options after that being the wire spoke wheels ($580) and cruise control ($500).
Low suspension, a low seat and luggage are all available.
The new GS goes on sale next month.Cycle Torque will post impressions of the bike from the launch as soon as we can.
– Nigel Paterson