Allerton dominated the Superpole session, claiming P1 and in doing so made a bald statement to his rivals.

“We came into the championship as underdogs and no one expected us to be P1, however I know how good the bike is and being on the Pirelli tyres is a definite advantage,” Allerton explained.

“It’s a long championship but we couldn’t ask for a better start. The new Superpole format was terrific, I was excited to see what the competition was doing and test myself, the bike and tyres to remain in front”.

Suzuki’s Wayne Maxwell will start from second position on the grid. Maxwell wants to improve from his Superpole qualifier to stand on the top step of the podium.

“It’s a great start, however I need to find a little more come race time”

“It takes me a little longer to warm up so this was much better and it was my best Superpole qualifier to date”. 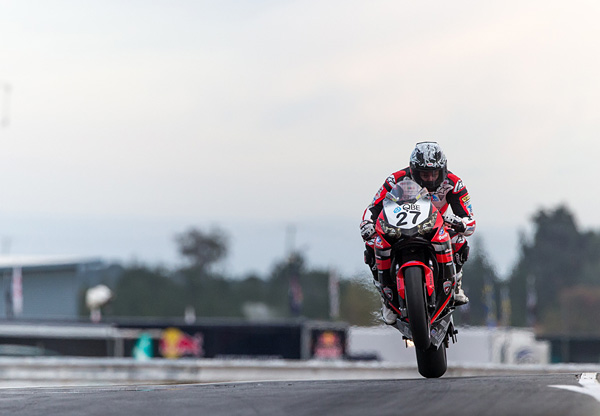 The all-new format was not without controversy, with Team Hondas Jamie Stauffer (above) excluded from partaking in the final session due to a technical breach after it was found that his calliper had not been lock-wired.

Pirelli’s Leo Cash was impressed with Allerton’s times. “This is great for Pirelli and BMW. We have faith in our product and look forward to challenging for wins throughout the year. It’s a long season and we will continue to collect data in an effort to improve”.

The opening round of the 2014 AirRoad Australian Superbike Championship provided some thrilling motorcycle racing action at Queensland Raceway today. […]

The August 2016 issue is full of Adventure with tests of some hot new Adventure bike and lots, lots, more. Download, read online or grab a printed copy now. […]