Alex Phillis, son of Aussie Superbike legend Rob Phillis, has been given a call up to ride with the Italian Lorini Honda squad for the opening round of the Supersport World Championship, at Phillip Island this coming Sunday.

Phillis arrived at the circuit early Sunday where he met his Lorini team to prepare for testing.

The 21-year-old was not even born when his dad – a larger than life rider for Kawasaki in the ’80s and ’90s rode in the first World Superbike round at Phillip Island in 1990 and came up trumps in race two after a monumental dice with compatriots Peter Goddard and Malcolm Campbell. 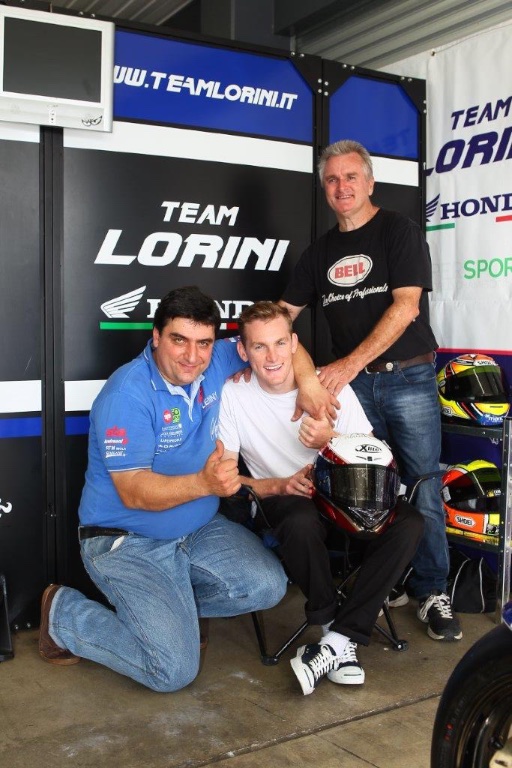 25 years later, Alex, from Melbourne’s eastern suburb of Kilsyth, has been given the chance to compete at a world championship level after a road racing career which has spanned seven years across Australia and Europe.

At Phillip Island, Alex will be joined by fellow class debutantes Glenn Scott, Aiden Wagner and Sam Lambert in the World Supersport line-up.

“This is a brilliant birthday present!” said Phillis, who turned 21 on January 27.

“Like all riders, I’ve always wanted to compete at a world championship level, and I want to thank Team Lorini for giving me the chance to compete at Phillip Island. It’s an experienced team and they know how to get the job done, and Raffaele was very competitive on the Honda in 2014.”

“I’ll start testing the CBR600RR at Phillip Island today. I’ll obviously be playing catch-up with the rest of the pack but I’ll just have to put that in the back of my mind and get down to business.

“At least I know the circuit well, and I’m looking forward to riding at Phillip Island again after a two-year absence.”

Alex’s dad Rob couldn’t be happier with his son’s call-up.

“It’s horn that Alex is going to be riding in the world supersport race,” Rob said. Still competing in the historic racing ranks, he continued, “He’s a good kid with an experienced head on his shoulders – unlike me at that age… – and he’ll give it his best shot.

“Racing against the best in the world is a strong test for anyone, but he’ll give it a good shot – I can’t wait to see him get out there.”

After beginning his motorcycle racing career in the motocross ranks, Alex then moved onto junior road racing before finishing fourth in the 2011 Australian 125GP title, which included seven visits to the dais.

The quartet will begin a two-day test alongside their world superbike colleagues at Phillip Island today (Monday, Feb 16), before round one officially kicks off on Friday, February 20.

For tickets and on-circuit camping for next weekend’s 2015 Superbike World Championship opener, Phillip Island Swann round are available on www.worldsbk.com.au or call the SBK toll free hotline on 1 300 728 007.

Children 15 and under free for gate entry and camping.

FREE FIREWORKS AND FESTIVITIES FOR A 25 YEAR WORLD SUPERBIKE CELEBRATION

Celebrating 25 years of world superbike racing at the island, Phillip Island circuit is staging FREE fireworks and festivities for everyone this Friday night.  Gates open at 7pm Friday (Feb 20), with a host of motorcycling legends to entertain the crowd, stunt bikes and KidsZone action all culminating in FREE fireworks to light up Gardner Straight at 9pm.    Friday night ‘s 25 year world superbike celebration at Phillip Island Grand Prix circuit – is free for everyone – ticket holder or not!

If your sleigh’s looking pretty sparse, a weekend away at the World Superbikes Championship at Australia’s motorcycle mecca, Phillip Island, is the ideal gift for anyone who loves speed or sport. […]

WORLD champion and honorary local, Brit Johnny Rea (Kawasaki), has won the opening two rounds of the Superbike World Championship at Phillip Island, the opening round of the year. Riding the new ZX-10R, Rea was […]

Matthew Walters is a late inclusion in the Swann-backed world superbike round at Philip Island from February 20-22, joining fellow Aussie wildcard Jed Metcher on the 25-bike grid. […]