Smouldering looks, especially in the café racer/minimalist genre of motorcycles that seems to be the in thing at the moment, and the V7 Stone, with its satin black paint, black engine and wheels, and the odd dab of chrome here and there looks the part perfectly.

The V7 range caters for quite a few tastes, from the basic Stone to the wild V7 Racer, with its chrome tank, bikini fairing and semi crouch riding position. All of the V7 models share the same platform of frame and engine, and unsurprisingly all ride very similar. 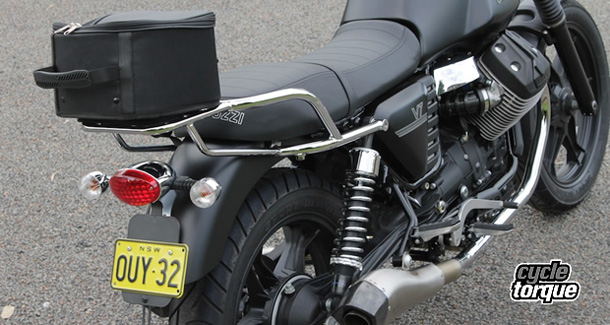 What you get is a bike that’s lots of fun to ride, especially at the low to moderate speed ranges. It doesn’t have huge reserves of horsepower but then it doesn’t really need it.

Out of the bunch, the V7 Racer is the easiest to ride at higher speeds, and really is a blast when you ride it quick. It’s like going back in time when you ride a V7. And that’s really the whole point of the bike.

At Cycle Torque we are tinkerers, so it was only a matter of time before we looked to muck around with ‘our’ V7.

While the mufflers look and sound fine, they were crying out to be ditched in favour of a pair with more ‘soul’. We only had to check out Moto Guzzi’s accessory list to get starry eyed with the slip-on Agostini exhaust. It’s an easy bolt on affair, and really unless you have two left hands should take less than an hour to fit. 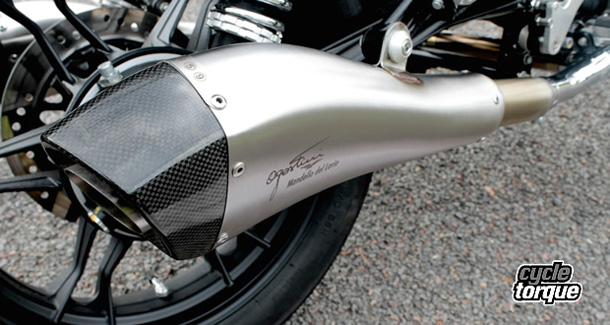 They are a different style to what you might expect would suit a bike like the V7 but we think they look cool, partly because of the curved shape. And they sound brilliant. They really liven up the engine in both throttle response and power. But now it’s making us want to twist the throttle a bit harder to bask in the wonderful exhaust note.

In the interests of licence retention we have not tested for any top end speed increase from the Agostini pipes but the chances are, considering the low and mid range increase, it’s a worthwhile one.

The pipes retail for $1,499 and the Product Code number is AGO-V7-AMV7HFB.

So from there we looked at some luggage capacity. You can go aftermarket but the V7 is a bit of a niche market machine so once again we checked out the Moto Guzzi accessory catalogue to see what was there. 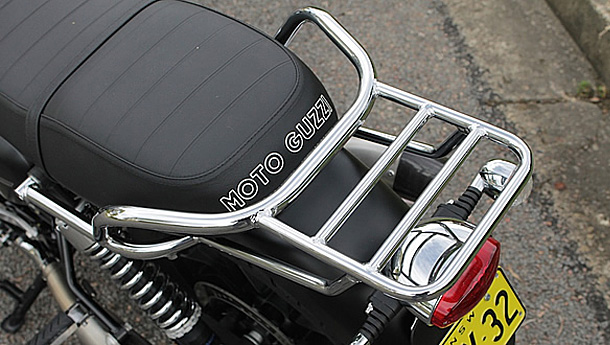 Seeing the chrome rear rack and leather bag made the decision easy. Once again it’s a simple job fitting the rack and the bag takes seconds to take on and off. It’s old school in the looks department – a contrast to the Agostini pipes – but suits the V7 well.

It’s not huge but perfect for daily commuting or a day ride. For weekends away we would go for a tank bag, and possibly throw-over panniers.

The V7 range does offer a few choices re paint schemes. We particularly like the V7 Special, which harks back to the V7 Sport of the early 1970s. So, if you don’t like the satin black looks of the Stone there are other options. 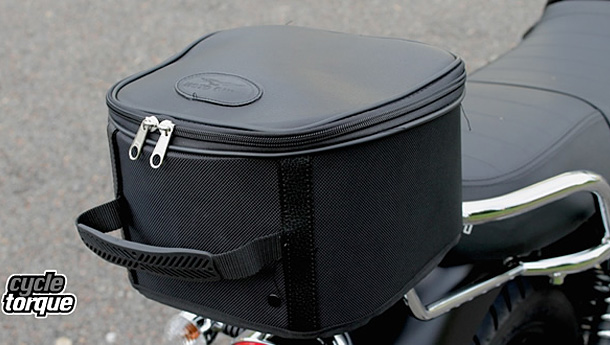 So far we are happy with the updates to our long term Moto Guzzi but given the option we would do more.

How about a V7 Special inspired paint scheme, but in different colours, maybe metalflake?
A set of ’bar end mirrors, satin black of course, would also fit the bill nicely.

Lastly we would look at ‘tweaking’ the suspension a bit, with some adjustable rear shocks, and maybe different springs in the forks.
The V7’s suspension isn’t optimum for heavier riders or poor roads, for some the idea would be to get the suspension ‘plusher’, rather than firming it for fast riding.

That said, we do seem to be twisting the throttle further south now the Agostini pipes are on.

Next time we let loose some riders with absolutely no Moto Guzzi experience to see what they think of our blank canvas, which is not so blank anymore.

John Sample Automotive has announced the addition of the Black/Orange V7 Special to the 2013 model range. […]