All new from the ground up, the 2014 Yamaha YZ450F has rapidly gained interest and hype from around the world since the original spy prototype photos were released in early 2013.

Yamaha has left no stone unturned in the development of its premier class machine, which boasts an all new chassis, refined KYB suspension components, an engine with a very long list of modifications and improvements, and finally some very stylish and futuristic new bodywork. 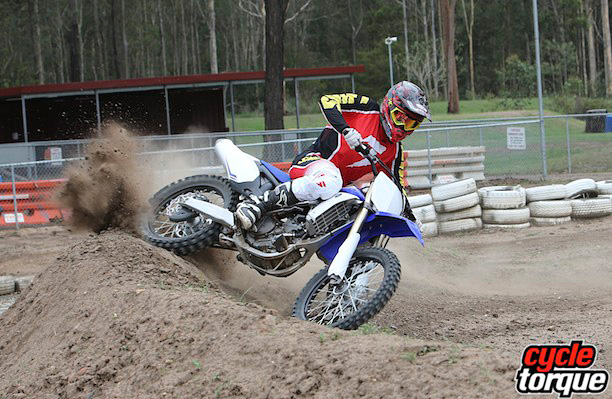 Chassis and Ergonomic
An Aluminium Bilateral Beam frame is again used on the 2014 YZ450F. It might be the same in name and look similar but it’s been substantially changed.

The controlled flex design is made up of 10 different types of forged, cast and extruded aluminium sections, welded together aiming to maintain a strong yet flexible and balanced frame. 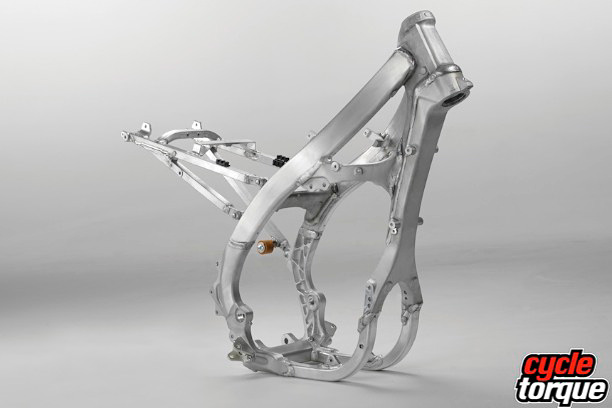 Major changes were made to the steering tube at the front of the frame, with the front end now sitting 10mm closer to the chassis. It is interesting to note that the 2014 YZ450F chassis has very similar dimensions to the design of the 2013 YZ250F chassis, which has proven itself to be very good.

A new rear sub-frame is complementing the rest of the chassis changes, the very unique aluminium design is vastly different to anything we have seen in the past from Yamaha and offers a more lightweight construction than in previous years. 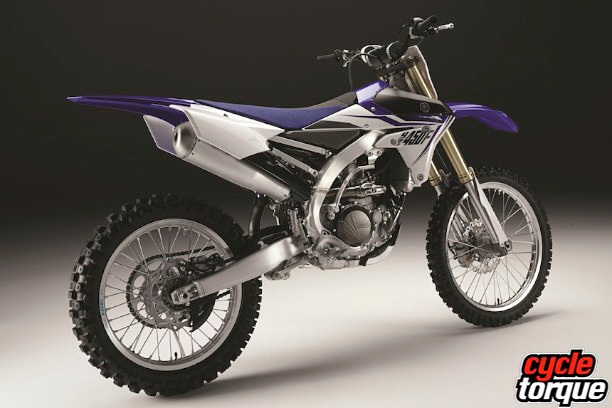 As we’ve seen in the past new bodywork can be an easy way to jazz up an old bike, shape up a few new plastics, bolt them on and there you have it, a stylish new look with absolutely no kind of performance gains to speak of. Not so with the YZ450F.

The fuel tank, air filter/airbox, and radiator shrouds have been designed with much more in mind. Yamaha’s mass centralisation focus has had great effect on these areas with the fuel tank now sitting further back and much lower in the chassis.

The tank is tucked away so low, that the seat is now a two piece design which allows a small piece at the front of the seat to unclip and lift away, unveiling the fuel cap. 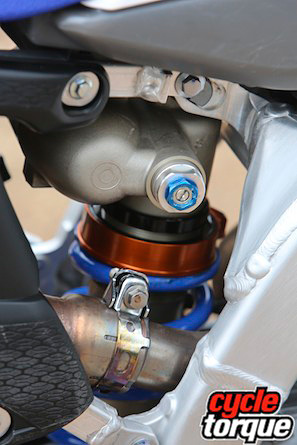 The airbox now has more room at the front of the bike which simply put, drastically improves airflow and engine performance.

A very sleek looking airbox cover is bolted in at the front of the seat where you would be used to seeing the fuel cap.
Three small bolts hold down the cover, allowing for much easier access and maintenance to the air filter and airbox than on previous models.

Further up front, the top triple clamp has been redesigned and a larger front axle has been installed to improve stability in the front end.

Suspension
The KYB twin chamber speed sensitive forks remain very similar to the 2013 model, however the spring rates and internal valving specs have been modified to go with the new chassis.

The KYB shock is all new with a repositioned reservoir which is now on the left hand side instead of being positioned horizontally across the top of the shock. 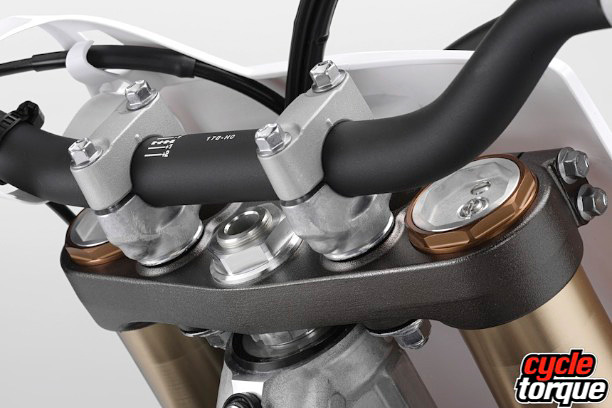 Once again spring rates and new internal valving has been developed to match the new chassis.

Engine
While the focus may seem to be centred on the updated chassis and improved handling of the bike, the engine received a very long list of refinements to improve what was already one of the best engines in the class. 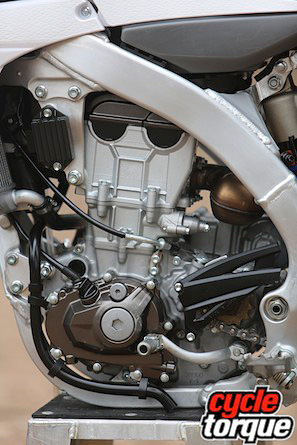 A new ‘wrap around’ style exhaust pipe is featured on the reverse cylinder design 450cc DOHC engine. With the exhaust exiting the cylinder out of the rear, it wraps around the engine before mounting to the muffler section at the rear right hand side of the bike.

The Cylinder head and Valve train components were also subject to major changes on the reverse cylinder engine design. The intake and exhaust camshafts, valves and ports have all been modified to improve combustion and efficiency, while also delivering smoother power.

Beneath the cases, a new gearbox has been developed. The ratios have been modified with 3rd gear now being closer to 2nd. Further refinements were made to the shifting forks and shafts to improve the feel and durability of the gearbox.

New clutch springs and friction plates go hand in hand with the gearbox modifications to improve the feel and durability of the engine.

On the track
For previous YZ owners, one of the first thing you might notice is the new engine characteristics. The spread of power on the 2014 model is very broad and quite linear. 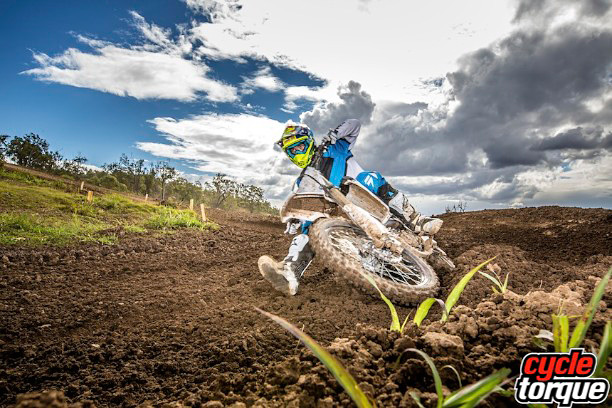 The power has a nice smooth transition right off the bottom until the engine signs off well into the rev range. If you’re confident enough to wrap on the throttle with a bit more aggression, the engine has more than enough grunt to pull you out of any sandy loam or roar up the toughest of hills.

In a world of ever increasing sound and emissions laws, it is becoming more and more common to ride production model motocross bikes that feel extremely ‘choked’ up and restricted.

Yamaha has done a fantastic job of meeting all of the new requirements yet still providing riders with a bike that delivers great throttle response and power throughout the range. 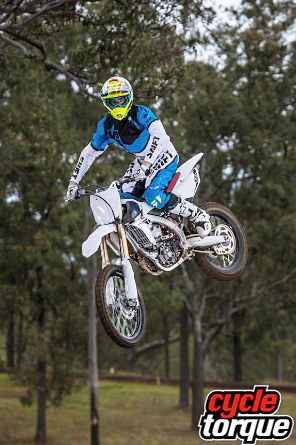 At no point did we ever feel like the ECU needed a tune up, or airbox mods and an aftermarket exhaust would unveil the real potential of the YZ450F engine.

The KYB suspension is set up on the firm side of the scale, and as usual setting the ride height at the rear shock is essential to provide a balanced ‘feel’.

We enjoyed the capabilities of the KYB speed sensitive suspension, with all the fuss being about Air Forks at the moment, some riders have got lost in their set ups and forgotten how well a traditional style fork can work when sorted.

We pushed the forks up through the triple clamps to the first ring to improve cornering and slightly softened up the overall feel at both ends to match the weight of our 80kg test rider.

After a few small changes it was easy to gain confidence and become more accustomed to the feel of the YZ. The oil and spring type suspension certainly didn’t hold us back and when it came to making more personalised changes it was a much easier process.

The stability and balance of the bike has improved considerably over previous models, however the YZ still remains a little bit different to the majority of its competitors.

The new bodywork gives a more slim feeling and allows you to move around much easier through turns and gives the bike a much more manoeuverable feel. Take the time to adjust to characteristics of the Yamaha and you will be rewarded. 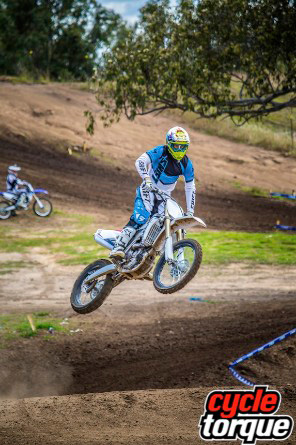 Verdict
The all new YZ450F certainly ticks the boxes. As a complete package, it’s a very hard bike to fault. The components and overall finish from Yamaha is second to none.

The engine has proved to be bulletproof and easy to maintain without costing an arm and a leg to keep in good condition, while the suspension offers plenty of tuning ability to riders at any level.

The new chassis is a nice improvement over the previous model with a noticeable gain in the overall handling characteristics. Add this to the impressive list of GYTR parts already available for the new YZ450F and you have yourself a complete race ready package.

At the time of writing Yamaha had yet to release the price of the 2014 YZ450F.

Dani Pedrosa has taken victory in the Brno MotoGP ending the winning streak of team-mate Marc Marquez, with Jorge Lorenzo and Valentino Rossi in second and third place. […]