WITH cast mag wheels, clip on bars and a kickstart as the sole starting method, you could be mistaken for thinking this machine is straight out of the ’70s. It is, but… you would be wrong. This is the new Yamaha SR400, well, it’s one of the custom possibilities you could build out of one.

The original Yamaha SR was released in Australia in 1978, back then it had a 500cc engine which was also the basis for the TT500 and XT500 models. In Japan during that era, registration restrictions meant those models had to be 400cc. Things may have gotten bigger and better in Australia and Japan since then, but the popularity of the SR has never completely diminished.

The Yamaha SR has been kept bubbling away in Australia by its quintessential styling that pays tribute to earlier British machines, they have been more affordable, parts have been easier to get, relatively easy to maintain and they have treated owners well if it’s been kept in good nick. There’s an SR500 club which has also kept the spirit alive for owners – founded in 1999, the club has been running ever since, and the club’s website claims to have roughly 130 members from all over the world. 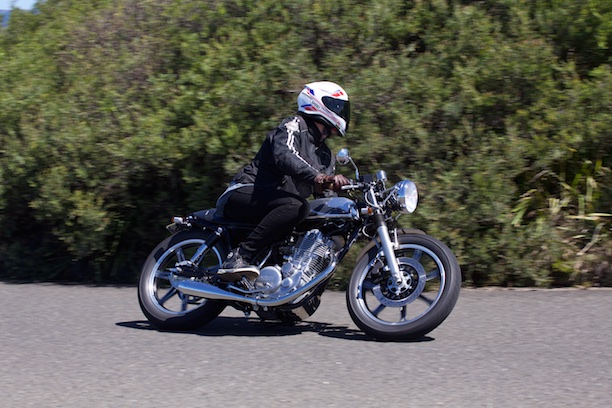 Though it is not until you cue the Learner Approved Motorcycle Scheme and more recently the rise of Deus Ex Machina, who has seen the value in the SR400, using it as a base to build custom café racers, scramblers, street trackers, brats, surf brats and bobbers that the re-release of the SR becomes significant. The popularity of these types of machines at the moment is huge, and you can see it in the online markets and custom bike builders setting up shop all around Australia. You’d like the Kustom Kommune if your prefer a do-it-yourself approach, where every time you pick up the tools to do some work, you learn a little bit more about the bike and a little bit more about yourself.

If you search eBay for a Yamaha SR400 or 500, you will see that to buy one of these bikes in a decent shape can cost anything from 5-10 grand. People have even been importing them from Japan to get top dollar, it really is that competitive at the moment.

I think this is the reason that makes the SR400 re-release from Yamaha a great move in Australia. It could help to put a ceiling on the price of older models being sold online for the time being, because you can now buy a brand new SR400 for under 10 grand knowing that you aren’t going to have any issues. Once it’s yours, you can leave it as is, customise it, modify it, whatever. What you do get from the past with the new SR400 is the knowledge that this bike in its original form has lasted over 35 years and it has kept its value fairly well, so it has the capability and potential to last owners another 35 years or more. Deus is even offering a package of custom parts for the new SR that you can bolt on at home which goes to show that this new model has been built with the chief ethos of customisation.

Let’s take a look at this bike 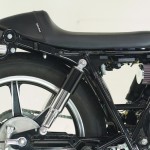 It has a single cylinder 399cc engine which is air-cooled, with the engine’s oil being carried in the frame, the main reason the engine, even back to the ’70s, has always been a slim little bugger. It weighs about 174kg wet (this custom may be lighter than that), has a 298mm single hydraulic disc on the front and a drum brake on the rear. There’s 18 inch cast mag wheels at each end and is kickstart only. This SR400 custom which has been custom built as an example of what is possible with the bike by Yamaha Australia. It features clip-on ’bars, gum grips, LED indicators, a café styled seat, Daytona short shocks on the rear, shorter front fender, a custom polished fuel tank, Prunus short exhaust pipe, K&N Pod filter, cast mag wheels

instead of the standard wire wheels, and of all things, a fuel pump from a V-series Commodore. All up, there’s over five grand of parts put on this bike, over the $8,999 new price, but that doesn’t mean you can’t customise this bike on a budget or have to replace every part like the twin coil rear suspension, fuel tank and the standard spoke wheels. If you want to take the café racer route like this custom, its all about removing unnecessary weight. The best part of this custom build by Yamaha Australia is, all of the parts that have been used are bolted on, which means you don’t have 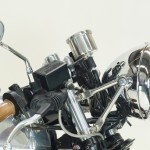 to make any modifications or grind any bits off the SR400, if you want to change it back to

original, or even something completely different, you can. In saying that, whenever you take out the air box and replace it with a pod filter, it does change the air and fuel mixture which can have the potential to cause some problems if it’s too far out of the fuel injection system’s capabilities. 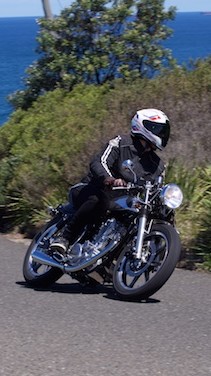 The café racer styling on the SR400 custom might give you the impression that the bike is harder to ride. It doesn’t have an upright riding position and you can find yourself seated a little bit behind the centre of the bike, though this is not the case. You can take your time with it thanks to the single cylinder engine which has a long stroke, this means that it will thump away at low revs easily and will take a bit of effort to stall. It is also easy to kickstart if you know the procedure. The kickstart has a decompression lever which manually opens the exhaust valve and also has an ignition mark on the rocker cover which lets you know when the piston is in the right spot to start. To kick it in the guts, look for the kickstart indicator on the engine head and fire away. If you get stuck, the air has compressed above the piston, let it out with the decompression lever, give it another kick and you should be off and running most times. The clip-on bars makes steering feel a little heavy, and depending on where you sit on the longer café styled solo seat your knees can get in the way of the ’bars turning at low speeds, if this is happening to you, loosen the bars and increase the angle to give you more clearance. This should also lighten up the steering a little bit as well. Such is the ethos of this bike that you could even throw on a different set of ’bars if you so desire. It stops pretty well for the single disc, I’ve ridden similar styled small capacity single cylinder machines from the late ’70’s and they haven’t had the best braking ability after 35 years, and this gave me confidence on the SR400 and can set it apart from buying an older Japanese bike and customising it with a stronger braking package, where you will usually end up swapping out most of the front end for brakes that will give you the same confidence. Like I said earlier, it does rev fairly low but it does love a squirt and really comes into its own when you wind it out. Going into corners a gear lower than normal will bring about a big smile and is just as easy if you want to cruise through the twisties.

If the custom bike movement is your thing or you think it is, like it is becoming for a lot of people at the moment, check out the new Yamaha SR400. You don’t have to have tattoos, a beard or wear plaid shirts. The simple fact is this bike has proven itself through years as a canvas to chop, change or keep standard. Whatever your desire is, this bike will take you there and back. You will look cool on this Yamaha SR400 custom, that is undeniable. Chicks might dig it, and the ones that do will be worth sweet talking. What you will also find is that guys will stop you wherever you park it, when you get on it, even when you’re stopped at lights to stop and compliment it. You will get asked questions about it, told how good it looks and that you have done a good job. They will fall over if they found out it is actually brand new. It’s a pretty cool thing with this bike that you never know who you will end up chatting to, getting ideas from and giving ideas to.

Yamaha’s latest cruiser under the ‘Star’ brand is a 942cc V-Twin urban-bobber for the new age named the ‘Bolt’. We took it for it’s first Aussie ride. […]

Movistar Yamaha MotoGP’s Jorge Lorenzo claimed his first victory of the year on home soil at the Gran Premio Movistar de Aragon ahead of Aleix Espargaro and Cal Crutchlow. […]