YAMAHA has given the FJR1300 minimal updates since it was first released around a decade ago. It’s always been a fantastic sports touring machine, and while the current 2013 update is more about the look than engineering, it’s still a road burner par excellence. 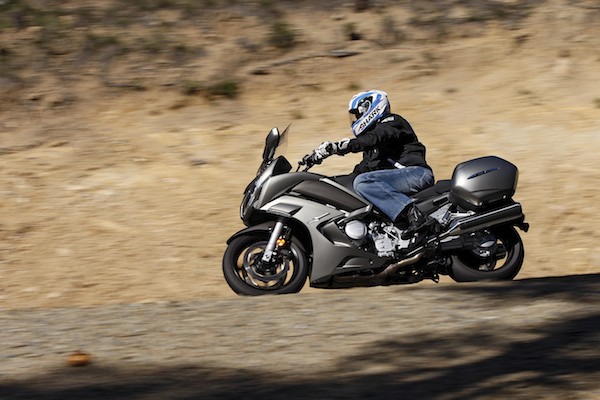 In the showroom
Most of the underpinnings of the FJR, by that I mean the engine, shaft drive, frame and wheels are the same as the 2012 model, but there’s quite a few changes in the styling department.

Basically styling wise the only items held over from the previous model are the panniers, rear and tank. Everything forward of that has been tweaked.

The electric screen has a new shape, and sitting underneath it is an air duct to get cool air to the rider, but also to reduce buffeting. When you push the go button of the screen it goes up twice as quick as the previous model, and stays where you last left it when the ignition is turned off. 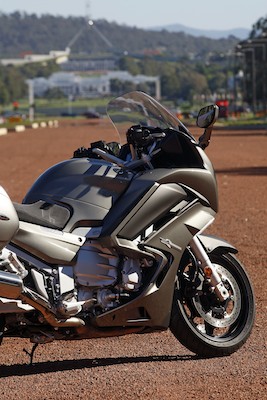 The fairing also has a manually adjustable air duct which allows you to get the warm air from the engine either wafting up to you in winter or exiting stage left or right in summer.
Up front the headlights have a funky new shape and LED running lights, while the new blinkers are LED too.

Engine changes for 2013 include a traction control system; 2-position power mode; redesigned throttle bodies; direct plated cylinders which do away with liners, making the engine lighter; cruise control; exhaust system.
The FJR’s engine has always been a strong point of the bike and it’s no different now.

Power is designed to be strong pretty much everywhere. ABS comes standard, and the linked braking system allows you to gently apply the rear brake without activating the front calipers.
If you need to get on the rear brake harder then the front two chime in as well.

Yamaha has played with the suspension as well, with the 48mm forks receiving new internals which include a different spring rate for smoother operation. You can play with preload, rebound and compression damping.
The rear shock has only two preload settings, and has rebound adjustment only.

A number of accessories are available, from removable inner pannier bags which allow you to leave the main panniers on at overnight stops, also Akrapovic sports mufflers which no doubt look and sound horn. Really, everything is covered, whether it’s for bling, comfort, or crash protection.

Ready to ride with a full tank of fuel the FJR weighs 289 kilos, not light, but then not heavy when compared to many of its competitors either.
The 25 litre tank will let you cover over 400 kilometres pretty easily, unless you are treating it like a race bike

It will only come into Australia in one colour, and that is ‘Frosted Blade’, or silver to most of us. It gets the typical two-year parts and labour, unlimited kilometre warranty.

If this particular model doesn’t suit for whatever reason, but you still want an FJR1300 you should check out the FJR1300A Touring Edition which is a Police Spec 2012 model.
You can get it in either single or dual seat configuration, and it comes with a taller screen, taller handlebars, footguards and an exhaust heat shield. 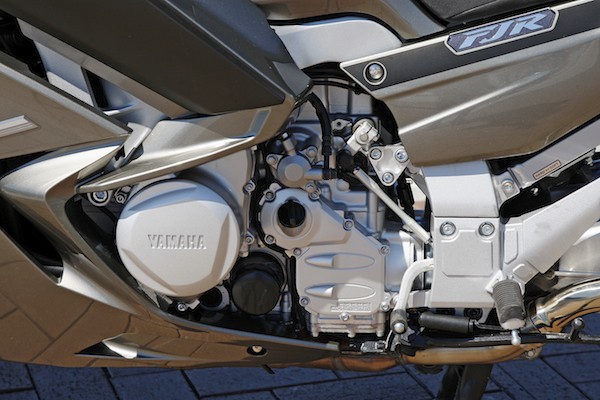 On the road
Yamaha says it has the best power to weight ratio of its class, and I won’t argue that. The fuel injected four cylinder engine in the FJR is an absolute beauty. Outright power is very good, and so is the torque.
Having said that the engine does like revs to be at its best. When the revs hit 5000 things start to happen quite quickly. Top speed is 250 km/h, most likely more if you are lighter than me.

The suspension is basic when compared to others in the class with electronic suspension adjustment. Yamaha does make such a machine which also comes with the clutchless gear shift.

However,  this model won’t be imported into Australia due to the extra cost which Yamaha believes would not be justified by the vast majority of FJR buyers.
It was funny then that one FJR lover saw the bikes in the main street of Braidwood, tracked us down while we were enjoying a cool drink and promptly said he wanted to buy one with the clutchless set up.

The 2013 FJR1300 is $24,999 which is a very similar price to the new Triumph Trophy SE, with electronic suspension so I wonder if sales will be affected.

On the FJR the rear shock has two preload settings, hard or soft. Soft is about the same as hard on the previous FJR. There is also rebound adjustment which can be changed by hand with no tools required.
On the forks you can adjust the preload, and damping is done separately, rebound on one fork and compression on the other.

I never put it on hard on the rear, and I softened the fork preload by one full line which made the bike turn better, getting more weight over the front under brakes.
Overall the suspension worked a treat and I had no complaints.

Road conditions were good to average so I think Yamaha has done a good job here. It’s still a big bike and you need to muscle it into turns when you are punting quickly, which this bike is more than capable of

I really liked the riding position but I think some riders will prefer the electric screen to be able to go higher than it does. This is in part due to the seat height which is taller than I expected.
There’s two seat positions. It’s also a pretty sporty riding possie for a bike like this. If you put the screen down all the way the bike feels much smaller than it is.

I sampled both power delivery modes and would only bother with the lower power mode if it was raining, as the power from the 1300cc engine is very smooth anyway.

Verdict
You can ride this bike very quickly, and if there were no speed limits you could cut down interstate travel times markedly. This comes down to how easy the bike is to ride fast on the open road.

Cruising at 160 km/h will hold no issues for this bike. Sure, there are lots of bikes which can do this but not many bikes let you do it all day. The FJR1300A does, if the road conditions allow it.

I’d like to ride the electronic suspension version of the FJR to see how it compares with the ‘normal’ suspension model we will get in Australia, but it would want to be good to be substantially better than what we get.

Great bike, I think they will sell well.

BMW has been an innovator for many years, and the fully faired R 100 RT was one of the first proper touring bikes made. […]