IN the latter part of 2015, Ducati started teasing the public with a series of videos which alluded the marque either was set to release its own fragrance or a motorcycle completely different to anything else coming out of the Borgo Panigalé factory. All we knew at that point was: it was ‘X’; and it was black – elegant, rough, explicit, mysterious, general and brutal. We had to play the waiting game to find out more.

Ducati premiered its 2016 models in a live-streamed event which confirmed its new direction to the world – disrupting the traditional motorcycle unveiling in an Apple-esque, sweaters over leathers presentation of fun, excitement, and of course, X. Ducati CEO, Claudio Domenicali said at the event black is a different world to the red hues the company is renown for, “black is a change in position,” he announced to the world. The XDiavel and XDiavel S are the motorcycles at the forefront of this exciting shift. 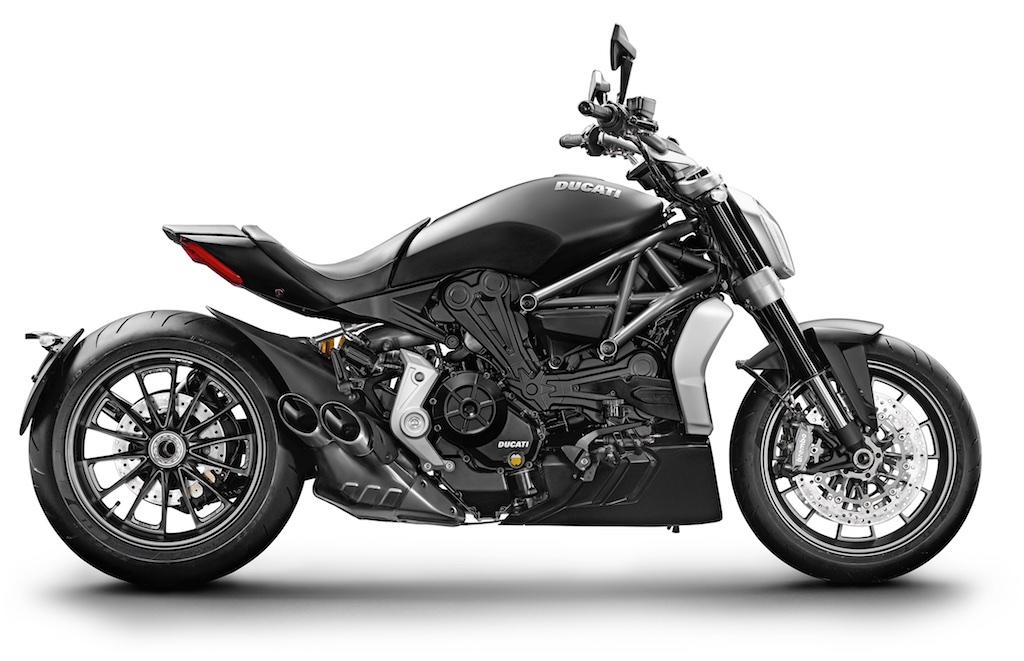 Ducati press material describes the XDiavel as the intersection of two worlds, the ‘gentleman’ and the ‘bastard’ – a mix of low speed, technology, cruiser culture, Italian beauty, feet forward controls and cornering performance – but they haven’t just slapped a set of forward ‘pegs on the same model, painted it black, crossed their fingers and hoped it will sell. The XDiavel is radically different to the Diavel which preceded it. Although the silhouette is very similar, the half-fairing around the radiator has been removed, leaving a naked presence by showing off the bare trellis frame, aligning the top half of the XDiavel more within the looks of the Monster family.

The engine is completely new – a 1262 cc Testastretta variant and the second to feature Desmodromic Variable Timing (DVT). The DVT system continuously varies the position between the camshafts and the crankshaft in the range between minimum and maximum overlap, which increases performance, user-friendliness and also provides better fuel-efficiency. The other differences you will notice from the earlier Diavel is the refinements which suit the X ethos of elegance – it means making things ’nicer’ like hidden water hoses and machine polished detailing on the ’S’ model’s engine and it does make the bike look extra special.

The chassis is completely different – the XDiavel has a single-sided trellis swingarm and the hidden under slung rear shock has been replaced for an offset unit which can now be gazed upon. Both the XDiavel and ’S’ models receive cruise control, Bosch cornering ABS units for added safety and get this – a power launch feature (DPL). Press the DPL button on the right switchblock to set the amount of electronic intervention, hold the throttle at the stop, let the clutch out and prepare for an adrenaline rush of a lifetime!

There are a few other differences between the XDiavel and ’S’ to mention besides the polished engine detailing. The big one performance-wise is the front brake – the ’S’ model receives top-spec Brembo M50s which actually have slightly smaller pistons over the standard XDiavel featuring Brembo M4-32s, but the M50s are top spec – the consumer equivalent to wet weather brakes in MotoGP. The rest is aesthetic. The XDiavel has a matt finish on the engine and tank, while the ’S’ is glossy and has a few extra-premium parts including wheels, swingarm, seat, mirrors, side plates and a daytime running light.

DUCATI has unveiled a brand new Monster 821, a mid-size entry for the third generation of the iconic naked model. […]

I NEED to get one thing straight about the Ducati Scrambler before I go any further. Ducati is marketing this bike as a whole new brand, Scrambler, so therefore I will refer to it as only a Scrambler from now on. […]