After 25 thrilling laps, Aprilia Racing Team’s Marco Melandri (pictured above) won the opening race of the day at Laguna Seca.

Starting from pole it was Tom Sykes (Kawasaki Racing Team) who initially took the holeshot into turn one ahead of the works Aprilia duo of Marco Melandri and Sylvain Guintoli who both passed the reigning champion at the end of lap one after Sykes made a mistake at the Corkscrew.

Chaz Davies (Ducati Superbike Team) crashed spectacularly from 4th on lap two as the leading three began to edge away from the fast starting Leon Haslam (Pata Honda World Superbike Team) who was promoted to fourth after the Ducati rider’s departure.

By quarter race distance, the circuit lap record set in 2013 had been smashed and the top three riders had a comfortable gap over the chasing pack.

As the race entered the final third, the tense battle at the front intensified as Guintoli applied the pressure to his Italian team mate with Sykes watching the action unfold in front of him before the Italian broke away.

At the flag it was a rather spread out affair with Melandri taking the win, his third of the season ahead of Guintoli and Sykes who claimed the final podium place.

In the battle of the EVO riders it was David Salom (Kawasaki Racing Team) that took the honours coming home in a solid 10th with Niccolò Canepa (Althea Racing Ducati) 11th and Sylvain Barrier (BMW Motorrad Italia) 12th.

Leon Camier (MV Agusta Reparto Corse) was classified 15th and took the final championship point on his debut for the Italian team.

Race 2: Sykes wins a hectic Race 2 at Laguna Seca
The second WSBK race at Laguna Seca was as hot on track as the air temperature. After two red flags and restarts, Tom Sykes (Kawasaki Racing Team) came out victorious in the 7 lap sprint race to close the ninth round of the 2014 eni FIM Superbike World Championship. 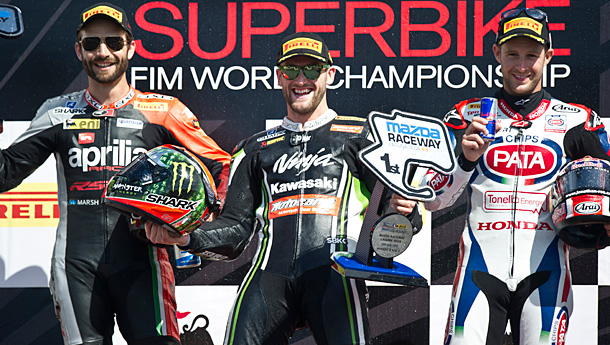 Thanks to his 22nd career win, the reigning champion continues to lead the championship, 44 points ahead of Sylvain Guintoli (Aprilia Racing Team),who was second in both race one and two.

Tom Sykes: “The aim was to win the race. Obviously race 1 was a big disappointment but we made a number of changes on the Ninja for Race 2. The bike felt OK, better than in the first race and then with every red flag we added little tweaks. What can I say, I’ve got a fabulous bunch of guys working for me. My wife sent me some inspiration. I had some great pictures of my daughter which put a great smile on my face. I’m sure people watching back home enjoyed it as much as I did. I’ve got a few days to really enjoy myself here in California, I’ve got some big events coming up with Kawasaki and I can’t wait to go into summer break.”

Sylvain Guintoli: “This is not a loss. We were looking for some points, but Tom is very strong in a short race like this one. About the two red flags I thought maybe this is destiny, like it happened last year. In the first restart Tom was fast and I just tried to hang on to him, but in a seven lap race, it is very difficult, I just tried everything but I was never in a position to attack him. Once again I gave my best. These are two strong results, but for me are not enough. We have to work during the summer break to come back really strong.”

Jonathan Rea (Pata Honda World Championship) completed the podium of the second encounter, finishing on a high note in what has been his first ever visit to Laguna Seca.

From the first start it was Sykes who once again grabbed the holeshot into turn one and as the packed field sorted themselves out around the first few turns it was Guintoli and race one winner and team mate Marco Melandri who slotted himself into second and third ahead of the fast starting Eugene Laverty (Voltcom Crescent Suzuki).

Guintoli applied the pressure immediately and after following the reigning champion for a couple of laps made his move, taking the lead into turn 6 on lap 5 only to lose it straight afterwards, as Sykes successfully fought back. Melandri also seized the moment to take advantage of an off line Guintoli to move into third as the battle at the front now raged between six riders after Davide Giugliano (Ducati SuperbikeTeam) and Toni Elias (Red Devils Roma Aprilia) looked to get in on the act.

Lap 11 saw the red flags shown after Alex Lowes (Voltcom Crescent Suzuki) suffered a spectacular crash at the Corkscrew. The British rider was taken to the medical centre for further checks but got away with no fractures.

After a short delay the race was restarted over 7 laps with grid positions decided by the race positions prior to the stop. That meant Sykes was still on pole with the Aprilia duo of Melandri and Guintoli alongside. Row two for the restart saw Laverty, Elias and Giugliano.

When the race resumed the action was fast and furious but after only one completed lap the red flags were out again as Sylvain Barrier (BMW Motorrad Italia Superbike Team – EVO) crashed out on the main straight. The Frenchman, who was conscious, was taken to the Medical Centre for further checks that revealed a dislocated and fractured left subtalar joint.

On the third attempt, the race distance was completed. Sykes took the win ahead of Guintoli and Jonathan Rea who completed the podium places after Marco Melandri crashed out of the lead, followed a short time later by a charging Davide Giugliano. A disappointing end of the race for both Italian riders, especially for Melandri who looked capable of taking his second double win of the season.

Marco Melandri: “I got a perfect start in race one, even though I was a bit worried because Tom usually tries to pull away in the early stages. When he made a mistake at the Corkscrew I thought it was the right chance to push to the limit. I set my pace and kept focused, trying to avoid any mistakes. It’s a shame about race 2, at the third restart I made a couple of mistakes whilst shifting gears and I thought there was a gearing problem on my bike. I lost my concentration and when I realised it was all OK, I went too hot at the last turn. I’m really sorry for that, because I think the double win was within our reach, but I’m happy with the way we worked this weekend.”

OGGY Knobbs are now available for the 2015 Kawasaki Z250SL. The aluminum compression components are made from aircraft grade 7075 T6511, the bolts are de-embrittled, high tensile items, zinc plated and clear chromates, the “plastic” […]