I KNOW the Isle of Man TT is dangerous to participate in. Perhaps that’s part of the attraction, it’s not something I try to dwell on too much. The death toll is high, barely a year goes by without someone making the ultimate sacrifice. That is always in the back of my mind and that of most other racers I guess. At the same time I think everyone has the “it won’t happen to me” mindset.

“Today couldn’t have been worse. Everything was hectic trying to get the bike ready, things went wrong.”

I escaped relatively unhurt from a crash and a separate incident where my front tyre came off the rim on one of the fastest parts of the course. I was lucky. My team-mate Franck Petricola wasn’t so lucky. I have never before suffered the emotional turmoil that this year’s TT thrust upon me.

The TT is the ultimate test of man and motorcycle, that’s why it is held in such high regard throughout the motorcycling world. This year I was certainly tested on more than one front. Here’s a blow by blow account from my blog.

The first few days were spent catching up with friends, helping the team set up the massive awning, doing some laps in the car and signing on. Nothing special just getting back into the groove of the Isle of Man and getting over the flight from Australia.

Saturday night was the first practice session, mainly for Newcomers and lightweights. Not being a Newcomer I helped with Dan Harrison, the team’s Supertwin rider and Newcomer. He’s from Yorkshire in the UK, a hotbed of riding talent so it seems, and a top bloke too. He’s around my age and we all get on very well. You wouldn’t believe it but a mate of mine who has come over with me is also Dan Harrison. Then there’s Danny, another Yorkshire lad who’s a blast. He’s not riding, he’s just making us laugh heaps.

Dan broke down on his Newcomers guided lap with Johnny Barton, only getting about two miles in, poor bugger.

Not much happening today. It’s a lay day so we’ve done some sightseeing and some more laps. Tomorrow we go to Jurby Airfield for testing. It has a race track using an old WW2 airfield as part of the layout. The idea is for us all to get used to the bike before we attack the Mountain Course.

It was very cold but we went out. I was about to pull in on my second session because the weather was turning for the worst when I had a massive high side, really catching me out. The only thing I could put it down to was the right side of the tyre catching a curb and spitting it sideways, and because it was so cold there’s little grip. I was lucky to walk, well hobble, away from it. The bike hit me in the back during the crash but luckily I didn’t get any bruising. I spent some time in the ambulance but never needed to go to hospital. To say the bike was damaged is an understatement. Gary Carswell, a very experienced TT racer was killed recently at the very same corner during a club meeting. In hindsight I should have pulled in earlier, it was that cold no wonder the tyre had no grip. I feel lucky and unlucky at the same time.

As soon as we got back to the pits the crew was into ripping my bike apart, with parts flying in all directions. Later that would come back to haunt us as we struggled to find some of those nuts and bolts. Luckily my good mate Dan Harrison – no not the racer from Yorkshire I mentioned earlier – had come with us from Australia. Dan wants to race at the IOM and has come along to see what the go is. He’s also a mechanic and he knows his way around bikes. We raced against each other as teenagers and he knows how to pedal a bike too. He’s a smack talker but he’s a great bloke too. Everyone loves him.

We couldn’t get the bike repaired in time as we are waiting for parts to be flown over from the UK. I was able to ride one of the spare BMW S 1000 RRs, a 2014 HP4. Practice today was not timed so I have no idea how fast or slow I went. The bike was a bit of an animal but it was good to get some laps in even though I was very sore from yesterday’s crash. I coughed up some blood this morning but that’s gone now so all good I reckon.

Weather was average, I got two laps in but the wind was terrible on the mountain, like dangerously windy. I doubt anyone enjoyed riding their bike today. 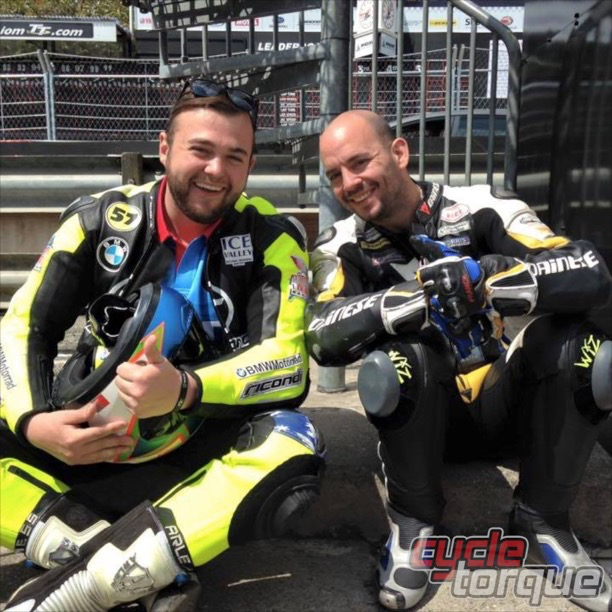 Today couldn’t have been worse. Everything was hectic trying to get the bike ready, things went wrong, Dan left a piece of cloth in the throttle bodies when we cleaned it, making the bike run funny. Plus a gear sensor decided to pack it in. We sledged Dan mercilessly but it wasn’t really his fault, just one of those things. Too many people working on the bike, things get missed, misplaced and forgotten. 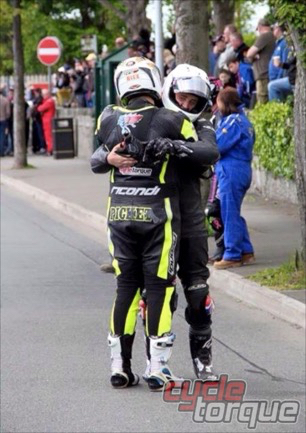 My bike was the last one through scrutineering, I was stressed and on my first lap my front tyre blew out at the end of Sulby Straight. I would have been doing close to 300 km/h at the time, the bike went into a tank slapper so I did the best I could to try and slow it down without slamming the brakes on. I was heading for a wall and I nearly bailed off the bike but the front wheel hit the curb and bounced me straight. I pulled up at Sulby Bridge. I’m lucky to be still walking and talking I reckon.

Then it got worse. A marshall told me my team-mate Franck had crashed and it wasn’t good. When I got back to the pits I found out he passed away. Everyone was in shock. I made the decision then and there to pull out of this year’s TT, and maybe real road racing for good. We had a drink for Franck, the little French master, down at the beer tent. Not fun.

I barely slept last night and this morning had a heart to heart with my father who told me he would stand by me, whatever my decision. He also said I couldn’t go in half arsed. If I was going to ride then I had to man up and put Franck’s crash out of my mind, save the tears for later.

Part of the problem was not knowing why my tyre went flat, there was no puncture the tyre guys could find, but the tyre valve cap had been put on slightly crooked. The speeds here are high and prolonged, and if the cap isn’t on right then pressure can go out of the tyre. I did have a slide on the front coming into Ballaugh Bridge and I should have stopped then to see what the problem was but I didn’t. A mistake I won’t make again.

Dad said he would prepare the bike himself and it would be there if I wanted to ride, and if I didn’t we would just push it back to the pits. I had a bit of a sleep-in while he was up the pits and when I woke up and after some soul searching I decided to ride. When I got to the pits I spoke to my team from last year about it, they were great. My Ice Valley team and I then had a bit of a meeting and we all decided to carry on for Franck because he loved the TT and road racing so much.

I went out nearly last and got two laps in. I got arm pump real bad but I think that was down to a combination of things, the stress from yesterday, my leathers being too tight on my forearms, and the front end being a bit harsh on the BMW.

My fastest lap was only a 116.8 mp/h but that’s okay seeing I was very pedestrian for the first quarter of the first lap. I’m number 57 and my 116.8 lap put me 58th in Superbike and 53rd in Superstock so the IOM TT organisers are spot on with their seeding of riders by the look of it.

We made some changes when I got in, softening up the front a bit and raising the gearing on the rear. This will ‘tame’ the bike a bit and lengthen the wheelbase. I’m hoping all this improves the bike because it’s a beast to ride around here.

Got two laps in tonight, made some changes to the bike and went a little bit faster than the night before but I never had a flying lap, pulling in after the first lap to clean my visor and adjust the rear shock settings. Besides the arm pump, which was only my right arm last night, all was good.

The team got another shock last night when I rode past a crash involving Graham English, at the 13th Milestone. My dad and I met him a couple of years ago over here but he’s raced at the Island Classic back home before with the UK team. He’s a great bloke, very friendly. Hope he’s OK.

Other than that spirits are high in the team, with the Superbike TT on tomorrow.

NORTON’s Isle of Man TT Aussie duo, David Johnson and Josh Brookes both finished inside the top-10 in both the Superbike and Senior TT races, June 4-9.   Senior TT Suzuki’s Michael Dunlop has won […]

Keep up with the latest updates from the Twitterverse throughout the 2015 Isle of Man TT here. #IOMTT15 […]

FROM your very first lap of the world famous and infamous Isle of Man mountain course your eyes are opened as wide as they can be, and all your brain power is focused on the job at hand. There is simply no space left for anything else. […]