Triumph has breathed new life into the Street Twin for 2016 by improving the performance and handling with more grunt, better suspension and updated styling.

The Street Twin is part of a wider Bonneville revamp for 2016, and it is a major revamp. You might call the Street Twin the ‘baby’ of the bunch, being only 900cc, as the new T120 Bonneville and Thruxton are 1200cc – and it’s these machines which have been getting all the publicity with their bigger motors and exceptional styling, which is leaving the Street Twin as a bit of a wallflower – which is a shame, because as you’re about to discover, the Street Twin is a very sweet motorcycle. 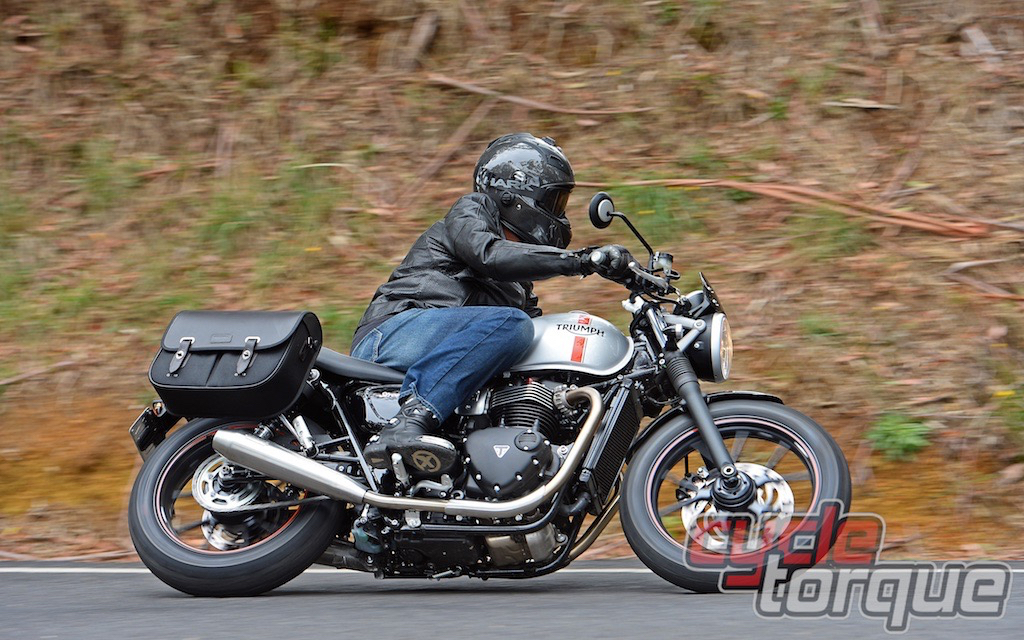 Powering the Street Triple is Triumph’s new 900cc HT (High Torque) liquid-cooled 8-valve parallel twin. With 18 per cent more torque than the previous model and delivered at just 3200rpm, the new Street Twin offers spirited performance.
Triumph has retained the 270 degree firing order, renowned for making parallel twins sound and feel like V-twins, and it’s better for it. It’s not exactly new technology, and it reminds me of a bloke who back in the 1980s did something similar to an early Triumph classic race bike. His name was Lee Kernich, probably still is, and the bike was pretty successful back in the day. No real relevance to the modern Triumphs just an interesting anecdote for you Trumpy lovers out there.

I already mentioned liquid cooling but there had been plenty of thought into keeping the plumbing as hidden as possible for better ‘old school’ aesthetics. The radiator itself is well hidden between the front frame down tubes.
During the press conference I jumped the gun a bit, as I’m unfortunately sometimes known to do, and started asking questions about power out of sequence of the slide show. My mind was thinking power! The slide show was still on the history part. Eventually the slide show caught up but the upshot is there’s one less horsepower than earlier models despite the big increase in torque. What! But the promise was we would love it.
The Street Twin might look retro, but there are plenty of modern touches, like switchable traction control, ABS and ride-by-wire technology. There’s also a slip-assist gizmo for better clutch feel and reduced lever effort. It’s not a slipper clutch, and had me wondering why bother but I guess there has been complaints by some riders in the past so changes were needed. All jokes aside, that is something Triumph is very good at, responding to design flaws, often only really highlighted after extended use by owners.

The Street Twin rides on an 18-inch front wheel and 17-inch rear, with the wheels kept pointing to the ground via upgraded forks and longer rear shocks with better damping control at both ends.
There’s also a new chassis, one designed to provide neutral steering, stable highway riding and confidence in the corners. 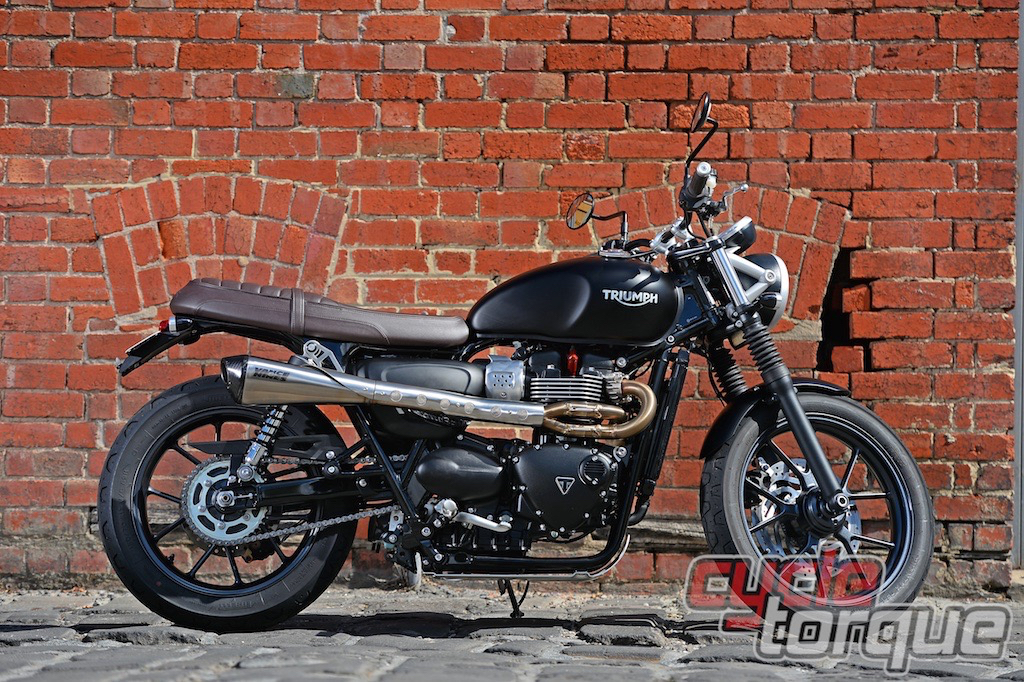 Triumph has entered a relationship with renowned American tuning house Vance & Hines to provide a variety of exhaust options for the Street Twin range.
There are some 150 new accessories for the Street Twin – pipes, luggage, bling and more. There are three distinct kits available, Triumph is calling them Inspiration Kits. 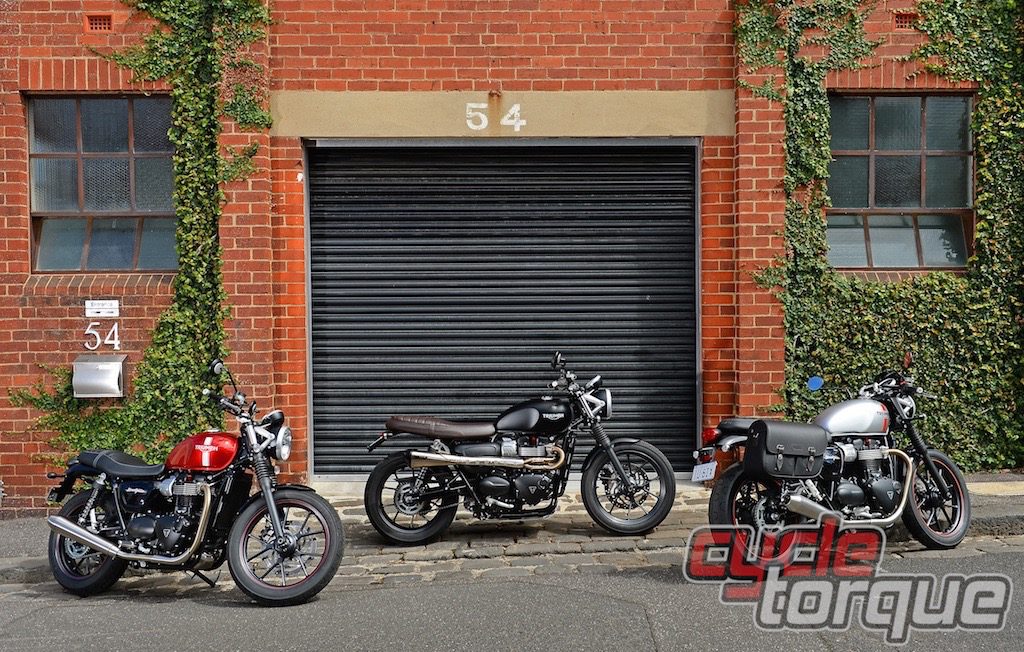 Scrambler: in this kit you get a brushed high level V&H exhaust (for off road use only, yeah as if that’s going to stop you). A rear guard removal kit (think tail tidy and you will know), brown ribbed seat, brown ‘barrel style’ or ‘gum’ hand grips, LED indicators and sump guard. Cost is $3,123 + fitting.

Now this is a guide really, you can put a scrambler high level exhaust on your bike, with the fly screen of the Urban and the black ribbon seat off the Brat Tracker if you like. The possibilities are near endless. And I know you’re just itching to ask why the Scrambler kit is dearer than the other two: it’s because the exhaust is a full exhaust, header pipes and all, not just slip on mufflers. Yes it does look nice, but it sounds freakin’ amazing too.

THE urban jungle may be the grounds in which this tiger likes to play, however it’s the unassuming manners which make the 1050 Tiger a machine which proves tigers are not always an aggressive beast. […]