Kawasaki RacingTeam’s Tom Sykes (above) scored his first career double at Donington and in doing so moved to within four points of the championship lead after five rounds. Having set a new track best in Superpole on Saturday Sykes rode brilliantly and almost faultlessly in each 23-lap race at Donington to score not only his first double win, but take a new lap record in race two, a 1’28.074, set on lap four.

This marks Sykes’ first perfect weekend in the premier class and puts him second in the championship, four points adrift of Aprilia’s Sylvain Guintoli.

Race 1
Tom Sykes rode a flawless race up front for 23 laps, displaying pure class and outstanding race craft. Despite a not so easy first part of the race, Marco Melandri (BMW Motorrad GoldBet)  clawed his way back to second place after a successful overtake manoeuvre at the last turn, on lap 16, over championship leader Sylvain Guintoli.

Following a competitive first part of the race Jonathan Rea (Pata Honda World Superbike), couldn’t keep up the pace with Sykes and was forced to ride defensively to a final fourth position. The Ulsterman finished ahead of Frenchman Loris Baz (Kawasaki Racing Team) – who had an up and down performance in race one – and Eugene Laverty (Aprilia Racing Team). The works Aprilia rider had a hard time after running off-track during lap 7 at “Fogarty Esses”, and continued to struggle as the race went by.

Chaz Davies (BMW Motorrad GoldBet SBK), was able to stay with team-mate Melandri in the early stages but found it difficult to push hard later on in the race. Leon Camier (FIXI Crescent Suzuki) withdrew early in the race following a crash at “Goddards” on lap 3. Team-mate Jules Cluzel finished ninth ahead of Michel Fabrizio (Red Devils Roma Aprilia).

Race 2
Sykes pulled away from the chasing pack in the early stages and managed a 7 seconds lead up to the chequered flag, finishing ahead of the works Aprilia duo, Sylvain Guintoli and Eugene Laverty. 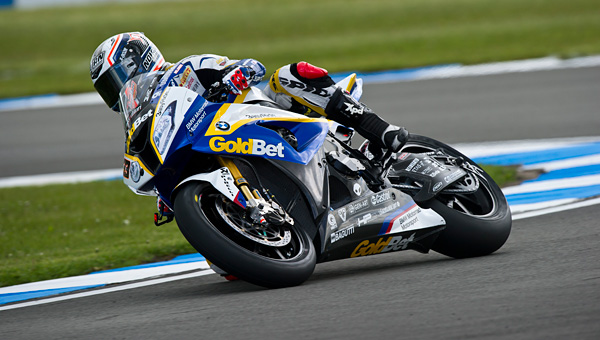 Melandri (above), ran off the track at ‘Fogarty Esses’ but quickly rejoined the race to end up fifth behind the competitive Davide Giugliano (Althea Racing Aprilia). Works BMW rider Chaz Davies finished a credible sixth ahead of Frenchman Loris Baz (Kawasaki Racing Team). 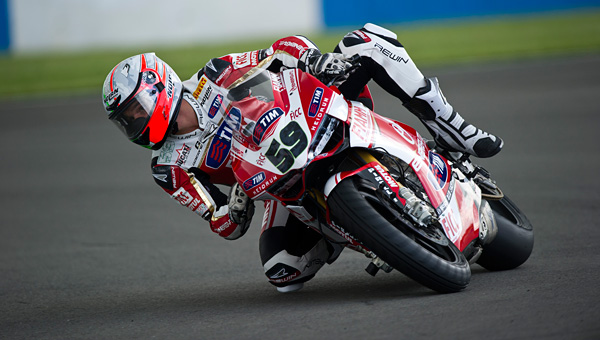 Canepa (pictured above) was left flying the flag after Carlos Checa’s withdrawal from Race 2 due to left shoulder problems, and Ayrton Badovini’s crash at Turn 2 on lap 19.

The “nightmare weekend” for Leon Camier continued with another low-speed crash at turn 12, with the Englishman able to get back on track for a final 13th place.

After doing his best to line-up his CBR 1000 RR on the grid, Leon Haslam (Pata Honda World Superbike) was forced to withdraw from the race due to his fitness condition. 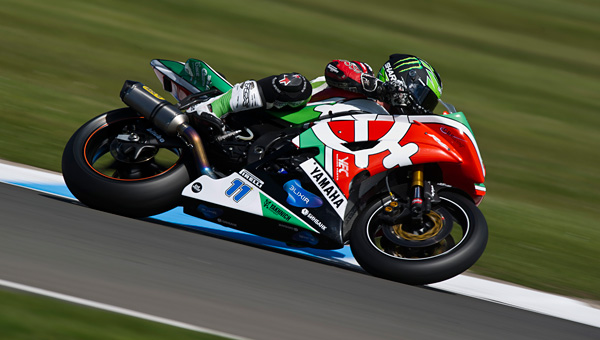 Roberto Rolfo (Parkingo MV Agusta Corse) scored a sensational third for the Italian brand, that was last seen on a World Championship podium in 1976: that time was Giacomo Agostini to win the 500cc race at Nurburgring. Rolfo put up an outstanding recovery from a 15th slot start on the grid to give Giuliano Rovelli’s squad the first rostrum finish in Supersport since Portimao 2011.

Round 6 of the eni FIM Superbike World Championship at the Autodromo Internacional do Algarve in Portugal saw Marco Melandri (BMW Motorrad GoldBet), pictured above), taking out race one and Eugene Laverty (Aprilia Racing Team) on top of the podium in race two. […]