BORN from the imagination of a Manga artist, introduced in Middle Earth, ridden through fiery mountains and deep gorges, a new legend has been born.

OK, none of the above is true, but I thought it sounded good – the bike does look like a manga-fan had a hand in drawing it up, Suzuki did fly Cycle Torque to New Zealand for the launch, we did ride it over hill and dale and the bike is a Good Thing, but Suzuki’s new V-Strom 1000 ABS is not likely to become legendary.

Then again, the V-Strom 650 is a bit of a legendary machine, it’s such a capable machine which is very easy to own; inexpensive to buy, cheap to maintain, comfortable and fun – they are the reasons it’s become a huge seller.

Regular readers will know the Cycle Torque crew love adventure bikes, so spending a couple of days travelling to spend a day riding the new V-Strom wasn’t considered a high price to pay, especially with the launch being in New Zealand.

NZ is simply one of the best riding countries in the world – good roads, fantastic scenery, light traffic and a relatively understanding populace makes Middle Earth a great place to experience on two wheels. And the bike lived up to my expectations, too.

Compared to the outgoing V-Strom 1000 it’s lost a little weight, gained a few horses, been fitted with the latest electronics and copped a neat restyle. V-Stroms – both the 650 and 1000 – have always been at the softer end of the Adventure bike range, with dirt capabilities which are closer to GSX-R than RM-Z.

That said, they firmly sit in the ‘Any Road’ category, bikes which can run happily along anything from a freeway to a fire trail. 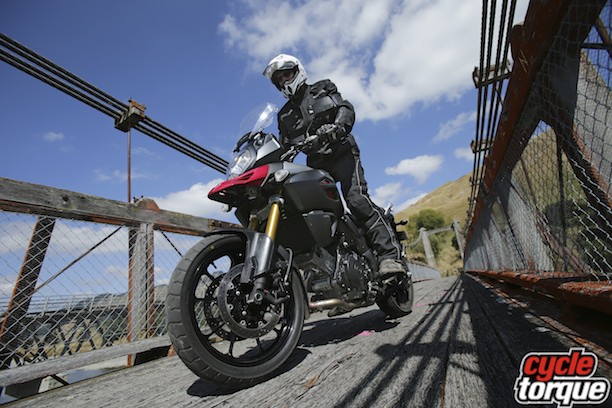 The first V-Strom was introduced in 2002 and sold really well, catching some of the opposition unawares, but Suzuki didn’t run with the model strongly – in contrast with the 650, which is a big seller – and the 1000 was left to languish, effectively unchanged for over a decade.

But the Adventure bike market is one of the few market segments showing real growth since the GFC, so an update was scheduled and with the old bike no longer even available in many markets around the world (because it couldn’t meet emission laws due to a lack of catalytic converter) Suzuki started teasing us with the spec and features of a new V-Strom 1000 a couple of years back. 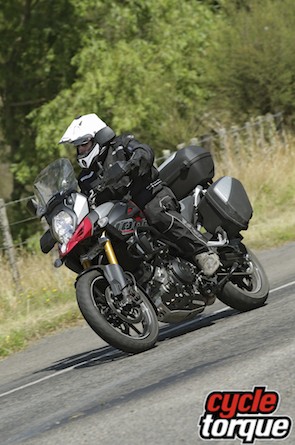 It would have ABS, traction control and more power – and it would look better too, but would retain the long touring range, the big V-twin heart, comfy riding position and economic price. All that paragraph is absolutely true.

The new bike Suzuki claims to have invented the adventure bike duck beak front guard way back with the DR-BIG in the dim, dark ages of late last century. BMW popularised it on the Boxer GS machines, but Suzuki’s grabbed it back for the nose of the new V-Strom, and the bike’s styling flows from there.

Gone is the huge tank, a slightly smaller but much better looking version in its place. The back end in particular is impressive, lightened up and good looking in that tough, adventure style. The engine has received comprehensive updates.

Many, many parts have been refreshed, redesigned or re-engineered. A larger bore has boosted capacity 41cc to 1036 although the larger pistons are the same weight as the outgoing models.

Much of the top-end is unchanged, but the bottom-end and transmission have received comprehensive updates. Power and torque are boosted a couple of horsepower and Newton Metres respectively, which is insignificant, but maximum torque now arrives at 4000rpm, which is not.
This bike grunts out of the turns, overtakes and carries a load easier than the old model.

The engine is very smooth, with just a hint of V-Twin rumble getting through to the rider. The gearbox now has a slipper clutch and a taller top gear for more relaxed touring. Adventure bikes are, after all, large capacity machines designed to take on the big trip over rough terrain.

The suspension is USD fully adjustable forks at the front and a single rear shock at the rear. Although not the latest top-spec suspension, Suzuki’s equipped the new V-Strom well – suspension which works fine for most riders most of the time, without incurring high costs or requiring advanced electronics. Most riders will set-and-forget the front forks – I don’t think any of the testers on the launch played with the settings at all.

At the rear there’s a large remote mechanical knob to adjust the rear shock preload, which means it’s the job of a few seconds to adjust the bike to suit a passenger or load.

Toward the end of the first day I was starting to think I’d like to ride the bike with a bit more rebound damping as familiarity with the machine meant I was getting more comfortable driving hard out of turns, and that’s the sort of adjustment that’s available. 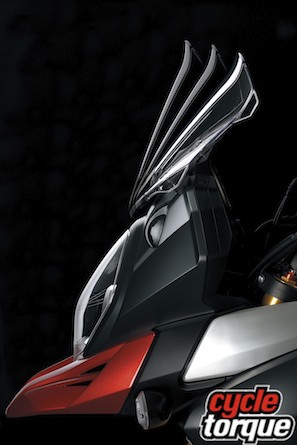 I reckon if I owned a V-Strom I’d tweak the settings in the first few weeks of ownership and then leave it all alone unless I was adding a passenger.

The traction control system monitors everything from wheel speeds to crank position and which gear you’re in to prevent slides and wheelies. It can be switched off or set to one of two levels – level one allows a little wheelspin or the front wheel to pop off the ground just a touch before it kicks in.

Level two kicks in even earlier. I’d use level two in the rain or on a slippery hard surface, level one everywhere else except some dirt roads, where maybe I’d switch it off if the traction control was kicking in too soon and reducing drive.

The ABS can’t be switched off and that will put off some hard-core off-road riders, but I am not convinced turning off ABS on a 228kg machine is a good idea for anyone except an expert.

A tourer in Adventure clothing
When you purchase a new V-Strom 1000 ABS, you’ll get an extra three keys – for the optional top box and panniers. So they will all be keyed alike, which is wonderfully convenient.

Also available are hand guards, centre-stand, heated grips, a tank bag – yep, the things you need for long-distance touring. The V-Strom 1000 ABS might look like an Adventure bike, it might be marketed as an adventure bike, but I reckon it’s a touring bike, and a damn fine one at that.

At the front there’s an adjustable screen – with a set of spanners you can adjust its height (set it to personal preference and forget). The angle of the screen can be adjusted without tools, on the fly – just push it back from the lowest of three settings and all the way forward to release the latches and it’ll return to the lost spot. Easy, handy and useful, although the taller touring screen is well worth a look if you’re going anywhere cold. 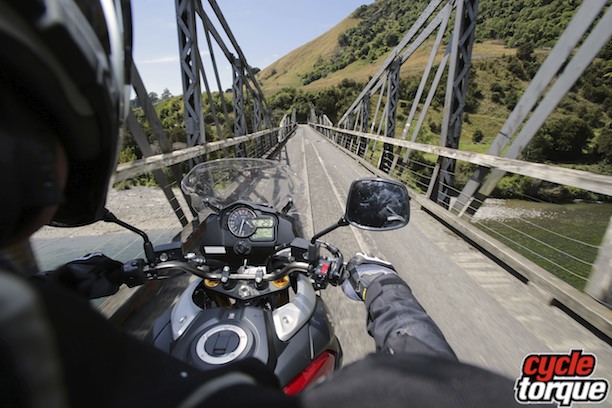 I was disappointed to learn Suzuki’s redesign had reduced the fuel capacity by two litres to 20, but the claimed improvement in fuel consumption should go most of the way to enabling a similar range – Suzuki’s claiming up to 50mpg (21.25km/L) if the bike’s ridden calmly.

I didn’t see those sorts of figures, but I wasn’t paying for the fuel… You can keep an eye on fuel consumption via the dash, which also displays the ambient air temperature in addition to all the usual things.

The controls for the traction control are on the left handlebar, and the dash displays the mode you’re in – and settings can be changed on the fly provided the throttle is closed.
I really liked the dash with its large analogue tacho, digital speedo, big gear indicator and twin trip meters.

I was a bit disappointed there isn’t a cruise control, for with all the electronics built into the V-Strom surely that would have involved a very small amount of computer coding.

Conclusion
Adventure bikes come in all shapes and sizes, with the most famous ones being capable of taking on trips across the desert. The V-Strom 1000 ABS has a softer heart than that, being designed primarily for the bitumen.

If you think that’s a criticism, maybe the new V-Strom isn’t for you – but if eating miles in comfort along just about any road in the country is your style, the V-Strom will do it for you at a price which is difficult to beat.

BENELLI may not be a household name, but for those riders looking for something a little left of centre, this niche manufacturer may be the look you are after. […]

AMID the mayhem of modern London traffic there’s an undercurrent of a ’60s subculture where rock‘n‘roll reigned as the anthem to a generation of leather and denim clad bikers with their slick hair and sleek attitudes. […]